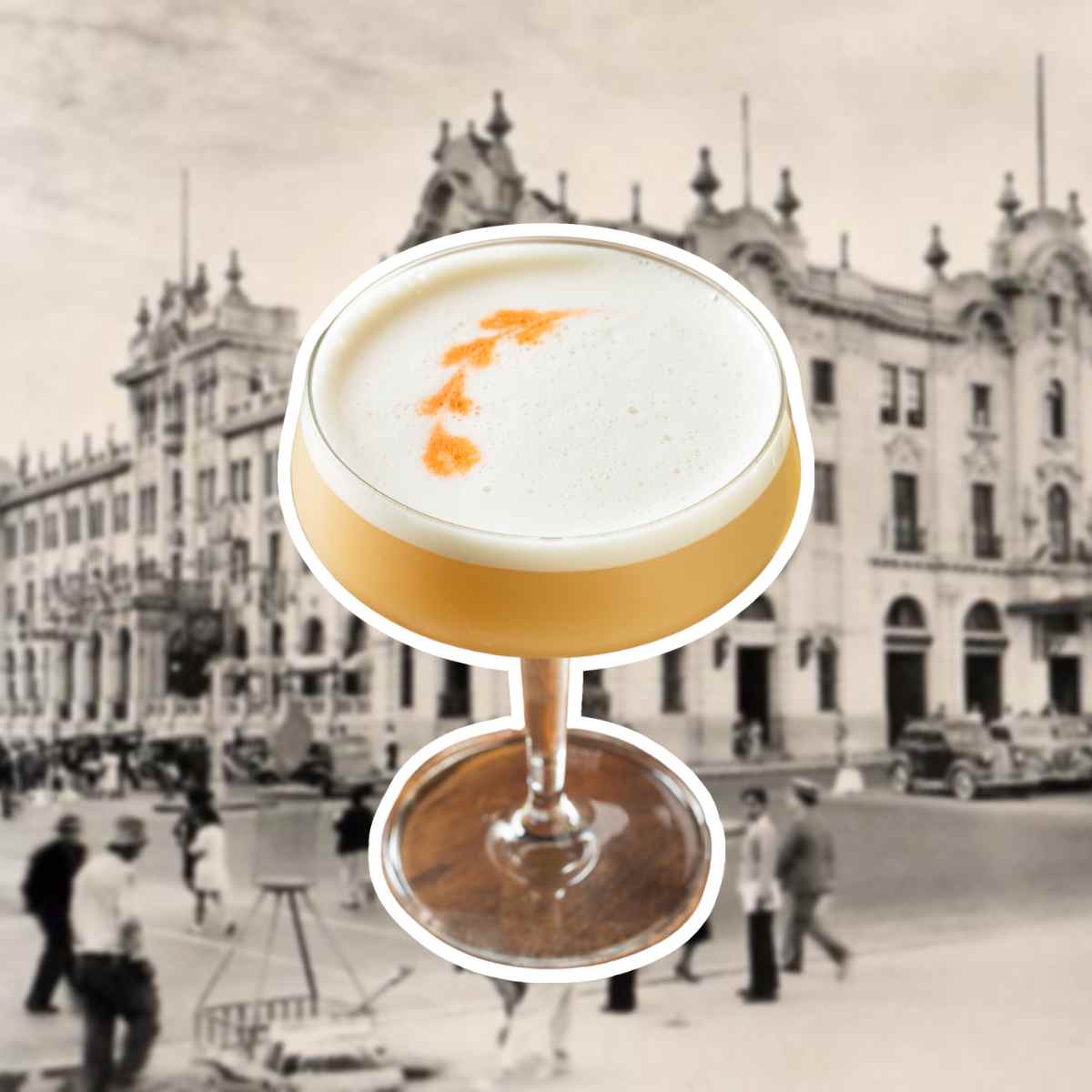 History of the Pisco Sour Cocktail

The Pisco Sour is one of the top cocktails from Latin America. It's tangy, creamy, slightly grapey, and simply delicious. However, its history is a little complicated.

The history of the Pisco Sour and its invention is fiercely contested - by Chile and Peru - like Pisco. Currently, most signs point to Lima, Peru. However, new findings keep entering the picture.

Here's how that has happened and everything else there is to know about the story of the #1 Pisco drink. A delightful blend of lime, syrup, egg white, a couple of drops of Angostura bitters, and the famous grape spirit Pisco.

Since you came here, I'm sure you have had at least one Pisco Sour, probably more. The drink is a real winner. Still, to make sure we're all on the same page:

The drink is a combination of Pisco, lime juice, simple syrup, egg white, and Angostura bitters. -Not to confuse with the more tropical Pisco Punch, including pineapple. It's another well-liked Pisco Cocktail but plays no role in the story behind the Sour.

Who invented this drink?

Many of the old and classic cocktail recipes have an unclear history. And more often than not, there are various stories about where a cocktail originated.

Usually, such discussions about the true root of a drink are calm and civilized. With the Pisco Sour, that debate is a bit different and a lot more animated.

It's two South American countries fighting passionately about who can claim the invention of the drink: Peru and Chile. And that's not the only thing where they cannot agree.

The national drink of Peru or Chile?

During the 1980s, a Chilean newspaper attempted to claim the cocktail for Chile once and for all. They wrote a story about the first appearance of the cocktail and declared Elliott Stubb, a British citizen, the inventor of the drink. Stubb once opened and managed a bar in Iquique (today belonging to Northern Chile, back then part of Peru) in the 1870s.

This tale survived for about 20 years before it became clear that it couldn't add up. When looking closer into the subject, the quote supposed to prove that Stubb invented the Pisco Sour really seems to have been about the Whiskey Sour, and new research painted a different picture.

In the late 2000s, Luis Guillermo Toro-Lira Stahl and Michael P. Morris set out to solve the mystery and trace the roots of the Southern American cocktail. They discovered that, seemingly, Victor Vaughan Morris Jones (the grandfather of Michael P. Morris) was the inventor of the Pisco Sour.

Originally from Salt Lake City, Morris senior moved to Peru in the early 1900s. When working as a Cashier for the Cerro de Pasco railway company, he mixed drinks for the inauguration of the so-called Oroya line, an impressive high mountain railway, still taking tourists' breaths away today.

Allegedly, Morris mixed up Whiskey Sours until they ran out of Whiskey. Due to a lack of alternatives, he switched to the widely available grape spirit Pisco.

Morris later moved to Lima and opened a bar in the Peruvian capital city named Morris bar. The place became famous for its Pisco Sour (not yet including bitters, as it seems). The guest book from these days still exists and shows many people praising the cocktail.

However, some may - quite understandably- think the undertaking by the younger Morris to prove this story possibly has been a little biased.

What backs the research, though, is the first mention of a drink called Pisco Sour. The Peruvian magazine Mundial stated in their April 1921 issue that, indeed, the drink was invented by one Mr. Morris.

The iconic hotel Bolivar and other renowned establishments in Peru's capital come into the picture because they took on former bartenders of Morris bar during the mid-1920s. With them, they brought the much-celebrated recipe of the Pisco Sour.

With the Pisco Sour now available in many of the city's venues, Morris lost one of his - if not the- major crowd-puller, which eventually cost him his bar and probably his health and life, as he sadly died 1929 at the age of only 55.

Hotel Bolivar, with its massive turnover in guests, though, was what introduced the recipe of the Pisco Sour to the greater public and made sure that the drink would not be forgotten.

Around the same time, in 1924, one of Morris' former bartenders, Mario Alfonso Bruijet Burgos, went to work at Hotel Maury. Allegedly, it was him who added the Angostura bitters to the Pisco Sour. While working there, he did some fine-tuning, giving us today's version of the Latin American cocktail.

In 2012, a Peruvian manual titled Nuevo Manual de Cocina a la Criolla, dating back to 1903, appeared on the scene. It was uploaded to the publishing platform issuu.com.

On page 32, it shows a drink recipe merely named Cocktail that asks for an egg, a cup of Pisco, a teaspoon of sugar, and some lime juice to be consumed before a meal. - Pretty much a Pisco Sour, if you ask me.

This new finding suggests that Victor Morris might not have been the inventor of the Pisco Sour after all but still would leave its origin within Peru. I'm saying might here because, as a matter of fact, Morris emigrated to Lima in 1903. That might or might not be a coincidence.

Thanks to the Craft Cocktail movement during the early 2000s the Pisco Sour is known all over the globe and has secured a safe spot on the list of top Sour Cocktails.

Also, it is an iconic cultural symbol for Chile and Peru alike. No journey to either country is complete without having had at least one. You can literally get it everywhere.

By the way: Since 2004, Pisco Sour Day has been celebrated each year on the first Saturday in February. First in Peru and now also in many other countries. So get your shakers ready to mix up some beautiful Pisco Sours after all the Dry January Mocktails.

More about the grape spirit

If you want to know more about the grape-based Brandy, its origin, the reasons for the uncertainty, and the measures both countries take to claim the invention, you can find all that in our guide on Pisco. Inspiration for drinks to try can be found in our list of the currently most popular Pisco Cocktails.