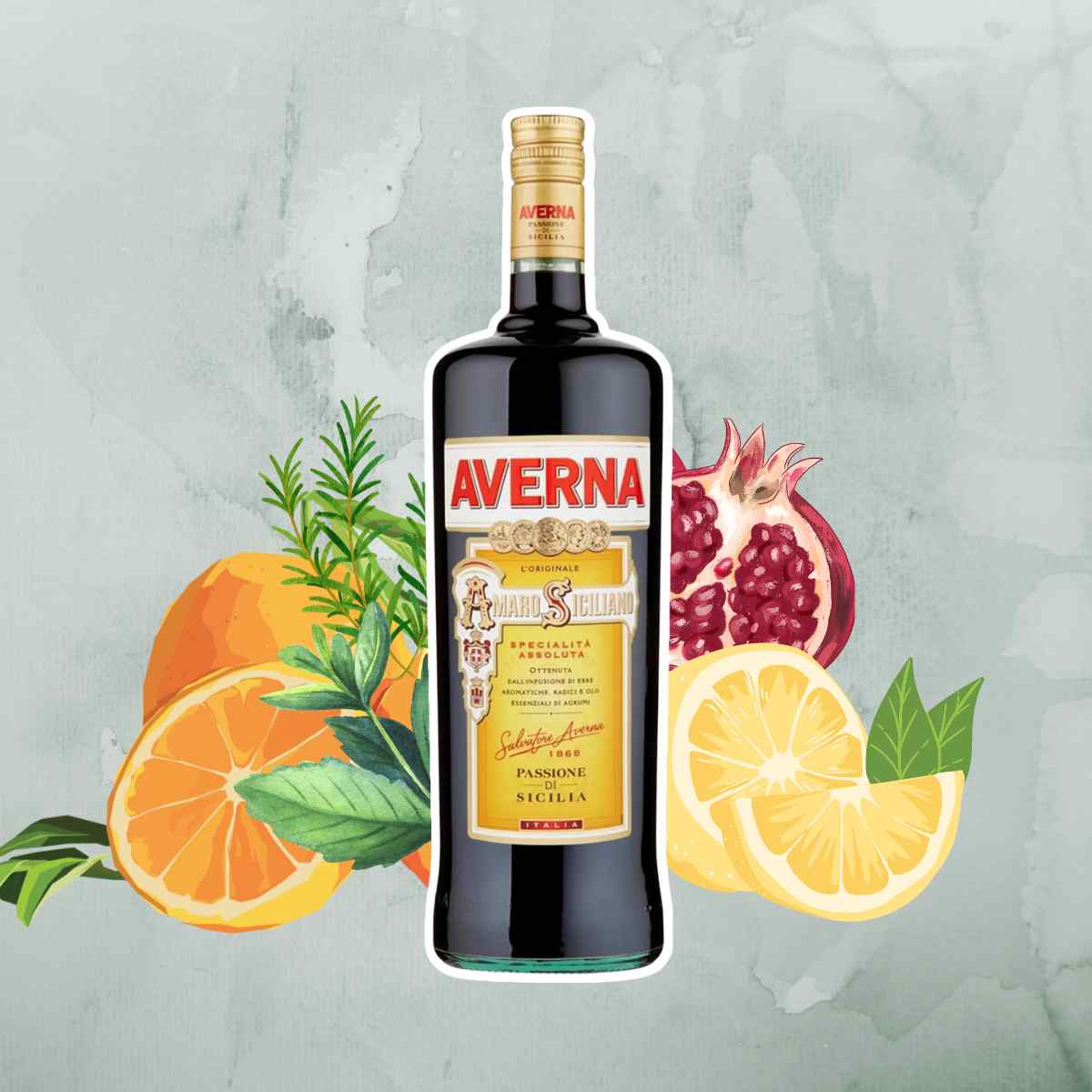 Averna is an Italian Amaro liqueur produced in Sicily. A bittersweet digestif is often served neat or on ice.

Amaro Averna is one of the most popular Amari in Italy. The bittersweet liqueur from Caltanissetta in Sicily island is made after a secret recipe. Infused with a combination of herbs, roots, barks, and fruits, the liqueur has an excellent balance between bitter and sweet.

What is it? | Ingredients | Taste | Substitutes | How to drink | Review | Cocktail Recipes | FAQs

Averna Amaro Siciliano is the full name of this Sicilian herbal liqueur. Named after Salvatore Averna, it first was produced in 1868.

Salvatore was born in Caltanissetta in 1802 and, after his teenage years, became an active and respected member of the community. He also was a benefactor of the local Abbey of the Holy Spirit. Eventually, a member of the Abbey gifted the secret recipe of their herbal elixir to Salvatore as a sign of gratitude.

Salvatore, aiming to treat this legacy with respect, began to produce it for personal use in 1868. He mainly served it to guests visiting his house. Only when his son Francesco began promoting Averna publicly did it rise to national and, eventually, international fame.

In 2014 Gruppo Campari acquired the brand as they did with many other Amaro brands like Aperol or Cynar.

The recipe of Averna, which includes herbs, roots, and citrus rinds, is a well-kept trade secret. Of a total of 60 ingredients that go into liqueur, only a few are known to the public. Among these are Pomegranates, juniper, mint, Sicilian lemons, rosemary, and bitter oranges.

All these components are soaked in a base spirit to infuse it with their flavors and aromas. How long this procedure takes is unknown, but it must be quite some time, considering how aromatic Averna is.

Averna is quite complex in taste. It carries notes of anise, chocolate, citrus fruits, licorice, gentian, myrtle, bitter oranges, juniper, and sage. You can also taste these underlying caramel notes that make Averna sweeter than most Amari.

The consistency of the liqueur is quite thick compared to other Amari due to the addition of caramel as a sweetener.

Each Amaro has a unique set of ingredients and thus varies in taste. That makes choosing alternatives a little tricky. In the case of Averna, you can try to replace it with rather sweet options like Ramazzotti or Amaro Meletti.

For more recommendations, take a look at our list of Amaro Averna substitutes. Depending on the intended use, different Amaro liqueurs work well.

How to drink Averna

Averna is one of the more approachable Amari as it's a bit sweeter and less bitter than most others. The best way to enjoy it is on the rocks with a slice of orange.

Amari are amazing digestivos. Presumably, the bittersweet herbal liqueurs help with digestion and are a common thing to order after or instead of a dessert.

That is also the best way to detect the different flavors in the liqueur. If the taste is too strong, adding a splash of club soda is also a way to enjoy the liqueur.

This is one of the most popular Amari for a good reason. The long list of ingredients makes the flavor profile rich and complex. The fact that it is more on the sweet side makes it an ideal choice for people new to Amari.

The thick consistency paired with a silky mouthfeel and a cola and caramel-like taste is not the best option to be drunk neat. However, it works amazingly well on ice.

If you want to use it in cocktails, pair it with dark and aged spirits like Rum or Whiskey first. Its herbal and spice-forward taste works best in this combination.

In modern craft mixology, the liqueur is often used as an ingredient in cocktails to enhance a drink's flavor profile. The herbal liqueur pairs extremely well with more complex spirits like Rum, Mezcal, or Whiskey.

One example of such a drink is our Mezcal Sour. Averna Amaro builds a deep flavor profile in combination with the smoky taste of Mezcal. A smoky, herbal, sweet, and bitter combination, which is a perfect base for a drink.

Another way to incorporate Averna in cocktails is as the substitute for Aperol is an Averna Spritz, a twist on the classic Aperol Spritz. The strategy to replace the common Amaro also works for the Negroni or Paperplane cocktail.

It tastes bittersweet, herbal, and spicy with hints of oranges. Overall, it's a rather sweet representative of Amaro liqueurs.

What kind of Amaro is Averna?

It's an authentic Sicilian Amaro with a rather sweet flavor profile. The liqueur is made from over 60 different ingredients, including pomegranate, bitter oranges, and Sicilian lemons.

What is the difference between Averna and Amaro?

Averna is a specific type of Amaro and therefore belongs to the family of Amari (plural of Amaro).

Is Averna similar to Amaretto?

No. Both are sweet liqueurs, yet, Amaretto is sweeter and almond-flavored, while Averna is herbal, spicy, and more bitter.