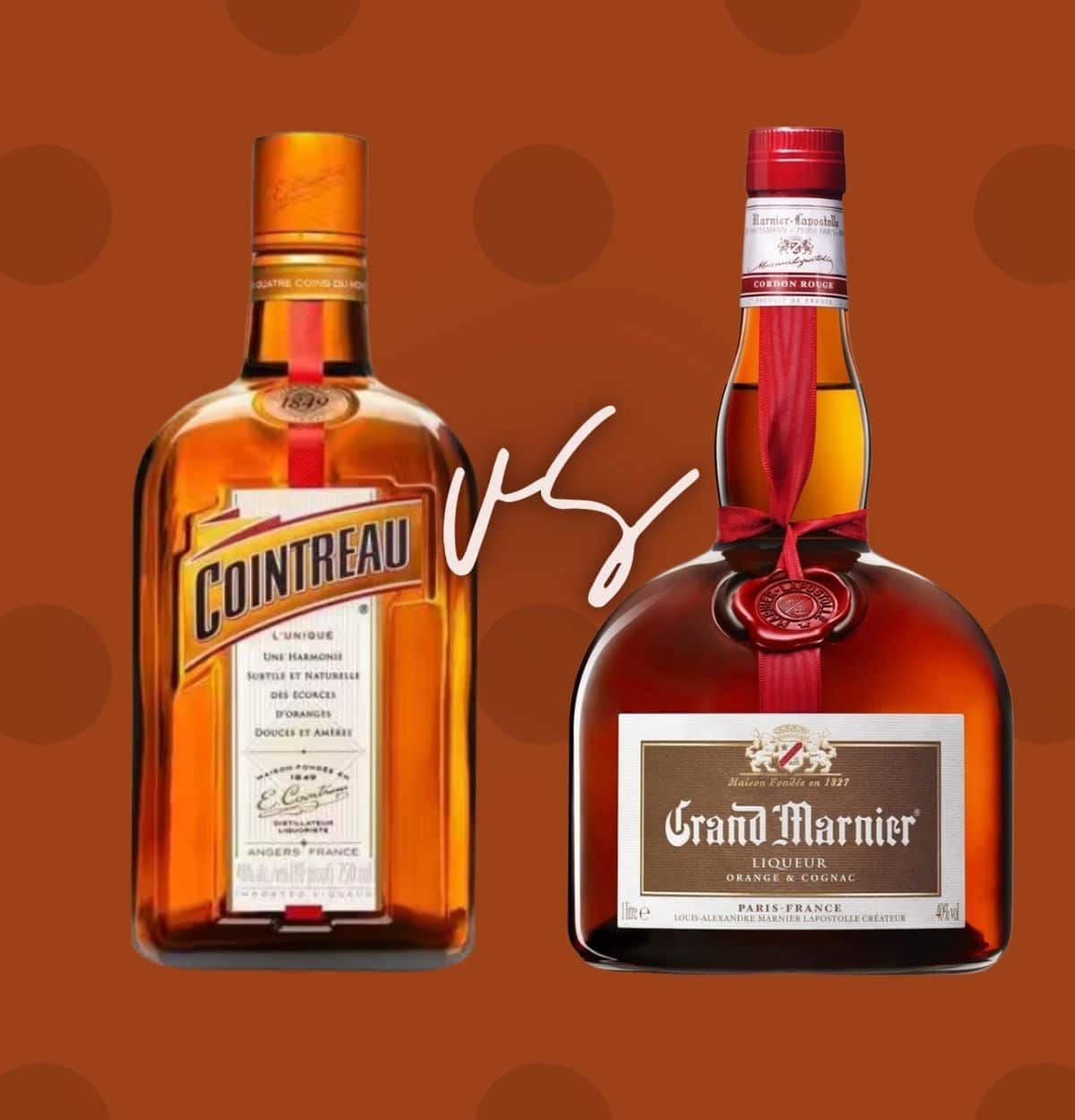 Cointreau and Grand Marnier are both orange liqueurs that appear in many cocktail recipes and are often used as substitutes for each other. But do they really taste so similar?

Cointreau vs Grand Marnier, both are orange liqueurs but still far from being the same. Still, many cocktail recipes work with both, and you can use them interchangeably.

Overview of Cointreau vs Grand Marnier

Before going a little further into the details, here are some facts that help you compare Grand Marnier and Cointreau.

Type: Cointreau is a dry orange liqueur of the Triple Sec type. The base alcohol is made from sugar beet.

Flavor: Cointreau is the perfect balance of bitter and sweet and has an intense, dry, and fresh orange taste.

You can read all about Cointreau here.

Type: Grand Marnier Cordon Rouge is an orange-flavored liqueur based on 51% Cognac. Some describe it as a hybrid of Cognac and Triple Sec. However, looking a little closer, it is actually more a type of Curaçao. Still, the unique base makes it hard to categorize.

Flavor: Grand Marnier combines the intense flavor of bitter orange with the full body of Cognac, and you can also detect notes of vanilla, toffee, and hazelnut.

Origin: Created by in Louis-Alexandre Marnier in 1880 Neauphle-le-Château, France

You can read all about Grand Marnier here.

Cointreau vs Grand Marnier - the similarities

Both liqueurs use the peels of pre-mature bitter oranges because their essential oils are responsible for the intense citric fragrance and taste.

Another thing Grand Marnier and Cointreau have in common is that they were invented around the same time: Both in the mid/late-1800s, Cointreau about five years earlier. And that's already it in terms of similarities.

Still, both products often come up in connection to Triple Sec - a type of orange liqueurs. However, this is only partly correct as Grand Marnier does not belong in that category.

Cointreau vs Grand Marnier - the differences

Initially, Grand Marnier was called Marnier Curaçao, which clearly shows that it is not a Triple Sec. While Cointreau, on the other hand, is a premium Triple Sec and had it written on the label of their bottle once.

The base of Cointreau is sugar beet like it usually is for Triple Sec, and it is a colorless liqueur.

In contrast, Grand Marnier is based on barrel-aged Cognac, and the resulting liqueur has a dark amber color. That also leads to a richer and more complex flavor profile compared to Cointreau.

Thus, Grand Marnier Cordon Rouge is perfect for sipping on the rocks as an aperitif, whereas Cointreau is better suited for mixed drinks. - Having said that, Grand Marnier is also an excellent cocktail ingredient.

The clean and fresh flavor of Cointreau makes it a versatile and popular cocktail ingredient.

A cocktail that traditionally calls for it is the classic Margarita. But also more modern riffs like the Mango Margarita or the Coconut Margarita require Cointreau to balance all the flavors.

And for a better overview, check out this list of our favorite Cointreau Cocktails.

A classic Grand Marnier cocktail would be the Moonwalk, created as an homage to Apollo 11. Besides the full-bodied orange liqueur, the drink contains orange flower water, sugar, and champagne.

Another famous drink asking for Grand Marnier Cordon Rouge is the Singapore Sling.

Also, you can often use Grand Marnier as somewhat of an upgrade in complexity in cocktails that call for Triple Sec.