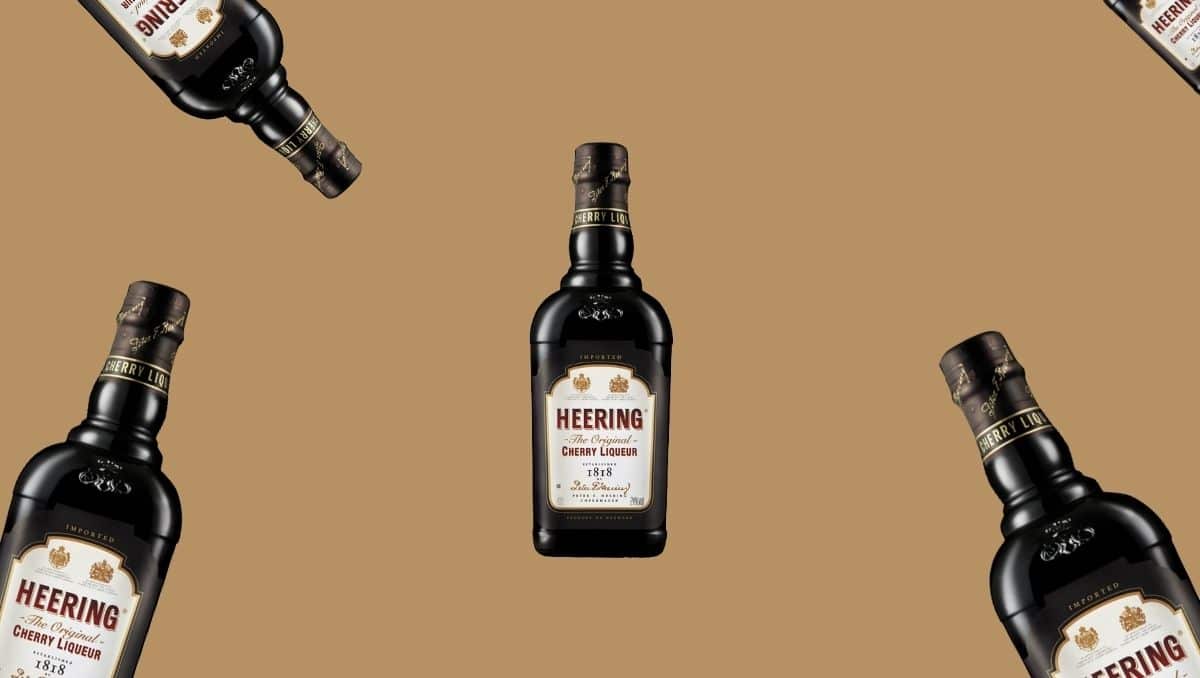 Heering Cherry Liqueur is the oldest and most popular cherry liqueur. And the product from Copenhagen, Denmark, is still made after the old family recipe.

Heering Cherry Liqueur often refers to itself as the original cherry liqueur. And being the first and most awarded of its kind, that claim seems justified. The old family recipe is all about maintaining that natural cherry flavor without an artificial aftertaste. And that makes it a favorite choice of bartenders when it comes to bringing cherry flavor into a cocktail.

In cocktail recipes, it's often called cherry Heering. That often leads to confusion about the term Heering. Heering is simply the brand and family name. But as the cherry liqueur ended up being the only product by Heering, the term is commonly used as a synonym for the cherry liqueur.

And even though Cherry Heering works brilliantly as a substitutional product for other cherry-flavored spirits, the resulting drinks will taste different. Let's have a closer look at what Heering cherry liqueur is and how to best use it in cocktails.

What is Heering cherry liqueur?

In 1818, the Heering family created their very first cherry liqueur in Copenhagen, Denmark. They used slightly crushed ripe cherries -without removing the pits- and a spice blend soaked in a neutral spirit. The resulting liquid had to age in oak casks for up to five years. During this time frame, the liqueur matured and added a level of complexity that's lacking in other products.

This complex flavor makes it an excellent replacement for cherry Brandy. And it's also the reason why the liqueur is not only the oldest but also the most awarded cherry liqueur. Also, bottled at 24% ABV (48 proof), Heering cherry liqueur is in the typical ABV range for this kind of liqueur.

In 2017, the brand was sold to Dutch spirits brand De Kuyper for an undisclosed sum. De Kuyper is a well-known company selling all kinds of liqueurs and cream liqueurs.

The taste of Cherry Heering

Heering cherry liqueur has an intense and natural cherry flavor comparable to stewed plum and cherry jam. Yet, it is more balanced due to the natural tartness. It's sweet and rich but without the artificial cough-syrup-like taste.

The aftertaste offers hints of almonds. That's mainly due to using whole crushed cherries, including the stones, during the soaking process. The cask-age maturation develops the flavor profile and leads to a complex and balanced cherry taste.

The main difference between Kirsch and Cherry Heering is that Kirsch is a clear, dry, and slightly bitter spirit usually bottled at 37% ABV (74 proof) to 43% ABV (86 proof). Cherry Heering, on the other hand, is significantly sweeter. It has a dark red color, is less alcoholic (24% ABV; 48 proof), and has a more pronounced cherry taste.

Kirsch is a short form for a German cherry Brandy variant. The full name for this product is Kirschwasser, which translates to cherry water. Both products are classified as Cherry Brandies. However, the term Brandy might be confusing as neither product is macerated in Brandy but neutral grain spirits like Vodka.

How to drink Heering cherry liqueur?

The liqueur rarely is consumed on its own. But the sweet and intense taste makes it perfect for mixed drinks of all kinds. If you want to drink it neat, serve it over ice and let it slightly dilute the liqueur. That helps to make the liqueur less aggressive and more enjoyable to sip.

A better way to enjoy it is as a Highball with the pairing of a mixer. Try it in a Heering Cola or a Heering Soda. In both versions, you should use one part of Heering cherry liqueur and two parts of the mixer. If you're a fan of Spritz cocktails, how about a Heering Spritz made with one part Heering, one part soda water, and two parts Prosecco Spumante. If you look for a fitting garnish, you can go with lemon wheels or peels and a (Stevens) cherry.

But cherry Heering is also part of some classic cocktail creations. The most famous ones are the Singapore Sling and the Blood & Sand.

What cherries are used for Heering cherry liqueur?

The liqueur is made of Stevens cherries. The dark and wild-growing cherries are native to Denmark and give the liqueur its distinct ruby-red color.

What is Cherry Heering used for?

Cherry Heering is used for baking and for making cocktails. It's an essential ingredient to the Singapore Sling and Blood & Sand cocktail.

Can you drink Cherry Heering straight?

Cherry Heering works best when served chilled over ice. The dilution makes the liqueur more pleasant to sip without watering down its taste.

Is Cherry Heering the same as maraschino liqueur?

Cherry Heering is not to be mixed up with Maraschino liqueur. Both are sweet liqueurs made of cherries but vary in taste and appearance. But despite these differences, both products are excellent substitutions for each other.

How many calories are in Heering Cherry Liqueur?