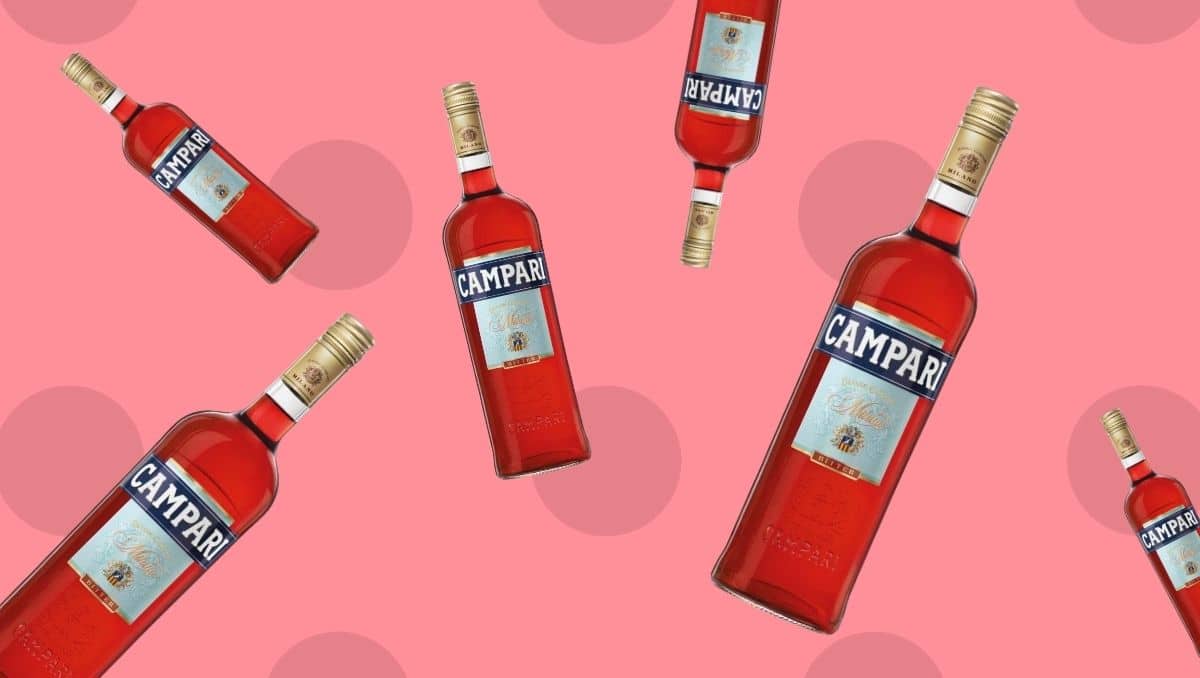 Campari - The bittersweet liqueur from Italy

Campari is a deep red and bitter liqueur made in Italy. The bitter spirit is made by infusing alcohol and water with various herbs and fruits.

Traditionally, Campari gets served as an aperitif. You drink it before a meal to stimulate the appetite and prepare the stomach. Today Campari is still regularly consumed before meals, but mainly as a component of cocktails and highballs.

With the rise of Italian aperitivo cocktails, the demand for Italian bitter liqueurs is growing, too.

Popular Amaro liqueurs like Aperol, Cynar, and, of course, Campari are vital ingredients for many of those cocktails. Think of the Negroni, Americano, or a classic Aperol Spritz cocktail. All of them are sold frequently in bars.

Read on to learn more about Campari, the famous Italian bitter liqueur.

Campari is a popular Italian liqueur. The dark and bright red color and its distinct bitter taste are the major standout characteristics. -And especially the brilliant red color was subject to many speculations.

Its ABV ranges from 20.5% to 28%, depending on the country in which it is sold. For instance, in most European countries it has 25%, in the US, Campari sells at 24%, and Argentina and Brasil are at the top of the range with 28% vol.

History of the iconic bitter liqueur

Gaspare Campari invented the iconic liqueur in 1860 in Novara, Italy, a city in the Piedmont region, just west of Milan.

The story behind the company

The first production plant was established about 44 years later in Sesto San Giovanni. Sesto, as it's often called, belongs to the Metropolitan region of Milan.

Since then, Campari and Milan belong together. And on today's bottles, you can still find a prominent mention of Milan on the upper part of the bottle label.

Gaspare Campari was responsible for the original recipe. But it wasn't until his son Davide took over that the company began to grow and export its product. Nowadays, the brand sells in more than 190 countries.

And it's no longer just Campari. In fact, Gruppo Campari owns around 45% of the global liquor market. They acquired Aperol and other famous Italian brands like Frangelico, Amaro Averna, and Cynar.

Were insects used to color Campari?

As I said before, Campari itself mostly gets recognized by its color and taste. Because both were so unusual, people started to wonder.

Eventually, they came up with the idea that Campari would use insects to color the liqueur. And, believe it or not, that turned out to be true.

The original version used carmine dye to create the iconic color. And carmine is made of crushed cochineal insects. However, in 2006 this stopped, and Campari began using artificial colors for the liqueur.

But people didn't only wonder about the iconic color. They also were curious about the intense bitter and herbal taste.

The exact ingredients are a well-kept secret, though. What we know is that Chinotto and Cascarilla are part of it. But let's have a closer look at the ingredients.

What is Campari made of?

The herbal bittersweet liqueur consists of many, many components. The exact list and number of ingredients are not known. But it's believed to be anywhere from 10 to 70. Quite a range, to be honest.

However, some I can name with a decent degree of certainty. These would be Chinotto, Cascarilla, gentian, orange, rhubarb, and also ginseng.

Chinotto is one of the essential ingredients. The orange-like small fruit has a strong bitter taste and is responsible for Campari's bitterness. In Italy, the small and bitter fruit is also commonly used in carbonated soft drinks.

Additionally, there's a number of dried herbs needed. But no one exactly knows what they are. Well, no one besides the factory director.

But whatever the recipe is, it's still the original version Gaspare Campari created in 1860. -Long live tradition.

The taste of Campari

If you try Campari for the first time, you most likely will not be positively surprised. It offers quite a complex and unique flavor profile you probably need to get used to before you can really enjoy it.

On the first sip, you notice the intensely sweet and bitter notes. Only once you overcome the initial boost of bitterness can you taste the herbal and fruity notes of the liqueur.

It's hard to describe and definitely impossible to compare with other liqueurs.

It's an acquired taste, for sure, but once you get used to it, you'll find many subtle aromas like orange peel, arugula, various herbs, and also hints of cinnamon.

Cocktail recipes rarely ask for a specific brand of alcohol. But as Campari is so unique, it is hard to substitute it without changing the dynamic of the drink.

And there are plenty of classic cocktails based on the bittersweet Italian liqueur, even in the standardized IBA list for cocktail recipes.

Besides the Negroni -the probably most iconic drink based on Campari- there are, for instance, the Americano, Boulevardier, Negroni Sbagliato, and the Milano-Torino.

But also outside the IBA listed drinks, many classics ask for Campari as an ingredient, like the Garibaldi, Jungle Bird, and Campari Spritz, to name just a few.