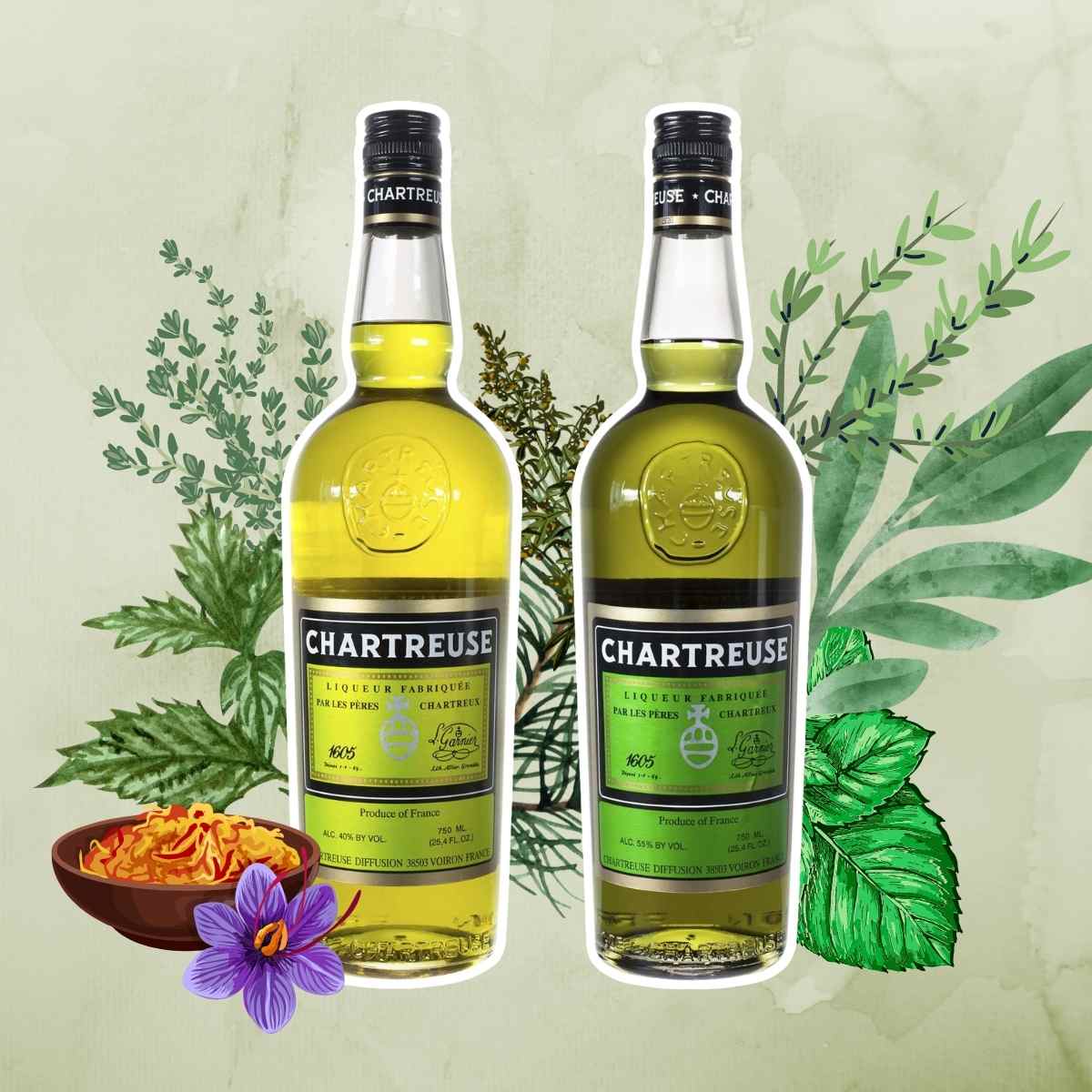 All You Need to Know About Chartreuse Liqueur

Green Chartreuse is probably the most popular green liqueur in the world. An elixir with an extraordinary taste originating from a secret hand-select blend of 130 herbs and medicinal plants.

Chartreuse is a liqueur from France, owned by the "Ordre des Chartreux" - the Carthusian order of monks.

The liqueur got its name from the monks' Grandé Chartreuse monastery, located in the Chartreuse mountains of France in Grenoble. Until today, Green Chartreuse is produced just around the corner in their distillery of Aiguenoire, which is close to Grenoble.

Its characteristic green color even made it into the world of color codes:

Since 1884, Chartreuse has been standing for the distinct green-yellow color the liqueur shows when poured into a glass. An interesting side-fact that even made it into one of Quentin Tarantino's movies ("Death Proof"). [1]

Chartreuse is a French herbal liqueur based on wine first produced in 1737 by Carthusian monks. It is available as a green and yellow expression. Green and Yellow Chartreuse are not only different in color but also vary in taste and alcohol content.

Green Chartreuse is by far the more common of the two versions. It's an ingredient that one can find in various cocktail recipes as it increases complexity and brings a light sweetness.

The secret formula supposedly includes as many as 130 herbs, plants, flowers, and spices. -No wonder it is full of flavor and brings complexity to a drink.

The color of Green Chartreuse is achieved naturally through the second maceration of plants, and it has an alcohol content of 55% vol.

The Difference Between Green and Yellow Chartreuse

Green Chartreuse is made with 130 different herbs, plants, and flowers and is considered the stronger of the two liqueurs as it contains 55% ABV.

Yellow Chartreuse is made with fewer herbs and is slightly sweeter and smoother in flavor than the green variety. It is also lower in alcohol and contains only 40% vol.

Where exactly is Chartreuse produced?

The Carthusian herbal liqueur is produced in the French Alps. The distillery and the cellar, where the herbal liqueur ages, are located in the small town of Voiron, about 25km North-East of Grenoble.

How it is made

The recipe for the liqueur is a closely guarded secret, known only to a select few members of the Carthusian order of monks, who have been producing the liqueur at the Chartreuse monastery in France since the 17th century.

Today, the only two persons who know exactly how to make green Chartreuse are Dom Benoit and Frère Jean-Jacques. [2]

Some herbs known to be part of the recipe include angelica, arnica, balm, cinnamon, costmary, genepi (a type of wormwood), hyssop, juniper berries, lemon balm, peppermint, and thyme.

The list of ingredients for the yellow version is apparently relatively similar to the green one. Only some additional components, like cardamom seeds, are said to make the difference.

A high-proof alcohol base extracts the flavors and aromas from the herbal ingredients. Green Chartreuse uses a spirit made from beets. Yellow Chartreuse is made with a grape spirit instead.

In both cases, the finished product is then aged in oak barrels to develop its unique flavor and color.

How does Chartreuse taste?

Initially intended to be a medical tonic, Green Chartreuse has a very intense and characteristic taste. It's comparable to other herbal liqueurs like Galliano liqueur, Liquore Strega (both from Italy), and German Kräuterlikör. The most significant difference between those is that Green Chartreuse tastes way more vegetal.

The scent of the French herbal liqueur is fantastic, no matter if it's the green or yellow expression. You can smell various aromas like rosemary, angelica, sage, pine, tonka bean, cocoa, mint, pepper, and hints of fruit.

Green Chartreuse tastes bitter, strongly herbal, and at the same time sweet. Despite the intense herbal flavor, the liqueur is well-defined by a mentholated freshness.

Yellow Chartreuse, on the other hand, is sweeter and softer in taste with flavors of honey, saffron, and anise.

The History of Chartreuse

The Carthusian order of monks, founded in 1084, is accountable for inventing the herbal liqueur.

In 1605 Monsieur Hannibal d'Estrées supposedly started the long story of the Green Chartreuse. That year, he presented the recipe for an "elixir for long life" to a group of Carthusian monks.

The formula for this health potion -which it was at that time- was complicated. In fact, it was so complex that it took the order more than a century to master the production.

It contained 130 different herbs, plants, flowers, and other ingredients. All brought together with an alcoholic wine base.

The recipe the order initially used was only partly correct. Eventually, Brother Gérome Maubec took matters into his hands, trying to solve the riddle of the recipe.

However, he could not fully unravel the formula before his death in 1737. So he passed all his knowledge to Brother Antoine. And it was Antoine who completed the recipe and began creating the first batches about 20 years later.

The name of the creation still sticks today: The Herbal Elixir of the Grandé Chartreuse.

The original version contained 71% ABV (142proof). That got later replaced by a milder version at 55%, nowadays known as Green Chartreuse.

No, both versions get their color from natural ingredients. The green color is derived from chlorophyll contained in herbs and plants. Yellow Chartreuse does get its color from saffron.

You can enjoy Chartreuse liqueur in many ways. It is often served neat or on the rocks, meaning at room temperature or over ice respectively.

If you want to sip it on its own, it's best to serve the liqueur well-chilled. That further pronounces the flavors of the herbs and plants used to make it.

It can also be incorporated into cocktails or mixed with tonic water or soda water to make a refreshing long drink. Some also use it for cooking to add a unique herbal flavor to dishes.

Green Chartreuse, with its beautiful light, jade-green color, is an excellent digestif. You should drink it chilled, so the myriad of flavors can expand but don't overpower the palate.

As mentioned above, the taste is quite powerful and complex. Consumed at room temperature it can be a bit overwhelming to some. However, once you add this herbal elixir to cocktails, it becomes less intense yet still shines.

Two perfect examples of this are the Last Word and the Bijou cocktail. The first is a classic made with Gin, maraschino liqueur, lime juice, and Green Chartreuse. The Bijou combines the green herbal liqueur with Gin, Sweet Vermouth, and orange bitters.

Different Styles of the Carthusian Liqueur

Based on the traditional Green Chartreuse, other types of Chartreuse evolved with time. But the recipes and the differences between them for the different Chartreuse versions are all kept secret.

It began in 1840 when the sweet Yellow Chartreuse came up. Only relatively recently, in 2007, a special edition was released with the name Cuvée des Meilleurs Ouvriers de France. It was a collaboration between the Chartreuse distillery and various Sommeliers.

The result was a Chartreuse of yellow color at 45% ABV. As this was a one-time thing, I didn't include it in the list below.

Let's start with the obvious. As described, the bestselling Green Chartreuse is made from a whopping 130 herbs and plants, is of natural green color, and clocks in at 55% vol.

Yellow Chartreuse is a lighter and sweeter version. Besides the milder aroma, the yellow color and the lower alcohol content of 40% are the key differences from the traditional version.

In other words, this Chartreuse ages for a very long time, creating Chartreuse of excellent quality. You can get this amazing Chartreuse in both green and yellow.

That one is actually the traditional version of Chartreuse. Made of the same 130 ingredients as the Green Chartreuse, it contains 69% alcohol.

It is comparable to the traditional recipe that resulted in a 71% ABV liqueur. Élixir Végétal de la Grande-Chartreuse is available only in small bottles of 10cl, packed in wooden boxes.

3 comments on “All You Need to Know About Chartreuse Liqueur”