When the leaves turn brown and the days get shorter, it is just the right time for this beautiful autumn-inspired Apple Cider Mimosa.

The Apple Cider Mimosa is one of our favorite fall cocktails. It's bubbly, fruity, crisp, slightly sweet, and, like other Mimosa cocktails, easy to make.

The sparkly apple flavor works for a brunch in October or a cozy afternoon just as well as a themed, festive aperitif for the upcoming Thanksgiving dinner.

Ingredients of the Apple Cider Mimosa

The Apple Cider Mimosa is a classic two-component drink and calls for sparkling wine and apple cider. Yet, some like to upgrade it with a splash of Triple Sec and a cinnamon sugar rim.

While I support the idea of Cointreau in my Apple Cider Mimosa, I'm not a fan of the cinnamon sugar rim. But let's talk about the basics first.

The selection of sparkling wines is ever-growing, and you've got a wide range to choose from. What once was a simple and straightforward decision can now become quite a headache to some. -Especially if you don't usually drink sparkling wine.

For this Apple Cider Mimosa, you don't want a bubbly that is too sweet. Whether you choose Prosecco, Cava, Sekt, or Champagne, pick something labeled at least Extra Dry or Brut.

Don't let yourself be misguided to opt for a sparkling wine that says only dry on the label. By today's standards, it's still quite sweet and only is called dry for historical reasons.

This Apple Cider Mimosa calls for apple cider like you usually get it in the US. It's a non-alcoholic, unfiltered, unsweetened apple juice.

Outside the US, you may know it as apple juice. There, cider refers to an alcoholic beverage made from apples. That, in turn, is known in the US as hard cider.

So, to sum it up: If you're from the US and Canada, you need apple cider for this recipe. If you're not from North America, shop for cloudy apple juice.

Incorporating Triple Sec into your Apple Cider Mimosa is purely optional. It adds some extra depth of flavor and brings in a beautiful orange aroma that fits the fall theme nicely.

The dry and slightly bitter orange liqueur also balances the sweetness of the apple cider and slightly increases the overall ABV.

My favorite choice for cocktails is Cointreau. And if you're unsure what to do without apart from mixing Apple Cider Mimosas, here's a list of our favorite Cointreau cocktails.

Cinnamon Sugar Rim - yes or no?

I agree that a rimmed glass looks nice, but since you don't serve Mimosas with a straw, it's impossible to avoid getting lumpy bits in your drink when sipping it. Plus, I find it too sweet.

Still, if you want to rim your glass, mix a bit of caster sugar with cinnamon powder and put the mix on a saucer.

Then, moisten the rim of your glass with a bit of apple cider and dip it into the sugar-cinnamon mix before prepping your drinks.

If you search for more autumn-themed drinks, try the Maple Old Fashioned. It's a beautiful seasonal twist on one of the most classic cocktail recipes out there.

Or you can try the Milk Punch, a popular drink in the Southern states of the US for cold days. It's a blend of Rum, whole milk, syrup, and spices.

For a more comprehensive list of our autumn favorites, check out our list of the best fall cocktails. 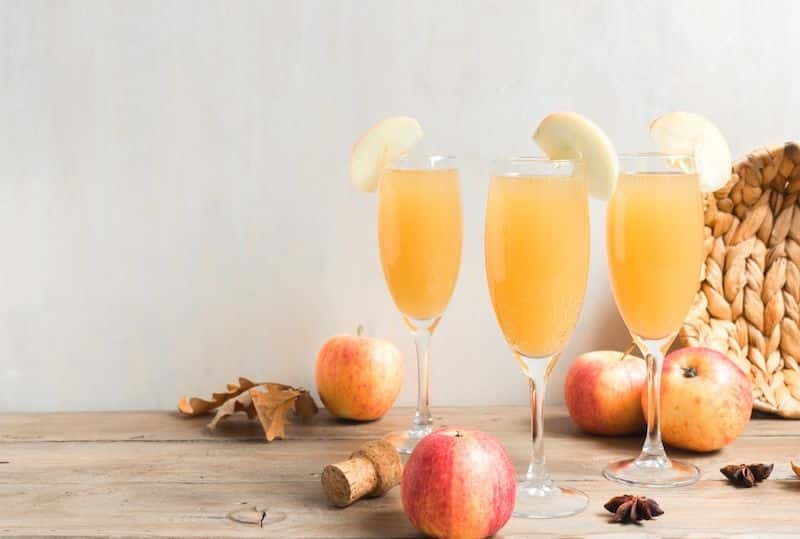