A Baby Guinness is a fun and clever shooter that looks like a miniature version of a Guinness stout. So if the traditional Irish beer isn't your thing, opt for this tasty shot next time.

When first looking at the Baby Guinness Shot, one could think it actually contains the classic dark stout from the world-renowned Irish brewery.

But apart from its looks, it has nothing in common with the iconic beer from Dublin. Instead, the shooter includes coffee liqueur and a float of Irish Cream liqueur.

And this combination doesn't only look and sound amazing. The shot is actually pretty damn good. -At least if you have a bit of a sweet tooth. If you don't, then stick to the stout. So let ready to mix some tiny Guinness pints.

What is a Baby Guinness cocktail?

A Baby Guinness is a shot that resembles the look of a regular pint of Guinness but in a miniature version. It's made of only two ingredients - coffee-flavored liqueur that imitates the dark stout beer and Irish Cream -the replacement for the foamy top.

It's a great after-dinner drink but also fun as a party shooter. Due to its Irish heritage, it's often part of St.Patrick's Day celebrations, like the Green Tea Shot is, too.

What you need to make this shot

As described before, all you only need for a Baby Guinness is a tasty coffee liqueur for the lower part of the drink and Irish Cream for the top.

The latter is a popular liqueur based on Irish Whiskey, cream, and additional flavorings. It usually contains 15-20% Alcohol By Volume (ABV) and was first produced in Dublin, Ireland, in 1973.

The most famous representative is Baileys, and this works perfectly in our Baby Guinness Shot. Besides the outstanding taste and creaminess, it's also not too sweet. You can still taste the Whiskey, which sometimes gets lost in Irish Cream products.

The coffee liqueur part in this drink mimics the iconic dark color of stout beer. In recent years, more and more coffee liqueurs have entered the market, and the sweetness and caffeine levels can vary widely.

The worldwide bestseller is Kahlúa. So it's no surprise that it is a popular choice in this shot recipe. But the Mexican liqueur made from arabica beans is closely followed by another classic, Tia Maria from Jamaica.

For making a Baby Guinness Shot, Tia Maria is my preferred choice. It tastes less sweet, is better balanced, and overall smoother than Kahlúa.

Need more caffeine? A shot of Kahlúa (1.5 oz) contains 4.5 milligrams of caffeine, and an ordinary cup of coffee has around 100 milligrams. So if you need caffeine in your shots, try to make it with either Mr. Black or CO'PS coffee liqueurs. These two products don't only taste like coffee but also wake you up like your favorite roast.

Mr.Black is a cold brew liqueur holding ten times more caffeine than Kahlúa. CO'PS is espresso-based and contains even more caffeine. - Sadly, it is not available in the US currently, though.

The alcohol content of a Baby Guinness shot depends on the ingredients and ratios used. A typical version of this drink, made with three parts Tia Maria and one part Baileys, contains 19,25% ABV.

If you decide to make the shot with the exact same measurements using CO'PS and Baileys, the same shot would have 26,75% ABV.

How to Make a Baby Guinness - Step-by-Step

To make a perfect Baby Guinness, you need to float the Irish Cream on top of the coffee liqueur.

The best way to float the Irish Cream on top is by grabbing a bar spoon to help layer the creamy part on top.

Measure the Irish Cream with your jigger and hold the bar spoon close to the shot glass filled three-quarters with coffee liqueur.

Now slowly and carefully, pour the Irish Cream via the spoon on top of the coffee liqueur. Due to the different densities of the two liquids, they won't

So now, grab your favorite coffee liqueur and a bottle of Baileys - or one of the more affordable alternatives - and mix some Baby Guinness shots. 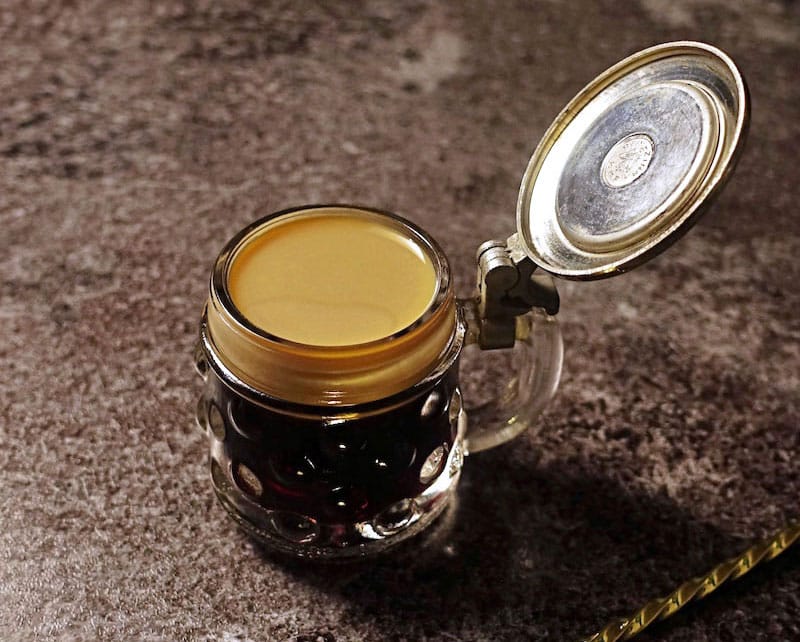