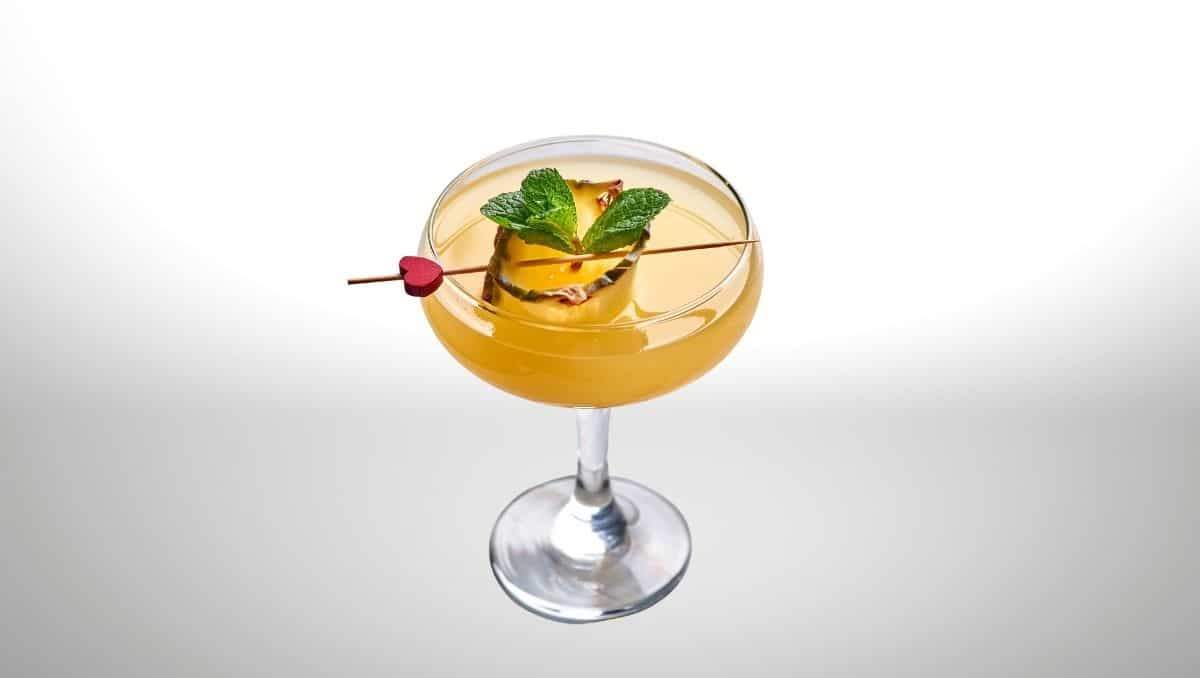 The Barracuda cocktail is a bright yellow Rum cocktail. Its origin lies in Italy, where barkeeper Benito Cuppari created the recipe while working on a cruise ship.

Its warm aroma of Rum and the addition of herbal notes from Galliano work beautifully with the tropical pineapple and lime juice.

The cocktail exudes a hint of Tiki culture and is also classified as such. However, actually, the Barracuda is closer related to a classic Rum Sour.

And when talking about similarities to other cocktails, I have to mention the role of Galliano:

Same as with the Yellow Bird cocktail, the success of the Barracuda goes back to an offensive and very clever marketing campaign by Galliano liqueur. But I will get back to that a little further down.

Ingredients to make a Barracuda

Yet, honestly, there are plenty of options. You might as well use your favorite one or the one sitting on your home bar shelf. As long as it's of decent quality and not flavored in any way, it works for the Barracuda.

Then obviously, there is the Galliano liqueur. It has quite a distinct taste, and, considering it is one of the essential ingredients for making the Barracuda, you should refrain from replacing it.

As for the juices, you should opt for fresh pineapple juice and fresh or aged lime juice.

Now to the sparkling part. I know that many recipes use Champagne or any other sparkling wine. But Benito Cuppari used Prosecco for making his cocktail, and I recommend doing the same.

Also, keep in mind to look for a Prosecco spumante (not frizzante) if you want proper sparkling. The frizzante version is semi-sparkling and falls flat too fast when mixed into a cocktail.

History of the Barracuda cocktail

The roots of the cocktail lie in the open sea. Back in the 1950s, Benito Cuppari invented the drink while working as a barkeeper on the Cristoforo Colombo cruise liner.

A few years later, in 1965, he perfected the recipe for the cocktail, soon after starting to work on another ship - the SS Michelangelo.

Cuppari also took the refined recipe as an opportunity to rename the cocktail into Barracuda. -As it happens, that was also the name of one of the most famous beach clubs in the 50s and 60s run by a close friend of Cuppari, which probably played a role in his choosing the new name.

The Barracuda cocktail was a huge success. Already the first version had been selling well, but the refined version smashed it.

It won a cocktail competition in St. Vincent and within no time brought the Italian liqueur brand Galliano into the game.

As with the Yellow Bird, Galliano sensed a winner and started getting involved in the marketing of the Barracuda cocktail.

One of the best moves by Galliano was the glass -or mug- the Barracuda got served in.

Originally the cocktail came in a genuine, natural pineapple shell, but Galliano replaced it with a branded ceramic mug. The drink soon became the signature cocktail of the cruise ship.

And as you can imagine, the ceramic pineapple mug was a popular souvenir amongst guests.