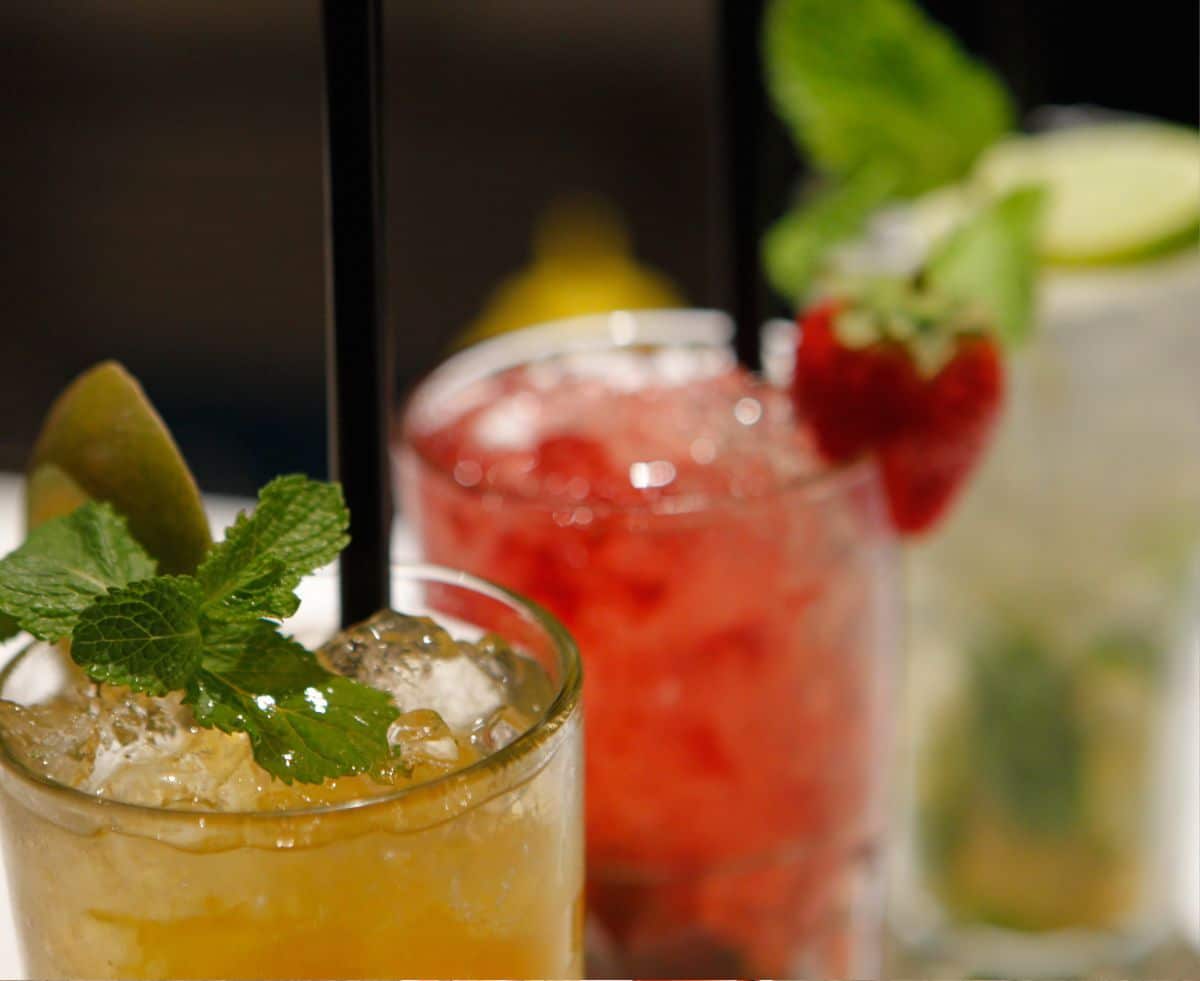 From classics like the Mojito and the Daiquiri to Tiki Drinks like the Dark & Stormy and the Cobra's Fang, here's a list of the best recipes for Rum Cocktails.

The history of Rum and also of Rum Cocktails started in the Caribbean. As far as researchers can tell today, the first time Rum as we know it now was produced in Barbados in the mid-1600s.

A decade later, sailors from the British Royal Navy sailing the Caribbean mixed the first Tiki cocktail with the sugarcane-based spirit: The Navy Grog. -Admittedly, out of necessity and not for amusement, but still.

Since then, a lot has changed, and mixing drinks has turned into a beautiful craft. So, here's the list of today's best Rum Cocktails to make at home.

Also, if you want to get an overview of all our recipes for cocktails containing Rum, continue here:

Rum Drinks with a long tradition, a classic flavour profile, or both, some of which laid the ground for many other cocktail creations.

The Mojito is one of the most famous and most ordered Rum Cocktails of the present. The recipe includes White Rum, lime juice, cane sugar, and mint, and the result is a real crowd pleaser.

Just as tasty as the Mojito, the Rum Sour is made with a base of dark Rum, lime juice, sugar syrup, and a frothy egg white top. -Don't forget you have to dry-shake for the perfect foam.

The Daiquiri Cocktail is one of many cocktails invented in Cuba, named after a small coastal village on the island. An American engineer created the drink made with White Rum, lime juice, syrup, and Angostura bitters.

The Mary Pickford is named after a famous Canadian actress and producer. The recipe requires fresh pineapple juice, Maraschino liqueur, and a teaspoon of grenadine responsible for the pink color.

The Cuba Libre is a blend of Coca-Cola, Rum, and limes. It was created around the time the Americans freed the Caribbean island from the Spanish. The situation turned sour quickly, but the drink became an evergreen.

For a long time, the Canchanchara was unknown outside of Cuba. Now the cocktail from the small town of Trinidad even made it onto the official IBA list. The recipe calls for Aguardiente, honey, lime, and a clay pot to serve it in.

The Between the Sheets is a cocktail invented by bar legend Harry MacElhone in Paris. It consists of a split base -half white Rum, half Cognac-, Triple Sec, and fresh lemon juice.

Despite its name, the origin of this drink is not in Cuba but in New York. Famous bartender Audrey Sanders invented it in 2001. The recipe for this "new era classic" asks for aged Rum, Champagne, simple syrup, lime juice, and fresh mint.

This Rum Cocktail goes back to a Half Moon Resort in Jamaica but was brought to international attention by Galliano. It has a long list of ingredients, including different types of Rum, juices, Galliano, and banana liqueur.

Delicious and world-famous Cocktails based on Rum mixed with other exotic, fruity, and tropical ingredients.

The Mai Tai is one of the most influential drinks in the Tiki cocktail culture. If you do it right and use quality ingredients, this blend of Rum, Curaçao, lime, and orgeat tastes fantastic.

Like most famous Tiki drinks, the Piña Colada does not enjoy the best reputation because it's often made cheaply with low-quality or even wrong ingredients. However, actually, the coconut-pineapple cocktail is a true delight.

The lower, white part of this layered Rum Cocktail consists of ginger beer, lime juice, and rich simple syrup. The stormy top is a float of Gosling's Black Seal Rum and a few drops of Angostura bitters.

The Cobra's Fang has a long list of tropical, sweet ingredients and a quirky name, both characteristic of Tiki cocktail culture. It's a fun drink balanced by Absinthe and a dash of bitters.

A refined version of the mix of Rum, lime, sugar, and water that the British Royal Navy brought to life to get through the rough days at sea without getting completely wasted.

The Painkiller Cocktail basically is a fruity version of the Piña Colada. In addition to Rum, pineapple juice, and cream of coconut, this recipe calls for 0.75 oz of fresh orange juice.

The slight sweetness of Rum, and especially the rich and full-bodied flavor profile of aged Rum, make it a fantastic base for festive drinks.

The Milk Punch is a traditional and warming winter drink that combines Rum with Whiskey, whole milk, sugar, and spices like cinnamon and nutmeg.

A festive version of one of the most classic and popular Rum Cocktails. The Cranberry Mojito is made with cranberry syrup and fresh cranberries.

Here are some more tasty Rum Cocktails to try and make at home.

The Ti' Punch is made with Rhum Agricole, a subtype of Rum made from fermented sugar cane juice. This cocktail is a great way to introduce people to the bright, more earthy, and vegetal spirit.

The Dirty Banana is a rich and creamy drink with an intense banana flavor. It's somewhat of a delicious spiked milkshake. To make it, you need a ripe banana, banana liqueur, dark Rum, coffee liqueur, and cream.

The Queens Park Swizzle makes use of the classic combination of Rum, lime, sugar, and mint but turns it into something new through the distinct preparation method.