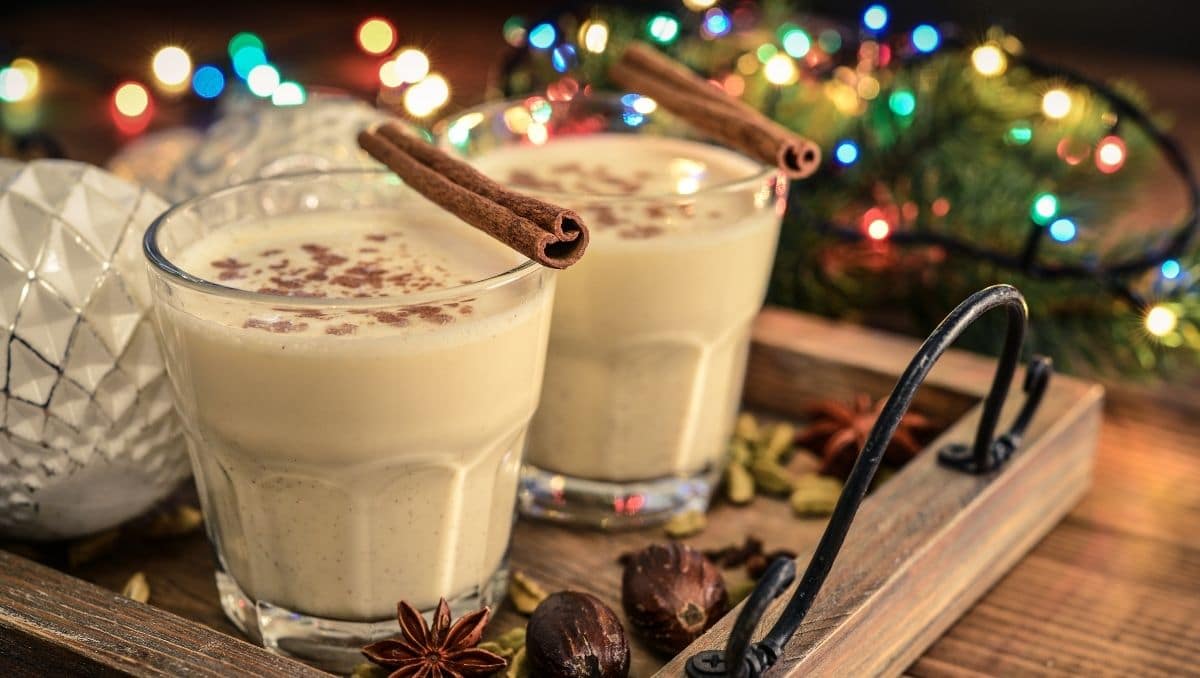 Bourbon Eggnog is a delicate holiday cocktail. It's easy to make, and its rich and spicy taste makes it a perfect drink during the cold winter days.

Eggnog is a popular drink to serve during winter times. Especially during the festive season, there are hardly better choices asides from mulled wine variations like Glögg. And there are many different ways to spike your eggnog. In Kentucky, though, there seems to be only one appropriate alcoholic ingredient to add to your Eggnog: Bourbon. And Bourbon Eggnog is a delightful thing.

The sweetness in Bourbon, together with the taste of corn and notes of baking spices, make it a fantastic addition for eggnog. And even if you don't like Bourbon straight, combined with eggnog it's a match made in heaven. And the best thing about it: making Bourbon Eggnog at home couldn't be any easier. Read on and find out how to make the perfect Bourbon Eggnog.

Originally, eggnog comes from Britain. Most likely, eggnog, as we know it today, is derived from a drink they called posset. That is a warm, spiced drink made of milk, ale, and spices. Later the recipe for posset changed to a mix of egg, milk, and Sherry.

The origin of the name eggnog is a bit of a mystery. The two most common claims are that, either, the terms "nog" - describing a strong beer or ale - or "noggin" - the name for a small wooden cup- are responsible.

In the 18th century, eggnog came to America. At that time, people usually spiked it with Sherry, Madeira wine, or Brandy. All those ingredients were quite expensive in the US, so they used Rum or Bourbon instead. If you want to know more on this topic, read this article about traditional eggnog.

How to make Bourbon Eggnog

In this recipe, we do not heat the mix. Heating -or rather "tempering"- eggnog makes it last longer and prevents possible salmonella situations. But we will use pasteurized eggs instead. They are treated to reduce the risk of food-borne illness in dishes.

We start with the ingredients. We will need pasteurized eggs, heavy cream, half and half, sugar, Amaretto liqueur, Bourbon, vanilla, and nutmeg. These components will make for beautiful eggnog.

Start by beating the egg yolks and successively add sugar, nutmeg, and vanilla. Always ensure that everything is combined well. The consistency should be similar to a thick cake batter. And don't worry, things will get a lot more fluid shortly.

The next part is about our spirits base. This recipe is based on Bourbon. But it also uses Amaretto liqueur to sweeten and spike the eggnog. For this, you should use 100 proof Bourbon or similar. That makes for enough kick to our eggnog. You need 1.5 cups of Bourbon and another 0.25 cup of Amaretto.

Slowly add the spirits to the mix and keep stirring. If you add them little by little, all components will blend properly. Once everything is combined, store it in a jar and let it sit in the fridge for about a week. That's necessary for the mix to cure and develop its typical fragrant taste.

Take the almost-done eggnog out of the jar and put the mixture into a large bowl. First, add whipped heavy cream. Make sure to beat the cream until it has a nice and firm consistency. Combine the whipped heavy cream and the Bourbon-Amaretto-egg mixture by carefully folding the cream into the mix. Next, add the half and half and fold again until the all is combined.

Taste your eggnog before bottling. Probably, you might want to add a bit of extra Bourbon, but, of course, that depends on your tastebuds. Alternatively, you can also bottle and store it as it is and add spirits or some extra spices when serving.

Besides Bourbon Eggnog, we have plenty of other drinks and cocktails perfect for the festive season. If you're into Rum or mulled wine, give our Christmas Spiced Rum Sour a try. Besides aged Rum, it contains a mulled-wine-based syrup that brings gorgeous Christmas spices into the drink.

For Margarita lovers, the White Christmas Margarita Punch is a perfect drink. Or, if you're more into refreshing cocktails, try the Cranberry Mojito. That is a festive twist on the classic Cuban Mojito made with cranberry syrup and fresh cranberries.

Can I add Bourbon to eggnog?

Traditionally eggnog is made with Brandy, Sherry, or Madeira wine. But, nowadays, Bourbon, Rum, or Rye Whiskey are more common.

What kind of Bourbon do you put in eggnog?

It's best to use 100 proof Bourbon (50% ABV) for your Bourbon Eggnog. Alternatively, you can use Rye, Rum, or Brandy to spike your eggnog.

How much Bourbon should you put in eggnog?

Per 1 liter eggnog, use around 0.75 cups of Bourbon. Depending on your tastebuds, you can, of course, use slightly more or less.

What Bourbon is best with eggnog?

You can use any Bourbon, but if you're looking for a recommendation, Four Roses Single Barrel Bourbon and Woodford Reserve Bourbon.