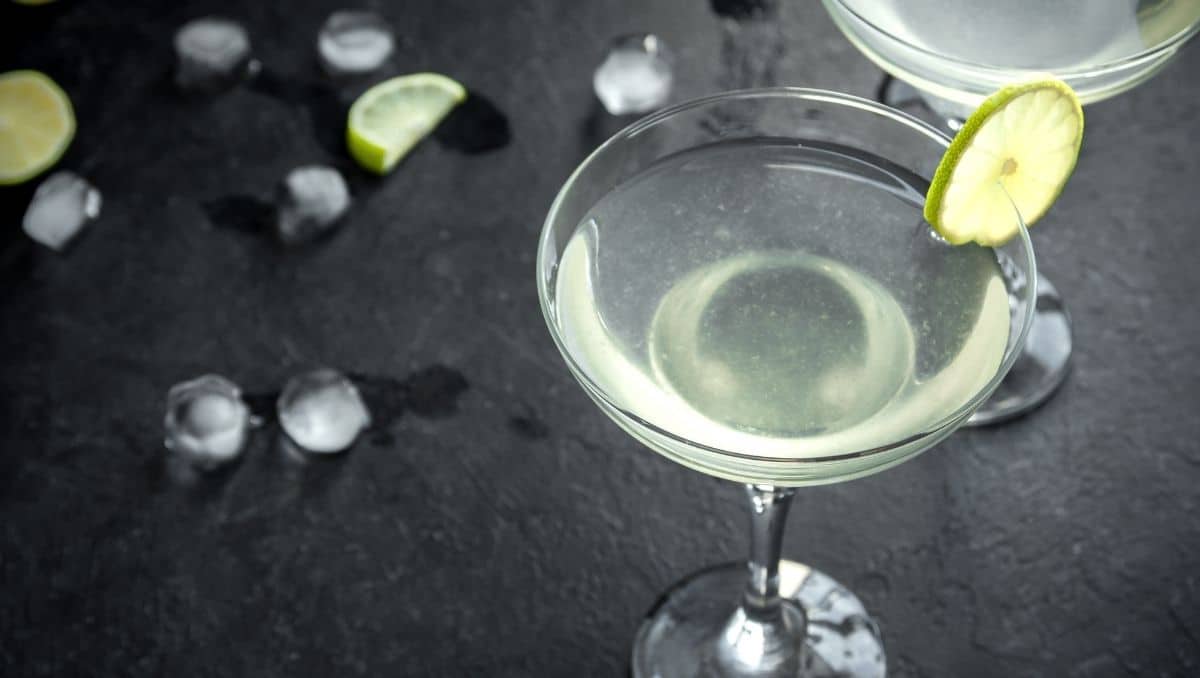 The classic Gin Gimlet cocktail is a mix of lime, Gin, and syrup. It's one of those easy-to-make sips that needs only three basic elements. So you don't need to spend a fortune on ingredients.

The only elements of the traditional Gin Gimlet recipe were Gin and lime cordial.

But as the art of making cocktails evolved, fresh ingredients are preferred over store-bought cordials.

In the case of the Gin Gimlet recipe, that meant replacing lime cordial with freshly squeezed lime juice paired with simple syrup.

But that's not where modern mixology stops. There are many Gimlet variations on the classic recipe, and I want to introduce some of the most important ones.

The Birth of the Gin Gimlet

The Gimlet reached its peak of popularity in the 1980s. But this simple and delicious Gin cocktail was invented long before.

The first appearance dates back to the 1860s. Again, as with many other cocktails, the British Royal Navy was loosely involved in the birth of its recipe.

For medical purposes, they mixed spirits with lime juice to prevent scurvy - A disease caused by a lack of vitamin C. To extend the lifetime of ordinary lime juice, they mixed it with Rum.

Initially, that was the other way around - they added lime to Rum to dilute it and mask the low quality of the spirit.

But over time, the health benefits of vitamin C became clear. -You can read more about this in the history of the Navy Grog.

But back to the Gimlet: A Mr. Lauchlin Rose invented another method to keep lime juice "fresh: By mixing lime juice with sugar, Rose created the very first lime cordial. A key ingredient of every classic Gin Gimlet cocktail.

So they continued to mix it with spirits, in many cases with Gin, unaware that this would become a classic cocktail recipe.

Ultimately, the actual cocktail first was mentioned in a cocktail book from 1923. When Harry MacElhone, a mixology legend, introduced the Gin Gimlet recipe in his book "Harry's ABC of Mixing Cocktails."

So initially, the Gin Gimlet cocktail is made with Gin and Rose's lime cordial. The problem with this traditional recipe is that it's way too sweet for many.

Harry MacElhone asks in his recipe for a mix of one part Gin to one part lime cordial. After stirring with or without ice, his drink was ready to be served. That would turn out very sugary, as you can imagine.

To make it less sweet, I suggest tweaking the classic Gimlet recipe a bit. You can keep the ingredients classic, but change proportions and shake it with plenty of ice to properly chill it.

A mix of 2 parts Gin to 1 part lime juice should be sweet enough and, in my opinion, make a far better Gimlet.

However, in modern mixology, lime cordial gets used extremely rarely. Even with Rose's lime cordial -the original base for the cocktail and widely available in the UK- it doesn't produce the desired tangy and acidic lime taste.

You will only get that with freshly squeezed limes. And this perception literally screams for a modern take on the original recipe.

To mix up a Gin Gimlet in a modern way, you also don't need many ingredients. Gin, limes, and simple syrup are enough.

If you're a fan of boozy cocktails, start with a mix of 2 oz of Gin, 0.5 oz of freshly squeezed lime juice, and 0.5 oz of simple syrup.

This recipe is well-balanced but definitely on the more potent side. If it's too strong for you, increase the amount of lime juice and simple syrup to 1 oz each.

Either way, shake up your cocktail in a cocktail shaker with plenty of ice. You want your drink properly chilled to enjoy it at its best.

Also, for lime juice, there are different possibilities. You could consider aging it to take the acidic edge off. If you want to read more about this, head to the article about lime juice and its use in cocktails.

The traditional choice would be Plymouth Gin, and that really works well. If you're looking for a more affordable version, you can go with Beefeater Gin. -Read here why Beefeater is better in cocktails than Tanqueray Gin.

If you want to experiment, you can use all kinds of Gin, of course. The simple recipe of the Gin Gimlet gives a lot of room for the various types of Gin that are out there.

As already mentioned, there are many variations of the classic Gin Gimlet, ranging from the Vodka Gimlet to a Cucumber Gimlet or the Cucumber and Basil Gimlet.

And what all of these variations have in common is that they're pretty easy to make. So let's have a look at these Gimlet variations.

If you're a fan of Vodka -or simply not a big fan of Gin- try to make a Gimlet with the popular grain spirit.

Everything you have to do is replace Gin with Vodka, and you're ready to go. No change in proportions, no additional ingredients. It's as easy as that.

This one is another beautiful variation. Before adding the traditional Gimlet ingredients to your cocktail shaker, muddle a few slices of cucumber in it.

You can add a bit of lime juice, too, to make the muddling a bit easier.

Garnished with a slice of cucumber, this Gimlet variation adds a really nice and fresh touch to the traditional version.

The Cucumber & Basil Gimlet is tweaking the original recipe a bit more.

1.5 oz of Vodka is mixed with 0.25 oz lime juice and 1 oz lemonade. Before shaking, two basil leaves are muddled together with 2-3 cucumber slices.

Shake the mix with plenty of ice and pour into a chilled glass with ice. Garnish with a basil leaf and a slice of cucumber to complete this Gimlet variant.