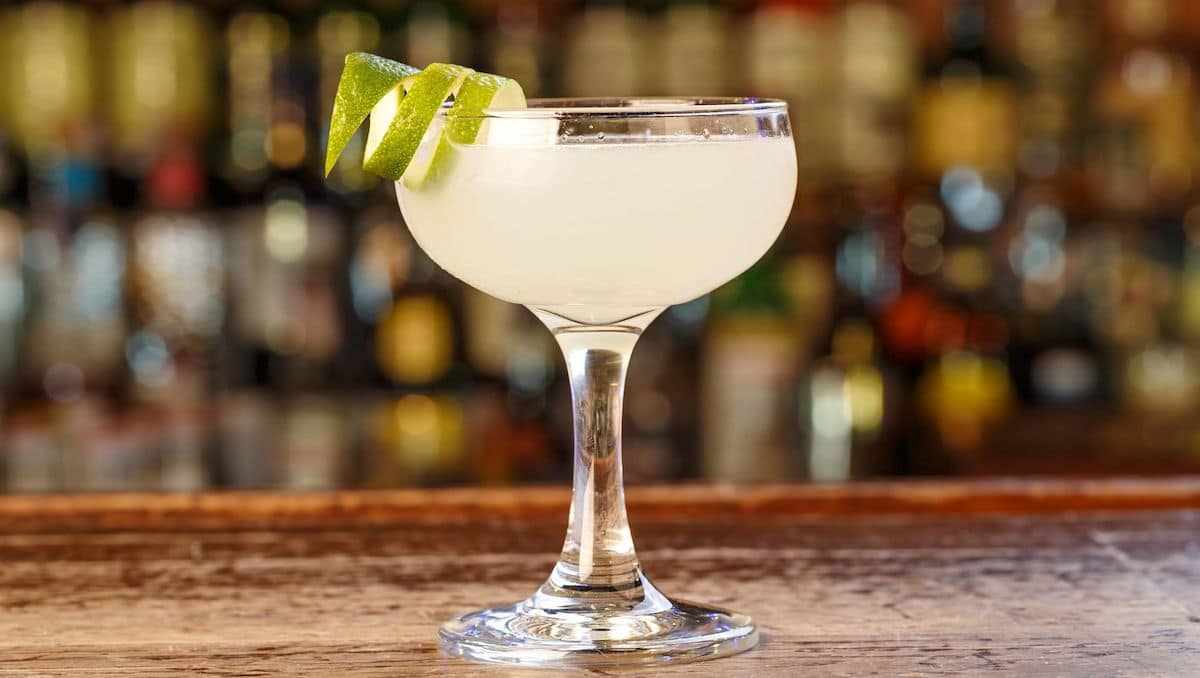 If you ask people about their favorite Rum cocktails, the Daiquiri will most certainly be one of the top choices. And the recipe is as simple as it is delicious.

Only three ingredients make the Daiquiri cocktail one of the most famous Rum drinks. The elements of a classic Daiquiri are Rum from Cuba, sugar, and lime juice.

Nowadays, there are plenty of variations of this classic cocktail. Most of them add different types of fruits to it.

The Strawberry Daiquiri, for instance, is highly popular, even though many bartenders are not too fond of it. I have to admit, it is nothing like a classic Daiquiri, but it's a delicious summer cocktail.

You only need three simple ingredients for a Daiquiri: Rum, lime juice, and simple syrup. However, I like to add a few drops of Angostura bitters for a little more depth of flavor.

The type of Rum should be white and unaged - ideally from Cuba, like Havana Club 3 years. If you can't get that, the Puerto Rican Havana Club works, too. For other fantastic options, refer to this guide to the best Rums for making a Daiquiri.

Further, the lime juice needs to be freshly squeezed to get the perfect Daiquiri. Apart from that, you can hardly go wrong with this simple and straightforward recipe.

History of the Daiquiri

Although hard to prove, most historians agree that Jennings Stockton Cox is the creator of the Daiquiri Cocktail recipe. Jennings was an engineer from the US, coming to the mines of Daiquiri shortly after the American-Spanish war.

The Americans won over the Spanish, and soon Roosevelt began exploiting the iron mines in Cuba. Jennings Cox was leading one of the initial exploring parties. -The one that took over the mine in the small town of Daiquiri.

At that time, expatriate workers from the US were offered huge salaries alongside monthly rations of tobacco and local Rum. Some of the Bacardi Blanco they received was mixed with sugar cane juice or coffee by the Cuban workers. When Jennings saw this, he began to experiment himself.

There is no documentation on when and how the first Daiquiri got served. However, the granddaughter of Jennings Cox claims that Jennings ran out of Gin when American guests came to visit him. So he mixed a drink with what was available: Rum, lime juice, and sugar.

The original recipe is available in handwritten form, declaring to use the juice of 6 lemons, 6 cups of Bacardi Blanca, six teaspoons of sugar, two small cups of mineral water, and loads of crushed ice".

After this event, the Daiquiri recipe remained within Cuba for a while. For one, the city of Daiquiri fought the plague. But also because another cocktail came up in Cuba around the same time. And it took America by storm.

You might have guessed already I am talking about the famous Cuba Libre.

How it came to America

How the Daiquiri came to America

Ultimately, it took about ten years until the Daiquiri cocktail made it to America, thanks to Captain Lucius W. Johnson.

With his ship USS Minnesota, he sailed to Cuba, intending to visit war sites of the American-Cuban war. During the journey, Johnson also visited the small town of Daiquiri.

Jennings Cox was still there, leading the exploitation of the iron mines. When Johnson arrived, he served his creation. Lucius Johnson loved it and took the formula with him to the US, to the Army and Navy club.

That was the first place the Daiquiri cocktail was mixed in the US. For this reason, some sources claim that Johson invented the drink. Others even suggest that it was an invention by Navy soldiers. The latter, however, is the most unlikely as there was strictly no alcohol allowed on Navy ships.

Allegedly, Johnson himself described his first encounter with the Daiquiri remembering the ratios Jennings Cox used to make the drink. The following statement got published in the Baltimore Sun newspaper:

'He mixed in each glass a jigger of rum, the juice of half a lime, and a teaspoonful of sugar. He then filled the glass with finely shaved ice and stirred it well. In that hot, humid weather, the ice melted rapidly, and the glass quickly became frosted.'

In any case, Lucius Johnson did a great job promoting the Daiquiri cocktail in the US. He also introduced it to the Baltimore University Club, which resulted in a Daiquiri version with bitters. A valid variation on the classic Daiquiri cocktail also today.

Slowly more and more bars picked up the recipe and started to serve the Daiquiri cocktail. Even one of the most prestigious hotels in the world at that time had it on their menu in the 1910s - the Astor Hotel in New York City.

Writers that made the Daiquiri Cocktail famous

Two of the most famous writers of this era made the Daiquiri a worldwide success.

The first one is rarely even mentioned when talking about the history of the Daiquiri. His name was F. Scott Fitzgerald. He was the first to name the Daiquiri in a Novel: in This Side of Paradise, published in 1920.

The second writer makes you instantly think of countless other spirits, cocktails, and bars around the globe: Ernest Hemingway.

He had an enormous impact on the success of the Daiquiri cocktail. He even created his very own variation of the drink, the Papa Doble. Doble stands for double the amount of Rum, and since Hemingway had diabetes, he replaced the sugar with a mix of grapefruit juice and Maraschino Liqueur.

Hemingway liked to sip his Daiquiris in El Floridita, Havana. At another bar in Havana, the Bodeguita del Medio, he even left a note on the wall saying: "My mojito in La Bodeguita, My Daiquiri in El Floridita.”

As substantial as the impact of those writers was, mentions in important cocktail books contributed still more to the success of the Daiquiri cocktail. Some of the most influential references are: