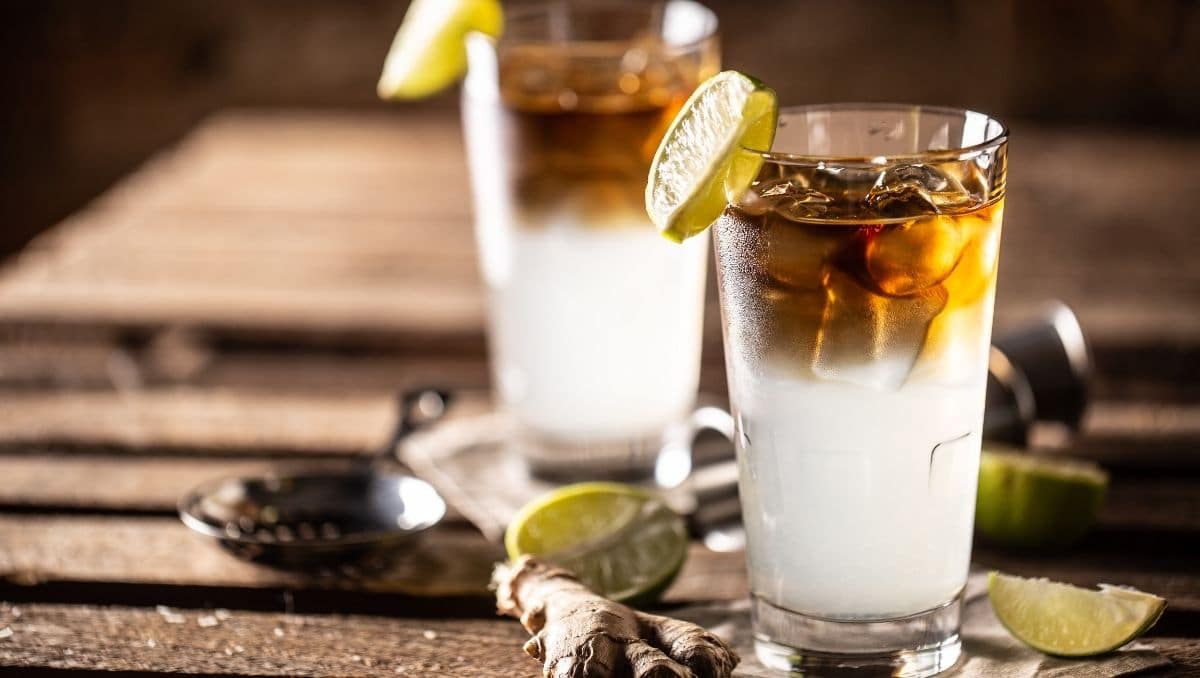 The Dark 'n' Stormy is an easy-to-make and flavorful three-ingredient cocktail. A delicious drink made of Gosling's Black Seal Rum, ginger beer, and fresh lime juice.

The Dark 'n' Stormy is a Rum-based cocktail closely related to another famous classic - The Moscow Mule. The classic Moscow Mule is typically served in a copper mug and consists of Vodka, ginger beer, and freshly squeezed lime juice.

If you are a fan of the Moscow Mule, the Dark 'n' Stormy is a great option to try a cocktail with similar ingredients but a very different taste. That is because the dark, unaged Rum brings such an intense and distinct aroma to the cocktail.

Even though the drink's history is not documented all the way to its beginnings, most likely, it got invented by sailors - quite similar to other famous cocktails like the Gin and Tonic or the Navy Grog.

Despite the lack of proper documentation, Bermuda is accepted as the official home of the cocktail. And that certainly makes sense.

Bermuda is not only famous for Rum but also for producing ginger beer. So it does stand to reason that someone from the island in the North Atlantic Ocean first created the drink.

But the main reason why Bermuda is the official home is due to the Rum company Gosling's. And that history does not go back quite so long.

Gosling's in Bermuda has been producing Rum since the very early 1800s. So, it's a company with a long tradition. However, only in 1991 did Gosling's Rum successfully register a trademark for the Dark n Stormy.

Since then, a cocktail that goes over the counter under the name Dark 'n' Stormy must officially be made with Gosling's Black Seal Rum. And Gosling's is serious about that. They enforced their rights, suing multiple other brands for promoting the drink with another Rum as the base.

So, for the past 30 odd years, there's literally only one possible solution to legally make a Dark 'n' Stormy.

The ingredients for making a Dark 'n' Stormy

The Dark 'n' Stormy is a beautiful mix of Rum, lime, and ginger beer. Mostly, for the acidic part, it gets served with lime juice.

In Bermuda, however, which is the home of the drink, you will usually get it without juice. There, it's normal to serve just a mix of ginger beer and Rum together with a lime wedge. That way, you can squeeze lime juice into your drink as you like it.

To lift the original recipe, I like to add a splash of simple syrup and a couple of dashes of Angostura bitters for extra complexity.

Which Rum for the Dark 'n' Stormy Cocktail

Again, a "correct" Dark 'n' Stormy has to contain Gosling's Black Seal Rum. Mixing your drinks at home, you don't need to worry about that much, though.

Nonetheless, to be fair, Black Seal Rum is an excellent fit for the drink. It carries notes of vanilla, caramel, and plenty of spice. Plus, it mixes perfectly with quality ginger beer.

There are quite some brands out there producing superb ginger beer. My favorites for the Dark 'n' Stormy are Bundaberg Ginger Beer, Fever Tree Ginger Beer, and also the one from Thomas Henry.

Regardless of which one you prefer, make sure you use beer and not ginger ale. Ginger Ale is only flavored with ginger, whereas actual ginger beer is brewed and fermented with ginger. Therefore, the beer version is a lot more ginger-forward.

Also, don't get confused by the term beer. Ginger beer is - at least usually - non-alcoholic. It is named beer due to the production process and the fact that, when it was invented, it used to contain alcohol.

Now back to the Dark 'n' Stormy: A splash of freshly squeezed lime juice helps to marry the flavors of the main components of the drink. Don't cut the corner with pre-bottled lime juice, as you need the taste of natural limes to make the drink perfect.

The extras: bitters and syrup

For the classic recipe, the first three ingredients are everything you need to create the cocktail.

But by adding a bit of rich simple syrup and a few drops of Angostura bitters, you can make the drink even more complex and tasty.