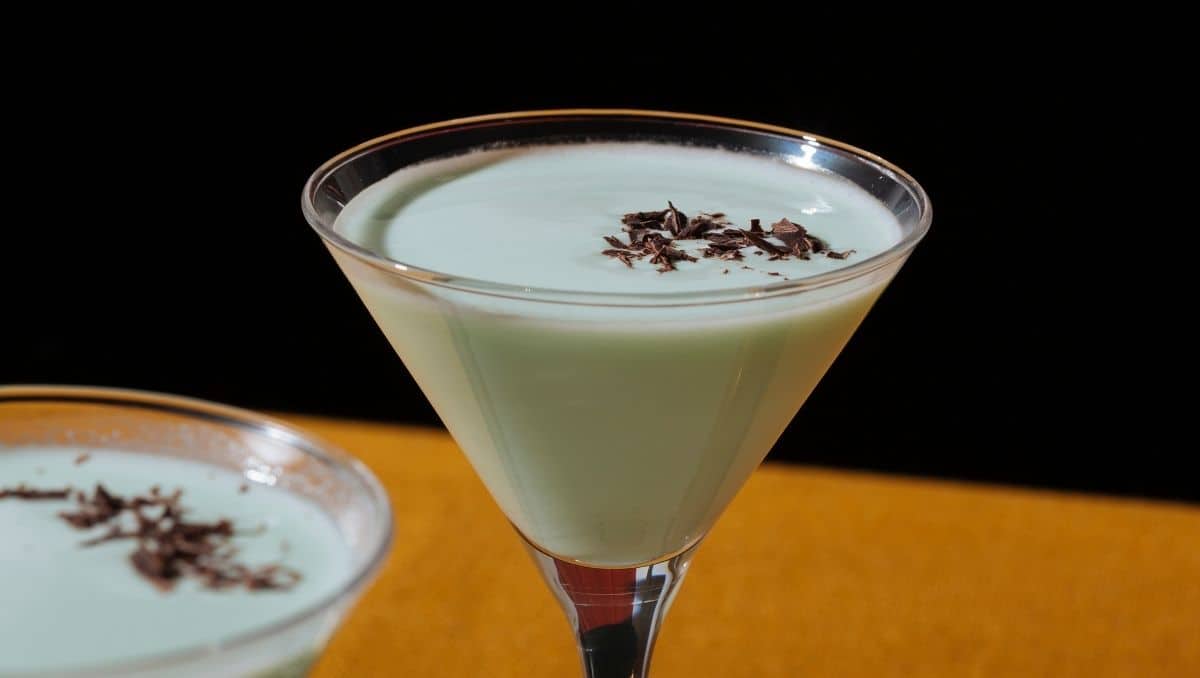 The Grasshopper is a minty, chocolatey, and creamy drink that is a perfect alternative to enjoy instead of a classic dessert.

The Grasshopper cocktail is yet another creation from the French Quarter of New Orleans, in line with classics like the Sazerac, Ramos Gin Fizz, and the Vieux Carré.

The Grasshopper is a sweet and minty drink, commonly consumed as an after-dinner drink. -A splendid mix of Creme de Menthe, Creme de Cacao, and heavy cream.

And it's due to the sweetness that this drink is predominantly a favorite of the younger folks not used to the harsh notes of alcohol.

Today, the drink sometimes comes across as a little outdated. But it was very famous all over the country during the 1950s and 60s. Especially in the Southern part of the United States, the drink was widely popular.

Ingredients of the Grasshopper Cocktail

For making a Grasshopper cocktail, you need Creme de Menthe, white Creme de Cacao, and heavy cream. And a bit of chocolate shaving for the top.

I prefer dark chocolate over milk chocolate because it's less sweet and goes well with the minty flavor of the drink. And while heavy cream should be widely known, Creme de Menthe and Creme de Cacao are not part of the essential cocktail ingredients of an average home bar.

As you might have guessed, Creme de Menthe is responsible for the green color of the Grasshopper cocktail. It has a sweet peppermint flavor. But despite the name, there's no cream involved here.

It is a Corsican-mint-infused grain liqueur with an alcohol content of 25%. It's also available colorless -white creme de menthe-, but the taste of both versions is the same.

That comes in handy for drinks like the Stinger cocktail, where you want the peppermint flavor without the green color.

Creme de Cacao also isn't as creamy as it sounds. Just like Creme de Menthe, it's a flavored liqueur. And it's available in dark and in a see-through version, the white Creme the Cacao. And the latter is what we need for the Grasshopper.

Otherwise, it would spoil the grasshoppy green color. Creme de Cacao tastes like milk chocolate and usually is scented with a hint of vanilla. The dark Creme de Cacao is what you would use in a Brandy Alexander to achieve the typical chocolaty look.

And if you wondered what the heavy cream is for, with all the other creamy components, now it's probably clear. With neither Creme de Menthe nor Creme de Cacao being creamy at all, you need the heavy cream for the Grasshopper's smooth and creamy texture.

History of the Grasshopper Cocktail

New Orleans is famous for many different cocktails. And while the Grasshopper cocktail is not one of the most iconic drinks from the "Big Easy", it still is a classic. And its story is tightly knit to a restaurant with the name Tujague.

The restaurant was founded in 1856 by Guillaume and Marie Tujague. Yet, after after they successfully managed the establishment for more than 55 years, they sold it to Philibert Guichet. And that Mr. Guichet is also the one that brought the famous Grasshopper to Tujague's menu.

Guichet originally invented the Grasshopper for a cocktail competition in New York. And although the Grasshopper drink only won 2nd place in this competition, Guichet managed to make it a true classic by bringing it to his restaurant menu.

Still, the exact time when he invented the drink isn't known. For a long time, it was a common belief it is from the 1920s.

However, according to historian Poppy Tooker, there is written evidence of the drink having been served at Tujague's as early as 1919. That puts the birth date of the green mint cocktail somewhere in the 1910s.

And until today, Tujague's is serving hundreds of Grasshoppers per week.

What makes this drink so special

Unquestionably, the Grasshopper drink got named after its bright and intense green color. But it's not only popular because of its visual characteristics. The sweet cocktail combines one of the most classic dessert flavor combinations - Mint & chocolate.

And these flavors also work very well in a cocktail. To enhance the taste and add a creamy note to the drink, heavy cream rounds of the cocktail.
And the thing that makes this drink such a brilliant dessert cocktail is the low amount of alcohol.

Creme de Menthe and Creme de Cacao only contain around 25% ABV each. And Heavy cream is obviously non-alcoholic.

If you mix the drink with the traditional equal parts approach, the result is a cocktail of approximately 15% ABV (calculating in the dilution). That's the equivalent of a heavy red wine.

If you use a bit more heavy cream, the result will become even less alcoholic. And that's what I decided to do in my recipe below. I want to make it a delicious dessert replacement that won't leave your guests unable to drive home after dinner. So grab your cocktail shaker, and make some Grasshopper cocktails.