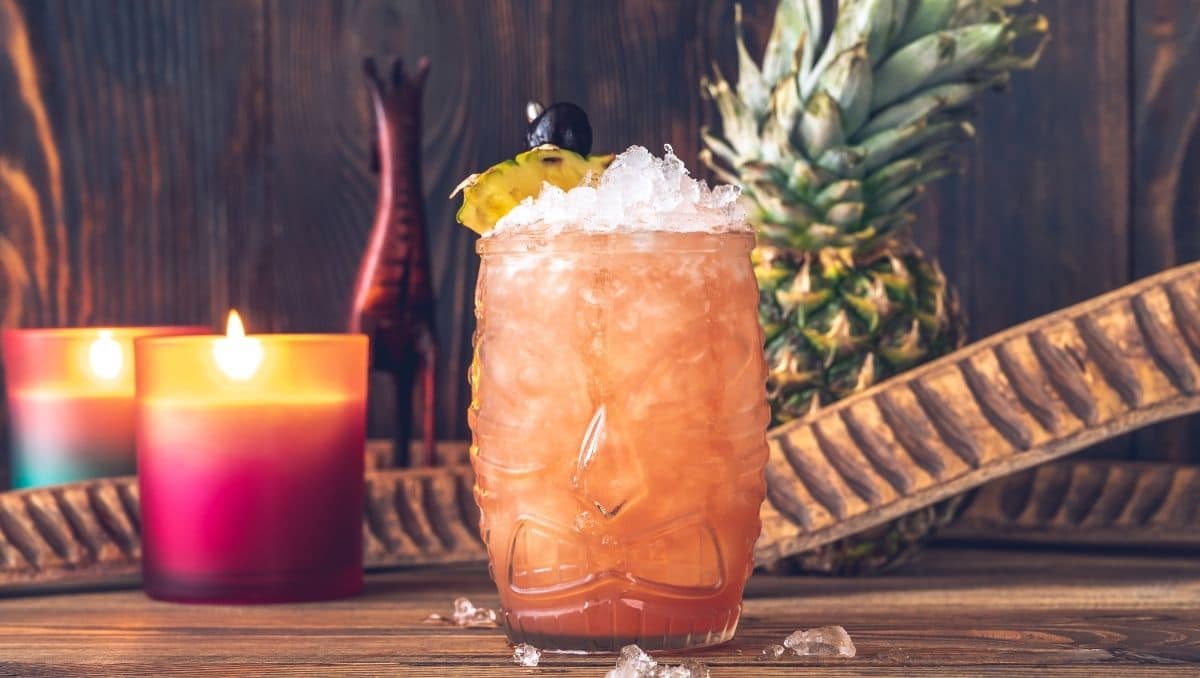 The Jungle Bird is an exotic representative of the Tiki cocktail culture. It contains dark Rum and fresh fruit juices, and it has a subtle herbal note.

When Jeffrey Ong first crafted his Jungle Bird cocktail, he probably had no idea what he was about to start.

Initially served in a hotel bar in Malaysia, the cocktail became an influential element of the second, more sophisticated wave of Tiki cocktails.

Looking at the ingredients, it is clear that the drink has everything a Tiki cocktail needs - Rum, lime juice, and some sugar.

However, around the time the Jungle Bird was invented, one would have had a hard time finding another Tiki drink featuring a bittersweet component. But that is just what the herbal liqueur Campari is.

So let's see who came up with the idea for the Jungle Bird and how it bridged the first and second waves of Tiki cocktails.

Ingredients for a Jungle Bird cocktail

Rum in the Jungle Bird

The original recipe for making a Jungle Bird doesn't ask for a specific type of Rum. Also, in John Poister's recipe from 1989, you'll only read "Dark Rum" in the instructions for the Jungle Bird.

Nonetheless, in most cases, bartenders opt for a Blackstrap Rum. That is a richer, darker, and more aromatic dark Rum. And Jeff Berry created his own variation in his 2002 Intoxica, featuring Jamaican Rum.

As so often, the juices from pineapple and lime should ideally be freshly squeezed. The freshness of those two will work perfectly with the bitter and sweet herbal notes from Campari.

Maybe you know the typical taste of Campari from other cocktails like the Negroni or Boulevardier. The two classics are fantastic representatives of cocktails with that herbal bitterness.

This bitterness is less pronounced in the Jungle Bird cocktail, but it still adds a unique layer to the drink that makes it so special.

The last part is Demerara syrup. A rich and flavorful sugar syrup, often used in Rum cocktails. If you want to make it at home or perhaps never have heard of it, take a look at our recipe to make Demerara syrup at home.

History of the Jungle Bird cocktail

And the bird theme really was taken seriously. For a few years, the bar served the Jungle Bird in a ceramic bird-shaped vessel. That changed a while later into a wine goblet with an engraved bird. -Too many guests had decided that the bird would make a nice little souvenir.

More than a decade later, in 1989, the cocktail was published for the first time in written form. John J. Poister included the recipe in his book "The New American Bartender's Guide".

Eventually, in 2002, Jeff "Beachbum" Berry printed a slightly tweaked recipe in his influential Tiki cocktail book "Intoxica". And presumably, it was Beachbum Berry who helped the drink to gain international recognition.

Now, not only Malaysians had been familiar with the unconventional Tiki drink Jeffrey Ong created, but also people everywhere in the world. What's more, the tropical name of the drink even inspired some newer establishments in New York and Sacramento.

Over time, the drink has been updated and optimized. In this particular case, that meant that the amount of pineapple juice was reduced a little. Plus, a preferred type of Rum (Blackstrap Rum) got established.

So, time to get your shaker out and mix the perfect Jungle Bird Cocktail.