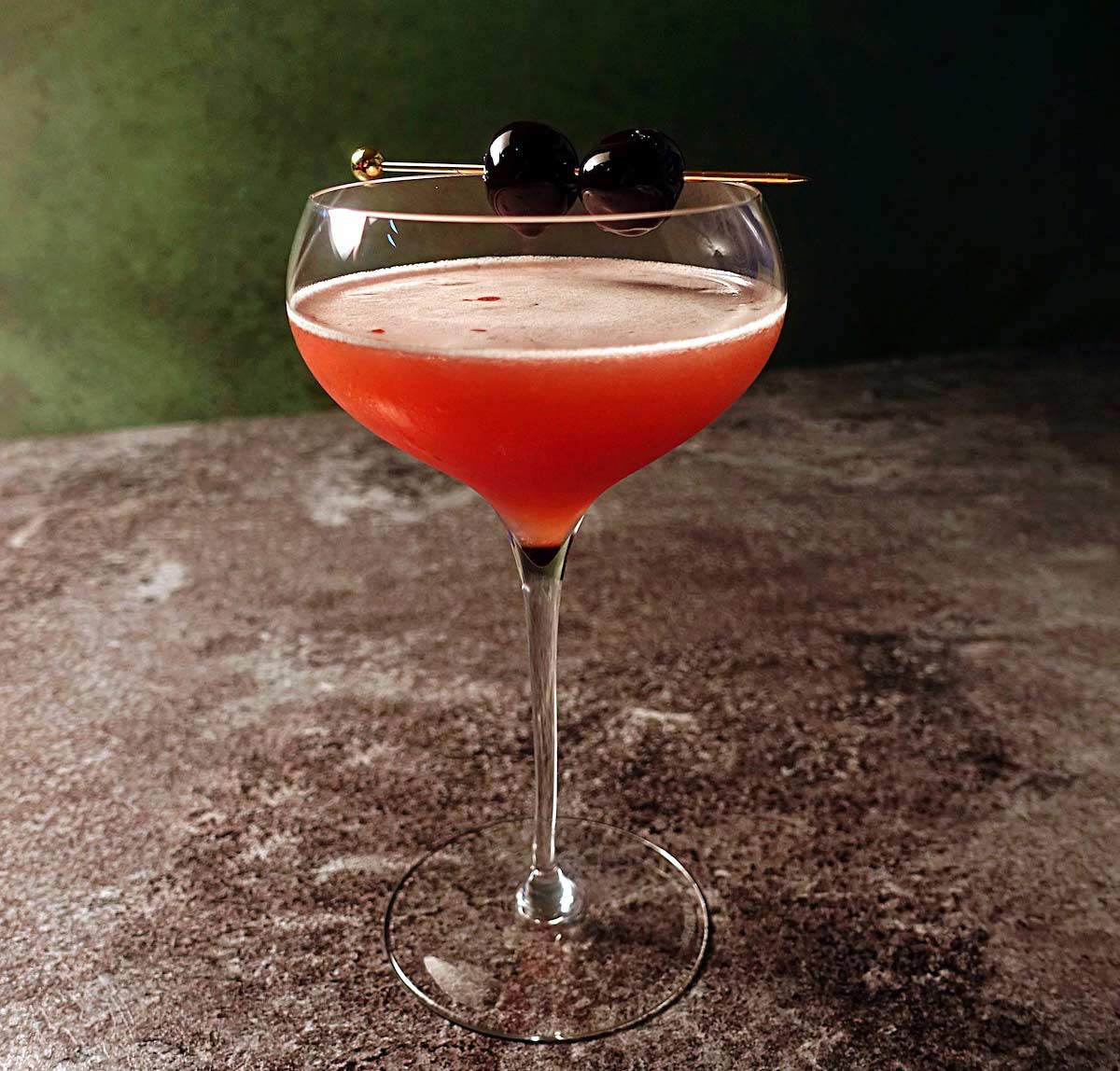 The Mary Pickford cocktail is a mix of Rum, pineapple, cherry, and grenadine. It honors the Canadian silent screen actress of the same name.

The Mary Pickford cocktail is a classic Rum drink with fruity and sweet notes that goes back to the prohibition era.

It made it onto the IBA's (international bartenders association) list of unforgettable cocktails. There it is accompanied by other vintage classics like the Porto Flip, the Whiskey Sour, or the Casino cocktail.

The Mary Pickford cocktail sports a pale or bright pink color, depending on the recipe and products you use. And the Maraschino liqueur adds some complexity and a beautiful almondy aftertaste.

Ingredients of the Mary Pickford

The Mary Pickford cocktail unites the always-winning, tropical combination of Rum and pineapple with the rare pairing of Maraschino liqueur and grenadine.

It's a very recognizable cocktail with a sweet taste that strongly highlights its base spirit.

Rum in the Mary Pickford Cocktail

As the flavor of this drink depends strongly on your choice of Rum, it's vital to choose thoughtfully.

For instance, the recipe featured in the renowned Savoy Cocktail book asks specifically for Bacardi. However, Bacardi changed his formula since the book first was published in the 1930s. So you cannot take that recommendation at face value.

The IBA does recommend White Rum. But many do, in fact, prefer aged Rum for the Mary Pickford cocktail. And dark Rum certainly goes well with pineapple.

Yet, as the other elements of the drink are quite sugary, I recommend a Rum that still has that alcoholic bite to cut through the sweetness. So try a quality White Rum or darker Rum that only aged shortly.

Maraschino liqueur is an Italian liquor made from cherries growing in the Dalmatian region of today's Croatia. It's clear-colored and famous for its unique and complex cherry aroma.

The liqueur is slightly bitter, spicy, and definitely less cherry-forward than you might expect. Especially when compared to the sweet Maraschino cherries made with it.

It's vital to use a quality product using real Marasca cherries here. Like, for example, the products from Luxardo or Lazzaroni.

And the use of Maraschino liqueur in the Mary Pickford cocktail also suggests the perfect choice for the garnish: Maraschino cherries.

Grenadine in the Mary Pickford Cocktail

Grenadine is the element that gives the Mary Pickford cocktails its pink shade. Only a teaspoon is enough to color the drink. Using more will quickly make your cocktail unpleasantly sweet.

The extensive sweetness is also why grenadine is not among the favorite ingredient of bartenders. Additionally, the syrup made with pomegranate has a reputation for tasting artificial. - And unfortunately, that is often true.

Therefore, your best option is to use homemade grenadine. But if you don't have the time, go only for naturally flavored products.

As with lime and lemon juice, pineapple juice performs best in a cocktail when you squeeze it from fresh fruit.

If you don't want to go through the trouble, get 100% natural, pineapple juice, unsweetened and made from actual fruit and not from concentrate.

History of the Mary Pickford cocktail

The one thing that is certain about the story behind the Mary Pickford cocktail is that it got named after a famous Canadian actress and producer.

Mrs. Pickford was one of the most famous Hollywood actresses of her time and appeared in many silent film movies between 1909 and 1933s. She even got the telling nickname American Sweetheart.

The height of her career was during the 1920s, and that was also when the pink cocktail was invented.

What people wish had happened

The most told story goes that Mary Pickford -whose birth name was Gladys Marie Smith- was working on a film set in Havana, Cuba in the early 1920s.

One night, two local bartenders, Eddie Woelke and Fred Kaufman, supposedly mixed the pink cocktail for the famous actress and named it after her. Some sources even claim that Charlie Chaplin was with her.

What -apparently- really has happened

However, a story from early 2021 in Vanity Fair declares to have uncovered that this story is, in fact, bogus and that Mrs. Pickford didn't set foot on Cuban ground during the alleged period.

It does not rule out that the two bartenders mentioned invented the cocktail in Cuba, but it would mean that Mrs. Pickford hadn't been there when they did.

Either way, the first known printed version of the Mary Pickford cocktail appeared in When It’s Cocktail Time in Cuba, a book by Basil Woon. And two years after that, Harry Craddock included it in its famous publication The Savoy Cocktail Book.

Other Rum and Pineapple cocktails

Rum and pineapple is a much-beloved combination in mixology. It works particularly well in tropical drinks, and many cocktails tied to modern Tiki culture work with this pairing.

One example is the Bahama Mama, a cocktail that mixes the Rum-pineapple-duo with coffee liqueur and lime. Some others are the Rum Runner or the Barracuda cocktail.

And then there's one of the ultimate Tiki classics, the Zombie. Besides pineapple and different types of Rum, it contains Pernod, falernum, bitters grenadine, bitters, and Donn's Mix.

And then, of course, the one that immediately comes to mind is the Piña Colada. The delicious, sweet coconut cocktail is absolutely delicious when using the right ingredients. If you like a bit of orange with it, the Painkiller is a beautiful riff on the tropical evergreen.