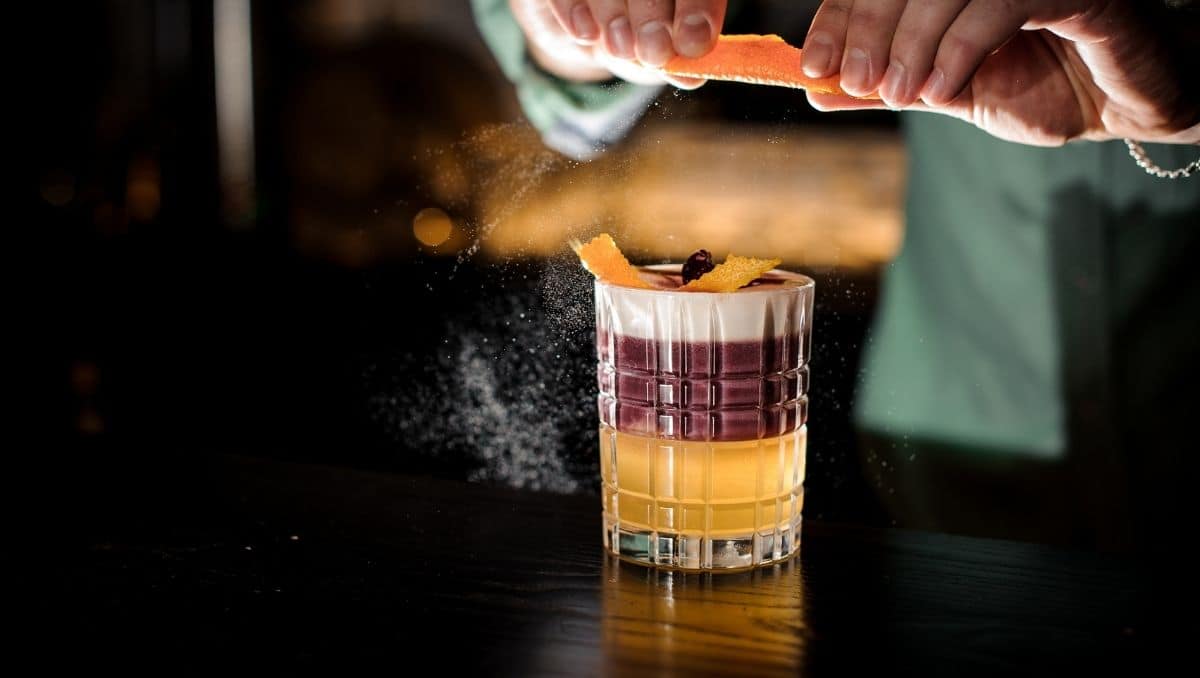 The New York Sour is one of my favorite sour cocktails. It is a beautiful Whiskey Sour topped with a lush red wine float, and the flavors are just perfectly balanced.

Sour cocktails are a delight. Usually, it is an uncomplicated and delicious mix of spirit, citrus, and simple syrup. Some recipes include egg white to create a rich and more creamy mouthfeel.

Also, many of the most famous cocktails are part of this cocktail family: The Pisco Sour, Gin Sour, Rum Sour, and, of course, the legendary Whiskey Sour. For a more comprehensive overview, check out the list of our favorite Sour Cocktails.

The New York Sour is probably the most popular riff on a classic Whiskey Sour recipe and a splendid cocktail. It is pretty easy to make, well-balanced, and very complex in taste, plus it looks stunning.

By the way, if you want to know more about the Whiskey Sour cocktail and its riffs, you can read about it in my article about Whiskey Sour & its variations.

Which Whiskey for a New York Sour

I advise using Bourbon for making a New York Sour cocktail. The sweetness of the Bourbon goes exceptionally well with the dryness of the red wine float.

However, you will also find many versions using Rye as the base for a New York Sour. So if you have an open bottle of a decent Rye handy, ultimately, that will work, too.

Best red wine for the float

The red wine float is essential for a New York Sour. Therefore, you should not simply use any leftover red wine you find in your fridge.

A quality fruity and dry red wine will deliver far better results than an overly sweet one - or one you might initially have intended to use for cooking.

A Bordeaux-style red wine usually is a good choice. But also, a fruity and dry Rioja, Shiraz, Merlot, or Malbec are suitable wines for a New York Sour.

For me, a great New York Sour needs that perfect egg white foam. It tastes fantastic, creates a nice consistency, and enhances the visual presentation.

In order to get a nice and firm egg white foam, I recommend performing a dry shake first.

That means shaking the drink for about 15 seconds without ice to help to get a thicker foam. The reason is that egg white emulsifies easier, creating a frothy and creamy foam.

If the result is still not to your standards, you can extend the dry shaking time to approximately 30 seconds. That should be more than enough shaking time to create a perfect egg white foam.

If you're not into egg white in cocktails, you can also create the foamy part with Aquafaba. For further information, please read my post about Aquafaba vs egg white.

History of the New York Sour

The Whiskey Sour is one of the most successful cocktail creations of all time.

Invented by Jerry Thomas and first printed in his "Bartenders Guide" in 1862, the drink quickly became one of America's most loved cocktails. And not only is it an ever-green cocktail, but it also led to many exciting and tasty variations.

It's unclear when and where exactly the New York Sour got invented, though. But following all hints available, it's likely that it dates back to Chicago during the 1880s.

Apparently, it was there that the traditional recipe of Whiskey, lemon juice, and sugar got extended by a scrumptious float of dry red wine. And this little twist adds quite some complexity to the drink. Plus, it does look pretty impressive.

Early recipes of the New York Sour had been without egg white. Yet, modern recipes often use it to create a smoother mouthfeel. And as a nice side effect, the egg white creates a third layer of color to the drink.

Talking about the early version of the New York Sour, I should mention that it was initially named Continental Sour or Southern Whiskey Sour. It was only in the 1900s that the name changed to New York Sour.