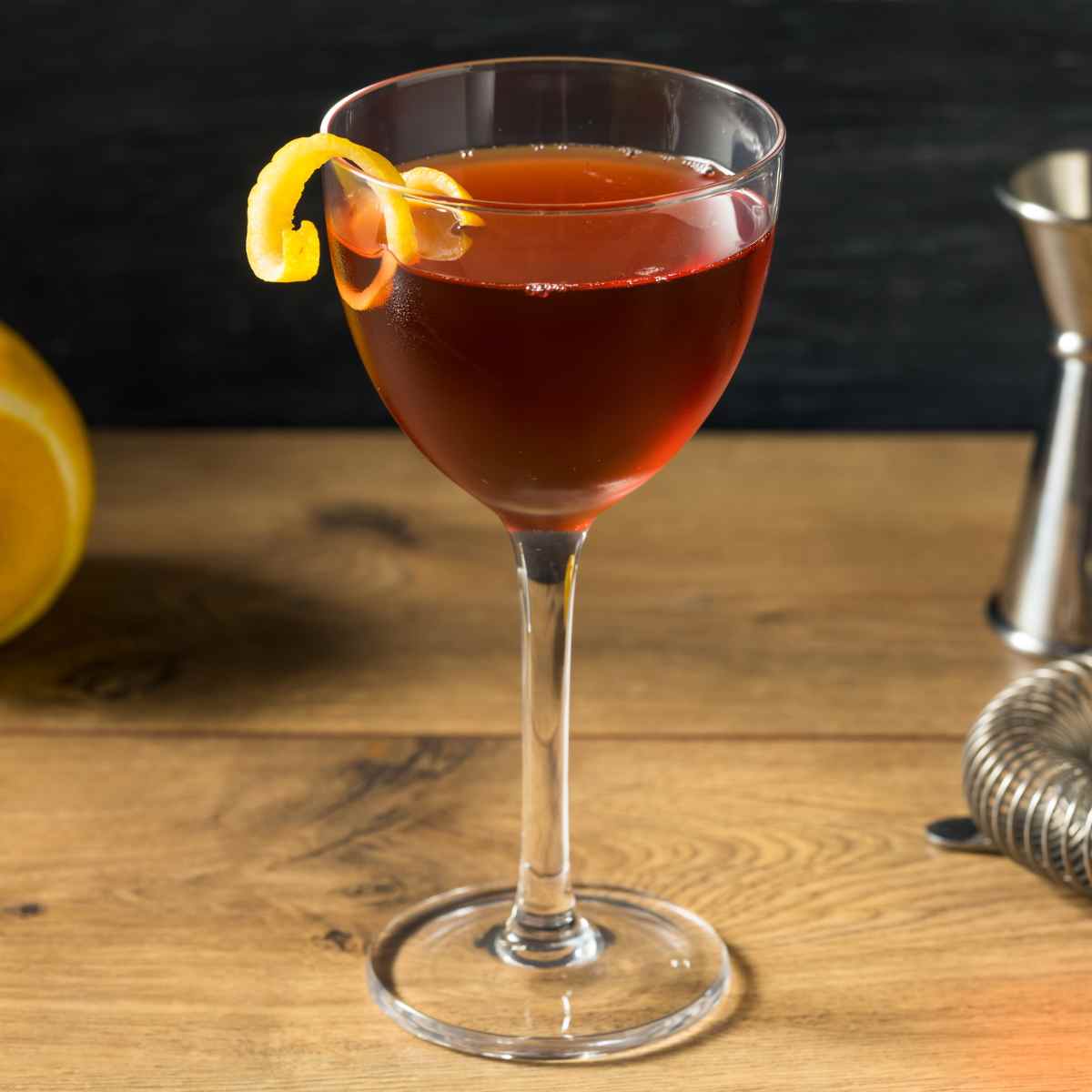 The Old Pal cocktail is a spicy and herbal twist on the Negroni cocktail made with Rye Whiskey. To differentiate the drink further, Sweet Vermouth replaces Dry Vermouth.

The Old Pal cocktail recipe is closely tied to two other classic cocktails, the Negroni and the Boulevardier. The original recipe is the Negroni. This gin-based aperitivo cocktail was developed in Florence, Italy, and is the base template for many variations of which the Old Pal is one of the best-known.

Like the Boulevardier, its recipe was developed by Harry MacElhone. And even though both are based on Whiskey, the taste of these drinks is remarkably different.

The recipe of the Old Pal cocktail consists of only three ingredients:

To make an Old Pal cocktail, you need equal parts of Rye, Dry Vermouth, and Campari. There is a trend of increasing the spirit base to get a more Rye-forward version, just like many bartenders increase the Gin ratio in a Negroni.

I recommend beginning with the classic 1:1:1 approach and then slowly increasing the ratio of Rye up to 2:1:1 if you feel you need more spice in the drink.

The recipe of the Old Pal is often compared to the Boulevardier as, at first sight, both appear similar. However, tastewise the drinks couldn't be further apart.

The Boulevardier is a simple modification of the original Negroni recipe, replacing Gin with Bourbon. The result is a bittersweet cocktail with herbal complexity from Campari. The Old Pal, on the other hand, has strong spicy notes from Rye Whiskey paired with herbal bitterness in Campari and lacks the sweet touch the Boulevardier gets from Sweet Vermouth.

The Old Pal is a very tart and potent cocktail, dominated by spicy flavors, with no sweet or intensely fruity flavors to be found.

Instead, the sharp and spicy taste of Rye Whiskey pairs well with the bitter and herbal notes of Campari and Dry Vermouth.

The first time the recipe got published by MacElhone was back in 1927 when he mentioned the recipe in his book Barflies and Cocktail (see image below). [1] The snippet shows that MacElhone dedicated the cocktail recipe to William Sparrow Robinson, a sports editor working for the New York Herald - naming it My Old Pal.

He also lists the ingredients as 1/3 Rye, 1/3 Campari, and 1/3 Italian Vermouth. That is interesting because Italian Vermouth is synonymous with Sweet Vermouth, not Dry as we know it today. The reason for this change is easy to explain: MacElhone himself published another recipe for this drink in his book ABC of mixing cocktails in 1930 (see image below). [2]

This time the Old Pal cocktail recipe includes Rye, French Vermouth, and Campari. Also, the drink's name got an update from "My Old Pal" to a shorter "Old Pal."