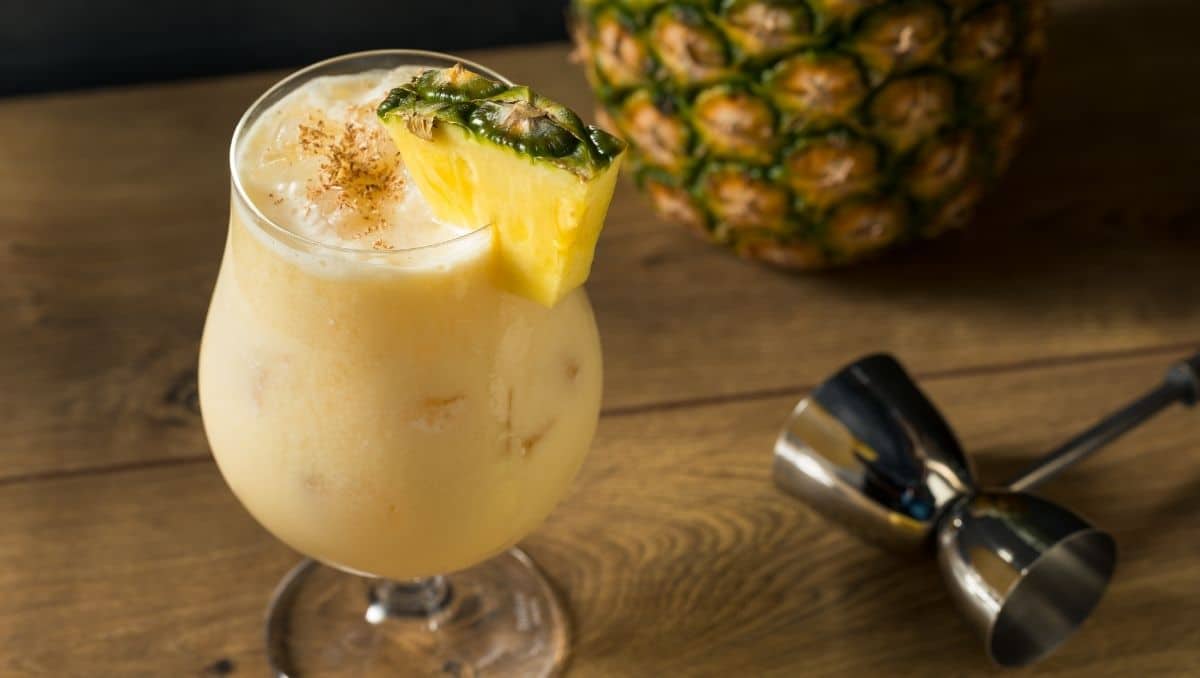 The Painkiller is a tropical Rum cocktail and a beautiful riff on another classic Rum drink - the Piña Colada. Find out want you need to make it perfect.

If you like a good Piña Colada, try the Painkiller cocktail. The Painkiller is a delicious riff that's more fruity and just as tropical.

The main difference between the two is the orange juice. And this addition not only makes the cocktail fresher but also adds a layer of complexity.

Top it with some freshly grated nutmeg, and your Painkiller is a sensational Tiki cocktail.

Ingredients of a Painkiller

As a riff on the Piña Colada, the Painkiller also shares quite some of its ingredients. Here's the list of all the things you'll need to make a Painkiller:

The crucial parts of the recipe are using fresh juices and the cream of coconut. Cream of coconut is often mistaken for coconut cream, but those two products are not the same thing.

Only use freshly squeezed orange and pineapple juice. It makes an immense difference if you work with flavors and the natural sweetness of fresh products instead of store-bought juice.

For juicing pineapple, use a pineapple cutter to remove the fruit flesh. Then juice it and keep the pineapple shell. You can use the hollowed-out fruit to serve your Painkiller in it. Or other tropical drinks like a Piña Colada or a Bahama Mama.

The Rum in a Painkiller

Traditionally the cocktail is made with Pusser's Rum. Pusser's is a recreation of the original British Navy Rum. Until 1970, sailors of the British Navy got provided with a daily ration of Rum.

Pusser's decided to honor this tradition by mimicking the Rum and its characteristics. Today the Rum is distilled and aged in Guyana and made of sugar cane growing in the Demerara River Valley.

Coconut cream vs. cream of coconut

Cream of coconut is a key ingredient in the Painkiller cocktail - the same also applies to the Piña Colada, btw. So here's the difference between cream of coconut and coconut cream in short form.

Coconut cream: An unsweetened and thick cream with a strong coconut flavor. It gets made by reducing coconut milk, so the ratio of water decreases and, in turn, the percentage of coconut in the mixture increases.

Cream of coconut: A syrup-like sweetener for many cocktails. Usually, it has a base of coconut cream or coconut milk combined with loads of sugar.

You can get it in your local supermarket or make your own cream of coconut at home. And when done right, the homemade version will taste beautiful and is really easy to make.

Garnish for the Painkiller

The freshly grated nutmeg on top of the drink may sound like a garnish. But this little sprinkle will add the needed warm and aromatic note to the cocktail. So make sure not to leave the nutmeg off.

History of the Painkiller cocktail

The Painkiller cocktail first popped up in the 1970s. It got invented in the "Soggy Dollar Bar" in the British Virgin Islands, where sailors had to swim to reach it - hence "Soggy". The place was owned and managed by Daphne Henderson.

Charles Tobias, the founder of Pusser's Rum, someday became friends with Henderson. And when he tried to recreate the signature drink at her Soggy Dollar Bar, the customers enjoyed his slightly different and less sweet version.

The drink became super successful at Henderson's bar, and Tobias started to promote it as Pusser's Painkiller. Problems arose when a bar in New York opened under the name Painkiller offered the namesaked drink.

In the 1980s, Pusser's decided to trademark the Painkiller and launch a massive marketing campaign. That meant that whenever someone ordered a Painkiller at any bar in the US, the cocktail had to be made with Pusser's Rum - except for your home bar, obviously.

A following trademark lawsuit with the Painkiller bar in NYC led to changing the bar's name to PKNY.

As a consequence of this ruling, many bartenders and bar managers decided to boycott Pusser's Rum. Some even went so far as to intentionally promote Painkiller cocktails made with any Rum other than Pusser's Rum.

Variations and tips for making the Painkiller

Though officially made with Pusser's Rum, there are plenty of alternatives. If you want to keep the ingredient traditional, use a Navy Rum.

If you don't have a Navy Rum, the best single substitute is a full-bodied and rich dark Rum.

Another good way to build the Rum base is to use two different Rums. Like in a Piña Colada or many other Tiki cocktails, a base of white Rum mixed with dark Rum will create a deep and flavorful base.

Quite possibly, the very original recipe from the Soggy Dollar bar got made using two different types of Rum. If you want to play with the recipe, try increasing the amount of Rum or the amount of pineapple juice in the cocktail.