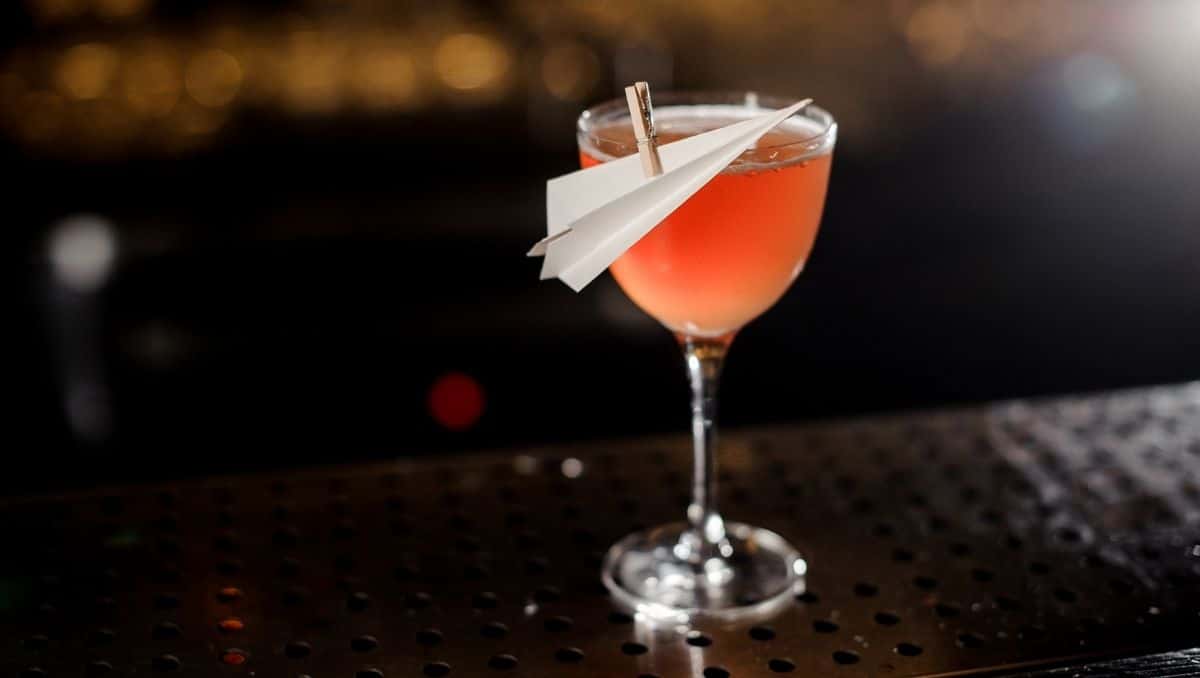 The Paper Plane is a favorite of many and a modern cocktail classic. It is a bitter, sour, and herbal cocktail based on Bourbon.

Inspired by a true cocktail classic, the Paper Plane Cocktail is a relatively modern cocktail recipe. It is a whiskey-friendly twist on the Last Word - and the name is just as avant-garde.

The beautiful red and pink-hued Paper Plane has a unique and well-balanced taste: bittersweet with intense notes of Bourbon and a pinch of zestiness.

The drink's unusual name goes back to a summer hit from M.I.A. with the same title. Paper Plan Cocktail inventor Sam Ross once stated that this song "was blasting on repeat the whole summer we worked on the drink."

According to the inventor, Sam Ross, you should opt for Bourbon with an ABV slightly above average when making a Paper Plane Cocktail. Anything in the range of 43% - 46% vol. (or 86 - 92 proof) will work fine.

The reason for using such a strong base is simple: more taste and body for the resulting drink.

These days, the two standard Amaros used in the drink are mostly Amaro Nonino Quintessentia and Aperol. But in the original version, served in The Violet Hour, Ross used Campari.

However, to pull back on the bitterness, he went with Aperol when he brought the drink to New York.

Probably, it had been this minor change in the recipe that kicked off the success of the cocktail.

Aperol and Amaro Nonino bring a perfectly balanced sweetening element to the drink that carries just the right level of bitterness. Instead of Amaro Nonino, you could use one of these Amaro Nonino substitutes.

For the sour part, best use freshly squeezed lemon juice to get that tangy notes in your drink. Better refrain from using store-bought juice because the result will be far from how good it could be.

To round off the drink, you can add a small plane made of paper to the cocktail glass. This iconic little garnish occurs in cocktail bars everywhere and adds a playful touch to this delicious drink.

History of the Paper Plane cocktail

Thinking about the Paper Plane, you might get the idea that this drink has a long history. You also will have a hard time finding a bartender who doesn't know this drink, and you get the cocktail in almost all cocktail bars in the US.

So, surely it has to have been around for at least decades, right? Well, one decade, yes, but that's it.

Sam Ross, a bar owner and bartender from New York City, invented this pretty and delightful drink in 2007. Not quite so long ago, I'd say.

Sam Ross is usually mixing drinks in New York City. However, he created the Paper Plane cocktail recipe specifically for a bar in Chicago.

He was part of the crew that mixed drinks at the opening of The Violet Hour bar in the Windy City. And the cocktail somehow became the star among all drinks served.

Garnished with a tiny plane made of paper, the whole concept of the Paper Plane is just perfectly thought-through.

The success during the opening led Ross to take his creation back with him to New York City. And after serving it for a while at the Milk & Honey bar, the Paper Plane quickly became a crowd favorite there, too.

A splendid riff on the Last Word

As mentioned above, the Paper Plane Cocktail is a riff on the classic cocktail recipe for the Last Word. Yet, at first sight, both drinks don't look too similar.

The components for making the Last Word are Gin, lime, Maraschino Liqueur, and Green Chartreuse. As opposed to the Paper Plane recipe, where you find Bourbon, fresh lemon juice, Italian Amaro, and Aperol on the ingredient list.

Instead, it is the general template of the drinks that is similar:

Both usually contain equal parts of each ingredient: a mix of spirit, citrus juice, and two additional liqueurs or Amaros to sweeten the drink.

It's a perfect example of how a riff on a cocktail can successfully evolve into something completely different.