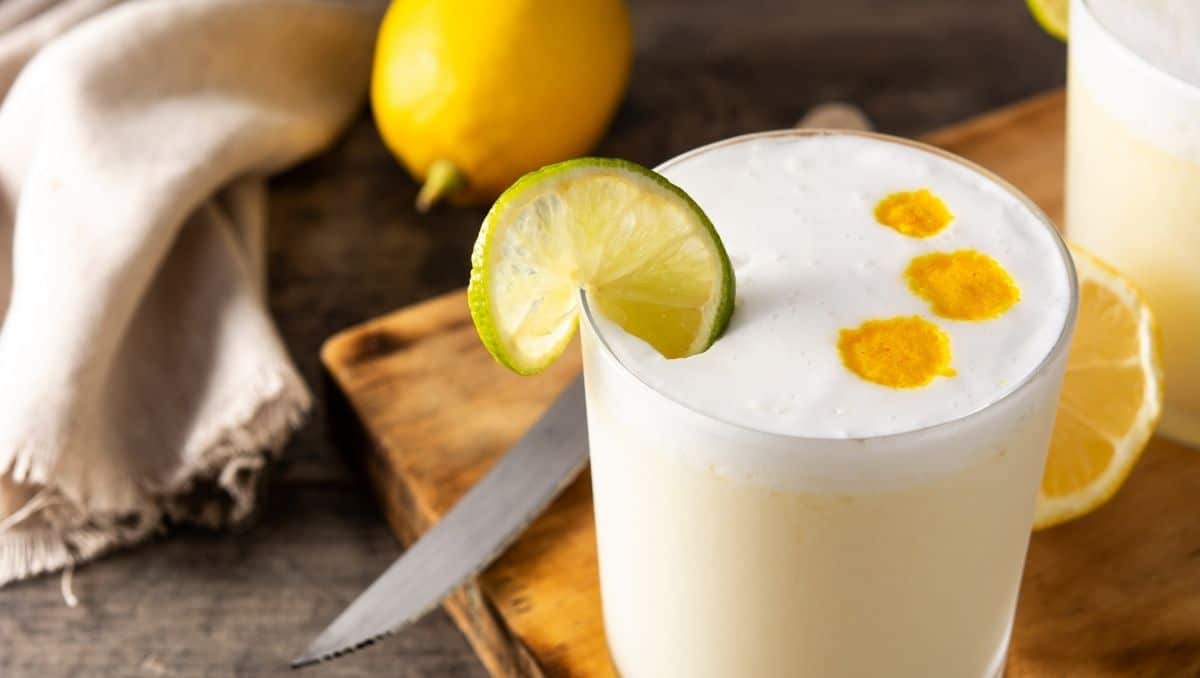 The Pisco Sour is a delightful cocktail. One of South America's most famous boozy exports whose main element is a local and unaged Brandy called Pisco.

The discussion on who actually created Pisco is long and goes on for ages. Neighboring countries Chile and Peru both claim to be the inventor of the famous Pisco, a grape-based Brandy. And the countries not only fight about the spirit, but they also profoundly disagree about who invented the Pisco Sour cocktail.

The Pisco Sour is a classic sour cocktail. It is similar to the Whiskey Sour or the Gin Sour and consists of a mix of spirit, fresh citrus juice, simple syrup, and egg white. And while Chile and Peru are still arguing about the origin of the Pisco Sour, it seems that, in fact, the US played a key role in creating this cocktail.

Continue reading to learn more about the Pisco Sour, its history, and how you can make this delicious drink at home.

History of the Pisco Sour

Many of the old and classic cocktail recipes have an unclear history. And more often than not, there are various stories on where the respective drink came from. But usually, the discussions about the true origin of a cocktail are calm and civilized. With the Pisco Sour, I find it a bit different and somehow more exciting. Chile and Peru are fighting fiercely and passionately over the origin of the Pisco Sour.

In both countries, Pisco is the national spirit. And the dispute about the origin of the Pisco ultimately evolved into one about the Pisco Sour cocktail. During the 1980s, a Chilean newspaper attempted to claim the cocktail for Chile once and for all. They wrote a story about the first appearance of the cocktail and declared Elliott Stubb, a British citizen, the creator of the drink. Stubb opened and managed a bar in Iquique (today belonging to Northern Chile, back then part of Peru). But when looking closer into the subject, the quote that was supposed to prove that Stubb invented the Pisco Sour really was about the Whiskey Sour -A forerunner of the famous Pisco cocktail.

In the late 2000s, a team of Luis Guillermo Toro-Lira Stahl (a hell of a name if you ask me) and Michael P. Morris traced the roots of the Southern American cocktail. And the result of it was that Victor Vaughan Morris Jones most likely is the inventor of the Pisco Sour.

Victor Morris is the grandfather of Michael P. Morris, one of the researchers. Originally from Salt Lake City, Morris senior moved to Peru in the very early 1900s. When working as a Cashier for the Cerro de Pasco railway company, he mixed drinks for the inauguration of the Oroyo line. Morris mixed up Whiskey Sours until they ran out of Whiskey, and due to a lack of alternatives, he switched to the widely available Pisco.

Morris later moved to Lima and opened a bar in the Peruvian capital city named Morris bar. The bar became famous for its Pisco Sour. The guest book from these days still exists and shows many people praising the Pisco Sours. And if that's not enough proof for you, the very first mention of a Pisco Sour from 1921 backs this claim.

The Peruvian magazine Mundial states in 1921 that the drink was invented by "Mr. Morris". However, some may understandably think the undertaking by the younger Morris perhaps may have been a little biased.

Pisco is a type of Brandy made from grapes. Therefore the taste of the spirit is very grape forward. And depending on the species of grapes, the flavor can vary slightly. Most Peruvian Pisco Sours are made with Pisco from the Quebranta grape or a mixed-grape version (acholado). Rarely the more aromatic Italia grape Pisco is used.

If you want to know the difference in flavor, nothing is better than tasting yourself. But in case you don't have the chance to do that, here's a pretty impressive overview of the different Pisco grape types.

How to make a Pisco Sour

I discussed the main ingredients already. Quality Pisco, freshly squeezed lime juice, simple syrup, and an egg white. But besides those, another element makes an essential part of the recipe. The three drops of Angostura bitters are iconic for the Pisco Sour. Angostura bitters are a famous brand of cocktail bitters widely used in cocktail recipes. And if you don't have this in your home bar, I highly recommend purchasing a bottle.

The drops of Angostura bitters belong on the delicate egg white foam on top of the drink. For getting the foam right, it's crucial to use the correct method of shaking. Performing a dry-shake first helps with emulsifying the egg white and creates a thicker foam. For that, shake the cocktail without ice for 15 seconds. Then open the shaker, add ice, and shake again for 5 - 10 seconds.

Another tip for egg white is to use fresh and organic eggs - the fresher the eggs, the better the foam on top of your cocktail.

Is a Pisco Sour shaken or blended?

Even if it may sound weird, in Peru, many bartenders blend this drink. And indeed, that delivers splendid results. If you fancy trying this at home, think about adding a tiny bit more sugar than you would for a shaken recipe. The blended cocktail will taste much rounder with a bit more sweetness.

Outside of Peru, the Pisco Sour almost always is shaken. That's also the version I personally prefer. Performing a dry shake first, shake again with ice, and garnished with three drops of Angostura bitters.