Read how to make an excellent Scotch Old Fashioned. This riff on the classic cocktail has perfect balance without being too inventive.

As the name suggests, a Scotch Old Fashioned replaces the classic Whiskey base with peated Scotch Whisky. The result is a smoky take on an Old Fashioned cocktail, balanced with chocolate bitters and a Maraschino cherry.

The traditional Old Fashioned cocktail is one of the oldest cocktail creations. It is a simple mix of Bourbon or Rye with a sugar cube, a few dashes of Angostura bitters, and an orange peel.

Today, you can see twists on the classic recipe everywhere. Yet not all of them are actually good and push the limits too hard. But the Scotch Old Fashioned is a winner.

For this Scotch Old Fashioned recipe, we keep the number of ingredients at three, plus garnish, as in the original.

For this twist on the Old Fashioned, don't be afraid to use a more peated Scotch and add some serious smoky notes to the drink.

My recommendation is a Laphroaig 10 years.

Bitters in the Scotch Old Fashioned

Angostura bitters aren't the perfect combination in this recipe. Instead, go with chocolate bitters.

The chocolate bitters add sweetness and richness to the drink. They also balance the Scotch and restain the smoky taste.

They do a terrific job in rounding off the cocktail. Way better than the regular choice of Angostura bitters would.

If you would like to experiment with the bitters, we have a whole article dedicated to finding the best bitters for an Old Fashioned. Check it out and try some of the recommended options.

Instead of Demerara syrup, you could also go for the classic approach using a sugar cube or regular simple syrup.

However, using Demerara syrup makes the drink a lot easier to mix and more complex and rich in taste.

For the garnish, best use a Maraschino or brandied cherry instead of the classic orange peel.

You can also stick to orange peel, but the combination of chocolate, cherry, and peated smoke is so good that I prefer mine with a rich and scrumptious Maraschino cherry.

If you can't get them or don't want to spend the money, you can find how to make these deliciously flavorful cherries in this recipe for homemade Maraschino cherries.

The classic Old Fashioned follows a straightforward template: A sugar cube soaked with Angostura bitters, Bourbon or Rye Whiskey, and a citrus peel as garnish.

The soaked sugar cube is placed in a Whiskey tumbler and muddled with the help of a splash of water. Then ice cubes and Whiskey are added.

Finally, the drink is stirred and then garnished with a citrus peel. Typically this uses to be a peel from an orange.

Modern twists on the Old Fashioned

Over time, numerous variations on the classic Old Fashioned established themselves.

You can find riffs on the recipe using Old Tom Gin, Genever, Brandy, Tequila, and even exotic spirits like Cachaça.

Of course, there are also twists using other types of Whiskey. Canadian Whisky, Irish Whiskey, and Scotch deliver some fantastic Old Fashioned cocktails.

Anyway, the problem with many modern twists isn't the spirit base.

Attempting to push the boundaries of the cocktail to its max, bartenders began adding Absinthe, (blue) Curaçao, Maraschino, and many other liqueurs.

Further garnished with all kinds of fruits like pineapple, cherries, orange, and lemon, those drinks often looked more like a fruit salad than an Old Fashioned.

I really don't like these overly creative takes on such a classic. Thus, our recipe only applies minor changes to the original.

The taste of a Scotch Old Fashioned

Compared to a classic Old Fashioned, the Scotch version is a lot smokier and oakier in taste.

Also, the drink's flavor profile is a bit more complex and mature. 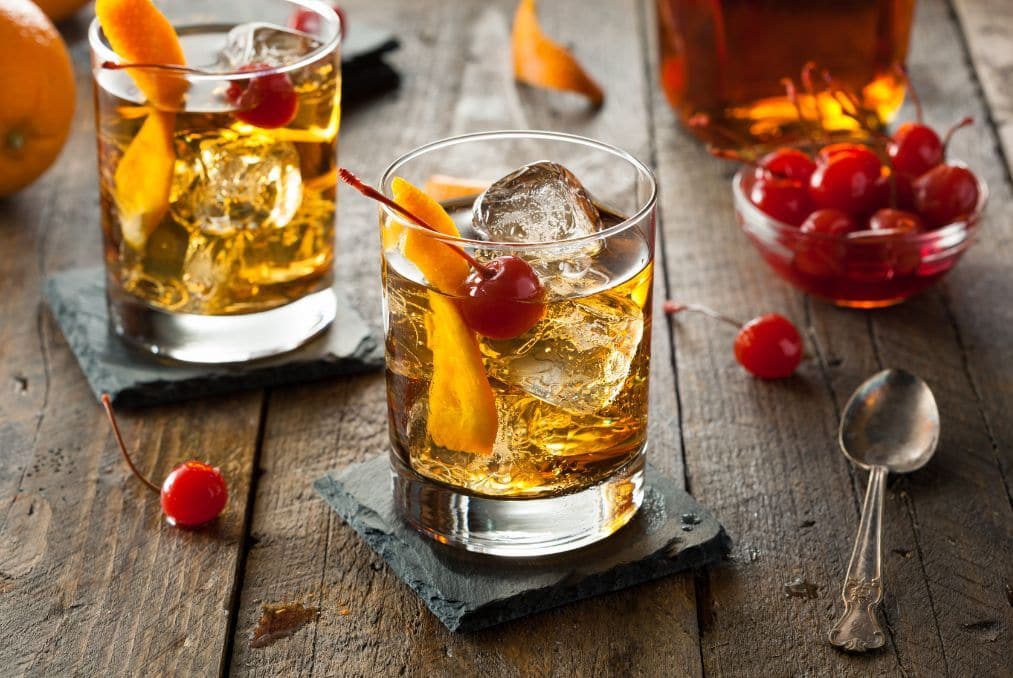