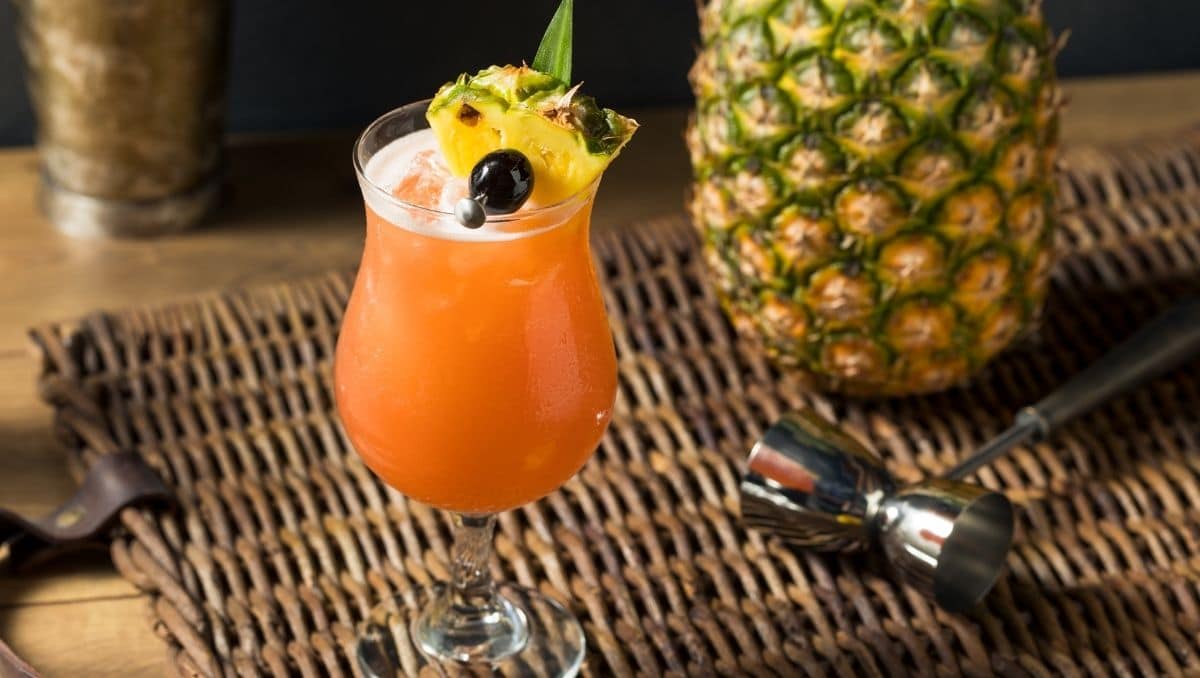 The Singapore Sling is a complex and fruity Gin cocktail with countless variations. We will help you through the jungle of recipes and show you how to make the perfect Singapore Sling.

The Singapore Sling is one of these drinks everybody has heard of, but only a few know how to make it. Hardly surprising considering the long list of ingredients, including Gin, different liqueurs and juices, soda, red wine, and bitters.

The legendary drink likely originated in Singapore's famous Raffles Hotels, where Chinese bartender Ngiam Tong Boon supposedly invented it in 1915 while working at the bar in said hotel.

Even though almost everyone agrees on this story, there are hints that it might now be the entire truth.

The recipe nobody really knows

Until today, the Raffles hotel claims that the first Singapore Sling got shaken at their hotel bar. And many industry leaders agree that Ngiam Tong Boon invented the cocktail over 100 years ago.

Since then, the recipe got published in various cocktail books, each featuring a different version.

You understandably might wonder why this happened. The answer is pretty uneventful: the original recipe got lost. So nobody knows how Ngiam Tong Boon prepared the drink and which ingredients he did use.

Therefore, we now often have a hard time finding two that are the same. But after some testing, I decided on my favorite:

Ingredients for the Singapore Sling

The list of ingredients needed for the Singapore Sling is long. And this is also something all recipes have in common. So, making this iconic drink needs some determination.

All these ingredients are shaken, then filled in a cocktail glass and topped off with chilled soda water. -Don't use a bottle that's been open for days, as it will have lost most of the carbonation and your Singapore Sling falls flat.

History of the Singapore Sling

When looking closely into the history of the Singapore Sling, you come across some different theories.

On searching the Singaporean newspaper archives, David Wondrich found out that the first reference ever of a Sling was in 1897 already. That would have been almost 20 years before the cocktail was shaken at Raffles in 1915.

In 1903, there was another statement, apparently mentioning the drink as "pink slings for pale people." And it does not only state the pink hue the Singapore Sling is famous for but also points out that the drink was made for westerners staying in Singapore.

And another article from 1913 states the typical components of the Sling cocktail. The list of ingredients included: cherry Brandy, D.O.M. Bénédictine, Gin, lime juice, ice, a few drops of cocktail bitters, and water. What's more, it seems that occasionally a red wine float got used for bringing the drink together.

Also, an interesting fact about this drink is that the term "sling" actually derives from the German word schlingen, which means to gulp down.

The Singapore Sling in Raffles Hotel

However, as the Raffles Hotel is widely considered the birthplace of the Singapore Sling, many bars and bartenders took a cue from the recipe that the hotel bar used.

They quickly realized that Long Bar at Raffles has indeed not only one recipe but two:

The first is a more traditional take on the Singapore Sling, named "The Raffles 1915 Gin Sling", and the other more modern variation with the descriptive name "Modern Raffles Singapore Sling."

If you want to try out both variations, you have to stock up on some unconventional supplies. Anyway, here are the ingredients and measurements for both versions served at Long Bar.