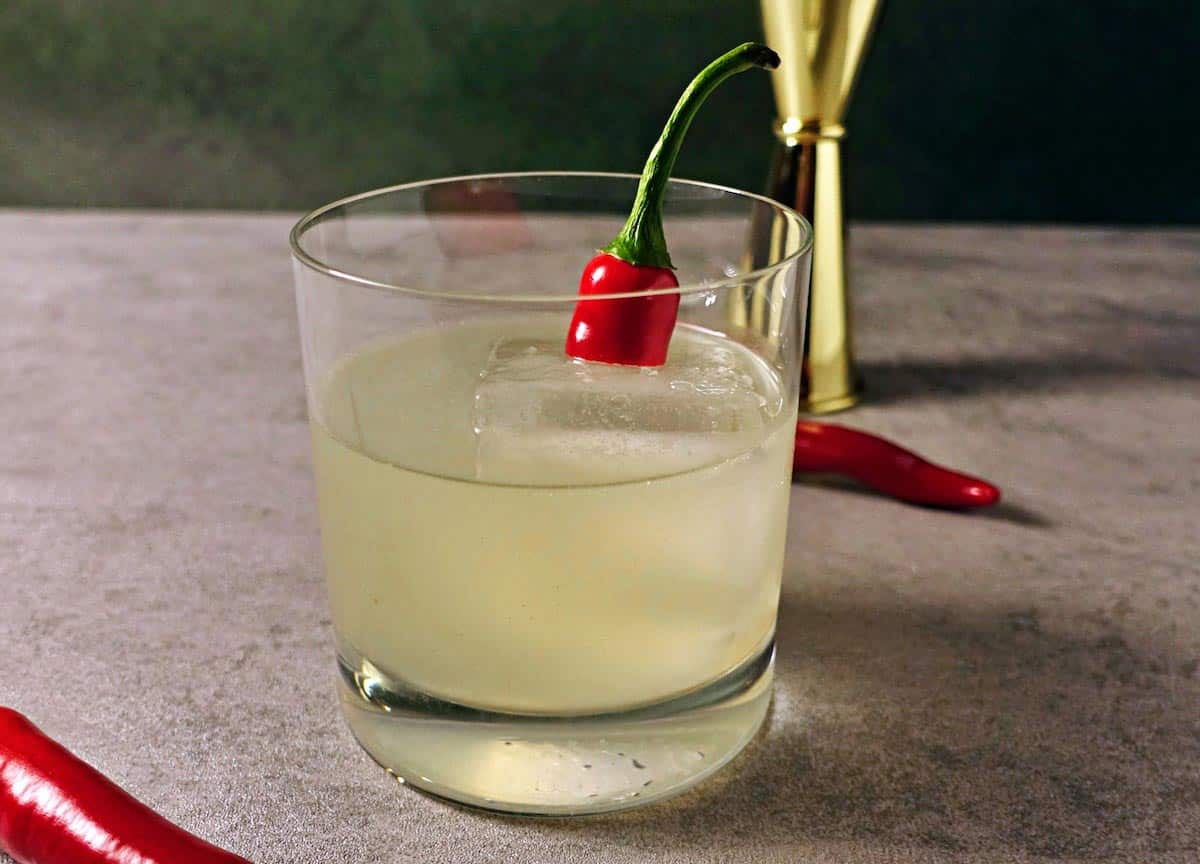 The Soho House Picante de la Casa Cocktail is a spicy Margarita-style drink that packs a punch. And it combines some of the most traditional flavors of Mexico.

The Picante de la Casa Cocktail, also called the Soho House Picante or Soho House Tonic, is a creation of the Soho House Club. That is a group of private members' clubs with its origin in Soho in the Londoner West End.

The cocktail, however, does not have its roots in England but in West Hollywood, USA. -Although, actually, it looks like it could be straight out of Mexico.

Tequila in the Soho House Picante

The ideal type of Tequila for the Picante de la Casa is Reposado.

Reposado means that the spirit was aged for at least 60 days in oak barrels. The maximum aging time for Reposado Tequila is 364 days.

Everything that spends a year or more in the oak barrels is considered Tequila Añejo.

The beauty of Reposado is that they acquired some of the rich characteristics of aged spirits while still being more affordable than an actual Añejo. Perfect for a high-quality mixed drink.

If you look for recommendations, you can never go wrong with Patrón or Herradura.

But in the end, every Tequila you have in your home bar will work as long as it is of decent quality. -Though, make sure it is a 100% agave spirit, not a Mixto.

Follow this link to read more on the different types of Tequila.

Agave syrup, or agave nectar, does a great job of balancing the heat, the tartness, and the alcoholic bite.

Also, it complements the flavors from the Tequila beautifully, as it is also agave-based.

As for the lime juice, the most important thing here is squeezing it from fresh fruit. Pre-bottled short-cuts lead to substandard drinks, and that would be a waste.

If you want to make your life easier, roll the limes with a flat hand on a tabletop before squeezing them. That helps release the juices.

Coriander - or Cilantro- is not everybody's cup of tea. But it works well in Mexican dishes and Mexican-inspired drinks.

So, even if you're not a fan of the aromatic leaves, you surely will like the Picante de la Casa Cocktail. -It's also not the dominant flavor of the cocktail, but it adds some lovely freshness.

By the way, in many countries, cilantro and coriander would be the same thing. -The leaves of the plant.

In the US, however, coriander refers to the seeds. So, to avoid confusion, you need the leaves for the Soho House Picante.

Not all chili is the same. And everybody who has come into closer contact with different species of those hot peppers likely knows that.

The level of heat can vary dramatically and is measured in Scoville (SHU).

For the Picante de la Casa Cocktail, a red jalapeño should be enough. It has moderate heat between 2,500 and 10,000 SHU.

If you can handle a bit more spice, Cayenne pepper is a nice alternative.

The garnish for the Picante de la Casa is pretty straightforward. It's the upper part plus the stem of the chili incorporated in the cocktail.

You will also need a large ice cube to be able to place the chili stem on top.

As for the glassware, an old fashioned glass does have the perfect size for the Soho House Picante. With taller or narrower glasses, you will struggle with the garnish.

Early version of the Picante

The first version of the drink, the Margarita Picante, was created by the former beverage manager at Soho Beach House Miami sometime before 2012.

This version was a lot more complex and time-consuming to make, with ingredients like hot sauce, cucumber juice, and the like.

In 2012, Soho House bartenders and managers met in London to standardize their bar menus, glassware, etc. And they also wanted to pick a signature cocktail.

The recipe for the Soho House Tonic

Long story short, one of the favorite suggestions was the Picante from Miami. It was already a hit in Miami and kept great potential. However, it was too complex to mix it quickly in large quantities.

Also, it should be the signature drink for all Soho Houses worldwide, but the components were not universal and classic enough to work on all continents.

In the end, it was Soho House LA bar manager Chris Ojeda who presented the solution. He cut out most of the fancy stuff and replaced them with just coriander and chili.

It was an immediate success in the US. But despite trying to make it more agreeable in other cultures, it took a while for Europe and Asia to catch on. But they eventually did.

Until today, the Picante de la Casa, by far, remains the most ordered drink at Soho House bars.

If you now have a taste for hot and spicy cocktails, there are more drinks you can mix up with your favorite chili flavor.

Delicious and easy-to-make options are the Spicy Grapefruit Margarita, the Spicy Fifty, and the Michelada, a Mexican refreshment made with beer.

The first uses jalapeño-infused Tequila and chili powder to get those beautiful heat into your drink.

The latter, the Michelada, is a beer-based beverage that gets spiced up with a whole lot of hot sauces and savory ingredients that work incredibly well together.

If you want something more elegant with a more restrained heat, try the Spicy Fifty. It's a beautiful and complex blend of Vanilla Vodka, Elderflower, honey, lime, and chili.