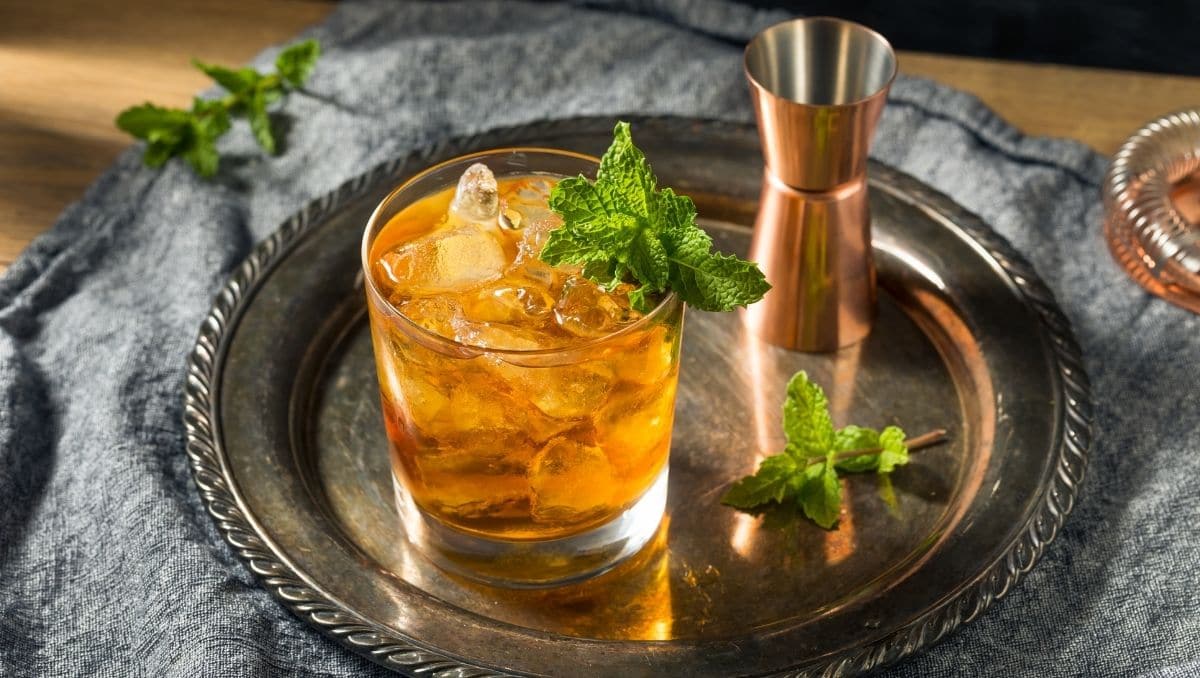 The Stinger is an extravagant and elegant two-ingredient cocktail. A perfect after-dinner drink that is as easy to drink as it is to make.

Made of Cognac and white crème de menthe, the Stinger is a sophisticated representative of Brandy cocktails. The recipe is simple and results in a sweet, strong, and minty drink. It makes for a perfect pairing for a luscious chocolate-based dessert. And opposed to the Grasshopper, another after-dinner drink made of crème de menthe, the mint notes are far more restrained. They are just enough to add a fresh kick to the cocktail.

Most likely, the Stinger derived from The Judge cocktail, a mix of Brandy and regular crème de menthe. And it soon became a drink that had an immense impact on society and was long viewed as an upper-class cocktail. And indeed, the cocktail commonly got served in the high-society. But that might be related to the origin of the cocktail.

History of the Stinger cocktail

Jacques Straub was the first to publish the recipe in written form in his book "Drinks." Back then, it seemed like an interpretation of the Judge cocktail, published about 22 years earlier. The Judge was part of William Schmidt's book called the Flowing Bowl. Its recipe consisted of Brandy, crème de menthe, and a bit of simple syrup for balance.

The Judge cocktail was an instant success, at least in the high-society of New York City. And part of this society were the Vanderbilts, an American family originating from the Netherlands who built their empire on shipping and railroad business. Reginald Claypoole Vanderbilt was a child of Cornelius Vanderbilt - the richest American until his death in 1877. And also, Reginald was a keen cocktail maker living in a mansion on 5th Avenue in NYC.

Reginald even had a full-grown bar in his mansion where he experimented and mixed cocktails for him and his guests. For instance, cocktail historian and author David Wondrich once recounted a newspaper from 1923 crediting "Reggie" Vanderbilt with the invention of a drink called Stinger. So, having Reginald Vanderbilt credited as its official explains the upper-class status of the cocktail.

The drink also starred in classy Hollywood productions like the film "High Society". It is a movie from 1956 with Bing Crosby and Frank Sinatra. Also, secret agent James Bond drinks a Stinger it in "Diamonds are forever". But, over time, the love for the flavorful two-ingredient cocktail faded. And after the 1970s, the drink became more and more forgotten. Until today it still is a rather rare find in cocktail bars around the world.

One question that often comes up when discussing the Stinger is how it is supposed to be prepared. That is because, typically, spirits-only drinks are stirred and not shaken. However, in this case, it is different. Traditionally a Stinger is shaken on ice and then strained into a chilled coupe glass (without ice).

But nowadays you can also find other ways to prepare the drink. Stirred on ice in a mixing glass and then strained into a glass filled with crushed ice is a common alternative. That way, the cocktail remains cooler and tastes even more refreshing.