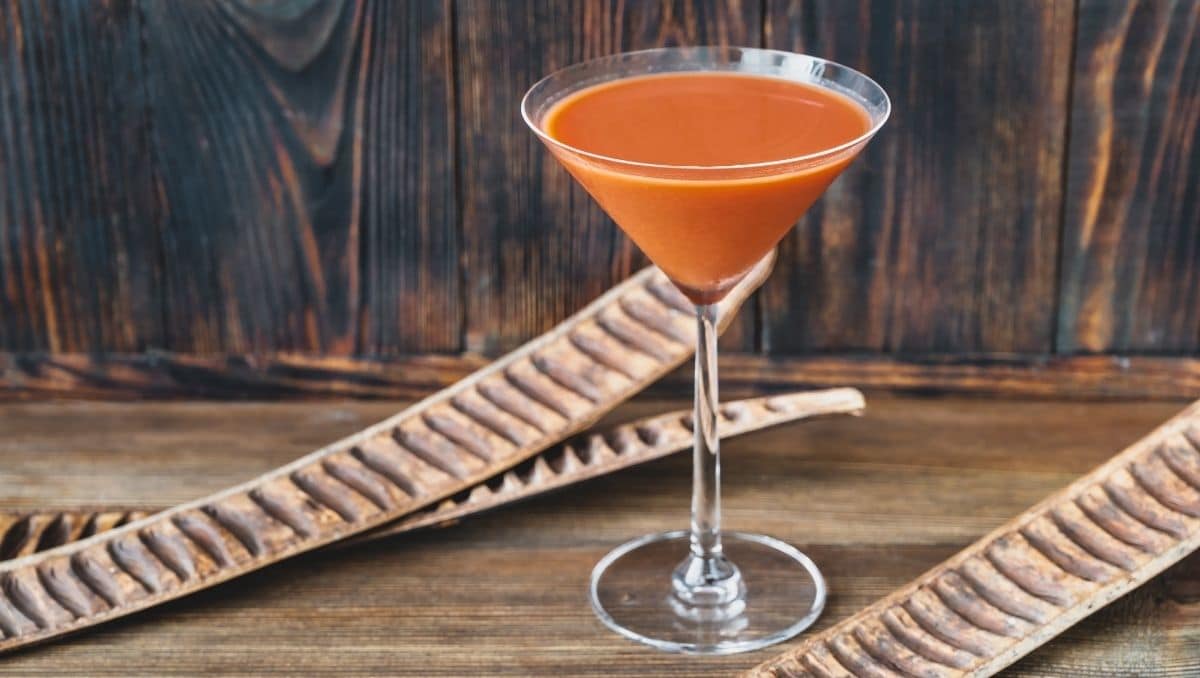 Trinidad Sour - A cocktail based on Angostura bitters

The Trinidad Sour is one of the most unique and extraordinary cocktails. Deep red-brown in color, it is not based on a regular spirit but on Angostura bitters instead.

There are many cocktails that are special and not to everyone's liking. A famous example is the Bloody Mary, the tomato cocktail only a few dare to order. But the Trinidad Sour might polarize even more than this classic.

The recipe calls for one and a half ounces of Angostura bitters as a base. And it can be accused of many things but certainly not of a lack in flavor.

If you've had Angostura bitters in a drink before, you might know that only a few drops can drastically deepen the flavor profiles of cocktails.

Famously used on an Old Fashioned or Manhattan, the cocktail bitters bring bursts of flavor to your drinks.

Now imagine not using a few drops but 4.5cl of it. The flavors are insanely intense, and all the other ingredients are more about calming the bitters down. Every element is necessary for balancing that cocktail.

And surprisingly enough, the result is unique but actually enjoyable. Not for everyone, of course, but there are definitely some that can indulge in this cocktail-bitter madness.

The history of the Trinidad Sour

The Trinidad Sour got invented in 2009. Back then, Giuseppe Gonzales, bartender at New York's famous Clover Club bar (named after the Clover Club cocktail), created this flavor bomb of a cocktail.

But his idea wasn't entirely new at this time. In fact, the recipe was inspired by another cocktail - The Trinidad Especial.

The inventor of the Trinidad Especial is Valentino Bolognese. He is a renowned Italian Bartender from Palmoli, a small town in the region of Abruzzo.

In 2008 he decided to participate in the "Angostura European Cocktail Competition". His two contributions were the aforementioned Trinidad Especial and RI.PA. Deuxième.

The recipe of the Trinidad Especial also relies heavily on Angostura, which is balanced by lime juice, orgeat syrup, and a touch of Italian Pisco.

As you might have already guessed, Bolognese won the competition. That not only made him and his Trinidad Especial cocktail famous, but it also laid the ground for the Trinidad Sour.

Gonzales took the winning cocktail and transformed it into a Sour Cocktail based on Angostura.

He increased the amount of Angostura, kept the orgeat to sweeten the drink, but replaced Pisco and lime juice with a more complex mix of Rye Whiskey and lemon juice.

The Ingredients of the Trinidad Sour

The key ingredient should be evident by now: Angostura bitters - unique in taste and irreplaceable in the Trinidad Sour recipe.

The aromatic bitters are complemented by Rye Whiskey, orgeat, and lemon juice.

Rye Whiskey is used to add a bit more structure to the drink. Half an ounce is just enough to support the rich, aromatic flavors without distracting from them.

A solid Rye Whiskey you would use for making your occasional Manhattan will do the trick here, too. It doesn't have to be a top-shelf one because the flavors are dominated by cocktail bitters anyway.

Orgeat is the sweetening ingredient of the Trinidad Sour cocktail. It is a syrup made of almonds, sugar, and rose water. A mix that is difficult to find but is more and more used in cocktails.

Egg white in the Trinidad Sour

There are not many viable variations on this cocktail recipe. But adding an egg white to create a silky texture and an additional foam on top of the drink is widely accepted.

If you decide to shake up your Trinidad Sour with an egg white, make sure to dry shake your drink first.

By doing that, the egg white will emulsify much quicker and better, creating a thicker foam for your drink.

If you've never done a dry shake before, here's what you should do:

Add the ingredients plus egg white to your cocktail shaker. But don't add ice yet. Shake the mix for 10-15 seconds without ice. That's your dry shake.

Now open the shaker, add your ice, and shake again. -This time, to chill your drink.

That's it already. And a perfect egg white foam will be your reward.

In case you want to know more about why you should do that, read our post about dry-shaking and reverse-dry shaking cocktails.

2 comments on “Trinidad Sour - A cocktail based on Angostura bitters”