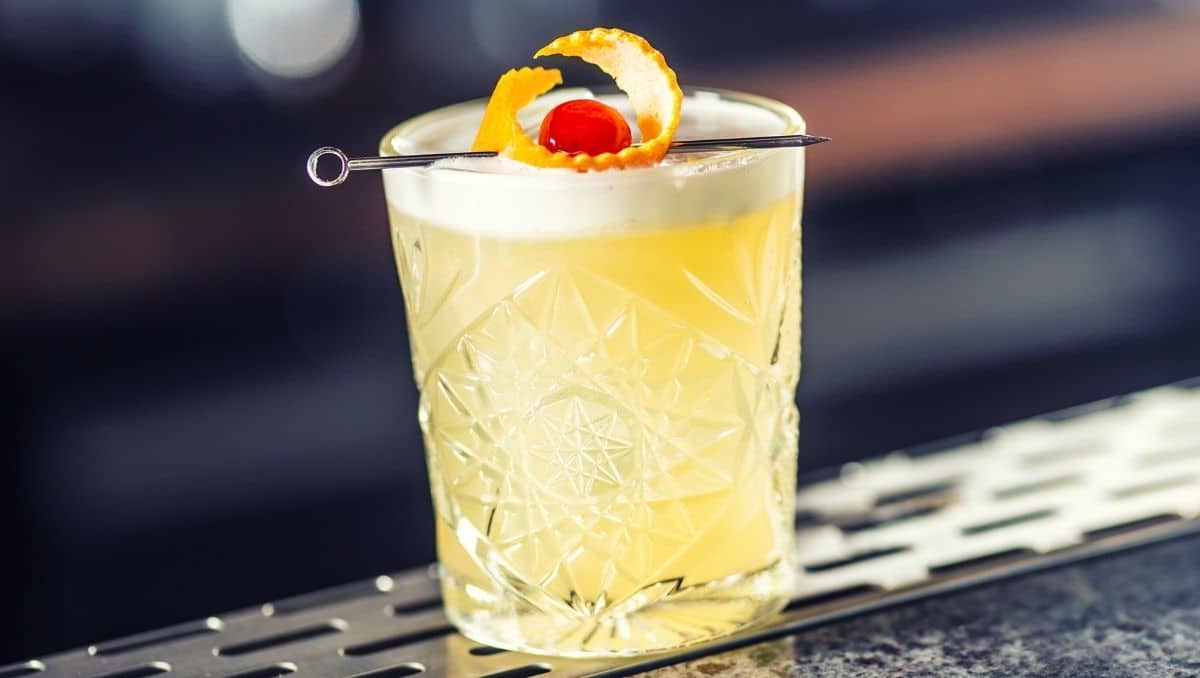 A perfect Whiskey Sour has just the right balance between sour and sweet. It is just enough simple syrup to counteract the zing from fresh lemon juice. But the most important is to choose the best Whiskey for a Whiskey Sour.

The Whiskey Sour is a classic from the Sour Cocktails category, also often called "Sours".

They all share the same basic template: A spirit base mixed with fresh lemon or lime juice and simple syrup. Some variations also include egg white or a dash or two of cocktail bitters.

The beauty of such a classic cocktail is that you can easily tailor it to your personal taste.

With a Whiskey Sour, you can start by choosing a base of either Bourbon or Rye. Then you can also use egg white or aquafaba - or skip the foamy element altogether.

Another option is to add aromatic bitters. And finally, you can serve your drink on the rocks or without ice in a chilled glass only.

You see, there are countless options to tweak this drink and make it your own.

Most people are very opinionated about the egg white and the ice. But also, the Whiskey base often is up for discussion.

It's vital to pick the best Whiskey for your cocktail to make sure it lives up to your expectations.

While some like a sweet Bourbon, others prefer a traditional Rye Whiskey. And, of course, Scotch advocates favor a peated Whisky from Scotland in their ideal Whiskey Sour.

The selection is enormous. Besides choosing a suitable style of Whiskey, naturally, you also have to decide on the brand.

So, if you find the countless options overwhelming, here's the list of the best Whiskey for making Whiskey Sour cocktails.

The best Whiskeys for a Whiskey Sour

Choosing between countless options of Whiskey is not an easy job to do. Even more so, if you are not much of a Whiskey drinker.

Do you prefer the spicy notes of a good Rye Whiskey? Or would you favor a sweeter and more vanilla-forward serving of Bourbon?

Maybe you're a fan of the smoky taste of peated Scotch Whisky. No matter what your preference is, look no further.

Here's our bartender-approved list of the best Whiskey brands to use in a Whiskey Sour.

Most classic Whiskey Sour recipes use Bourbon. And, of course, you will find some hand-picked Bourbon options on our list.

For instance, Woodford's Reserve Bourbon seems like a perfect fit. This Bourbon is so smooth and rich that it works perfectly in many cocktails.

The taste is pretty mild and not too overpowering. That makes it a perfect base for an elegant and perfectly-balanced Whiskey Sour.

Woodford Reserve is a standard medium-bodied Whiskey with vanilla and honey notes.

When sipped neat, it might come across as a bit bland. Yet, it is that mildness that complements the other components so well.

Its sweet notes match perfectly with the acidity of lemon juice and create a rich and tasty cocktail.

Elijah Craig Small Batch Bourbon is another Bourbon on our list but with a very different approach.

In contrast to the mild and balanced Woodford Reserve, this Bourbon is rich with pepper and spice notes.

Elijah Craig is bottled at 47% ABV and has an excellent balance of flavors and aromas. The bold flavor profile ensures you can still taste the base spirit even when used in a Whiskey Sour cocktail.

This high-proof Bourbon also has the typical sweetness of the corn-spirit. In fact, the balance here is so good that you wouldn't realize that this base is 94 proof.

I recommend using an egg white when opting for this Whiskey as your base spirit. That will help balance the different flavors by adding creaminess to your cocktail.

Eagle Rare Bourbon is distilled at the Buffalo Trace Distillery. The name might ring a bell with Bourbon lovers because Buffalo Trace produces some of the most-loved Bourbons, such as Blanton's.

Eagle Rare itself is super smooth and carefully crafted. When drunk neat, you can detect flavors like coffee, leather, and underlying notes of oak.

Eagle Rare is perfect for a Whiskey Sour as it combines the strengths of the above two Bourbons.

It is mild, well-balanced, and mixes perfectly with lemon juice and syrup. But it's also strong enough in taste to cut through the acidity of the lemon and stand out.

Bulleit is most known for Bourbon, produced at their facilities in Kentucky. However, Bulleit Rye Whiskey makes for an excellent Whiskey Sour and deserves a place on this list.

And despite being a sourced product, Bulleit Rye Whiskey is a beautiful spirit that works great in cocktails.

Aged for a minimum of five years, Bulleit Rye carries hints of vanilla, citrus, and oak. It is a milder and sweeter take on a Rye Whiskey, making it approachable to non-Rye drinkers.

When used in a Sour Cocktail, Bulleit Rye is right between a Bourbon and a traditional Rye.

Give this unusual base spirit a try, and you'll be surprised by its compatibility with cocktails. -Maybe tune down a bit in syrup as this spirit is somewhat on the sweet side.

These days, Rittenhouse Rye is produced by Heaven Hill. -The company that is responsible for Elijah Craig Bourbon and Evan Williams.

Despite its low price point, Rittenhouse is a favorite among Rye lovers. The high ABV combined with this signature spice makes Rittenhouse one of the best Rye options for a Whiskey Sour.

Its intense notes of caramel and cocoa blend well with spices like cinnamon, vanilla, and nutmeg. Also, the strength and spice let you still taste the Rye, even when mixed with lemon juice and syrup.

Rittenhouse Rye is a beautiful choice for anyone who loves their Whiskey Sour on the dry side.

Wild Turkey 101 is another high-ABV Rye coming from Kentucky. And just like Rittenhouse, Wild Turkey is a spicy representative of its kind - even a bit spicier than Rittenhouse.

The taste of Wild Turkey 101 is bold with pronounced notes of Rye and spices. The hint of smoke and an overall warmth tame the bite of this brave Rye Whiskey.

In a Whiskey Sour, the spiciness of this Rye stands up strong against the acidic lemon juice and sweet sugar syrup. The result is a smooth and distinct cocktail with quite a bite.

It is not the perfect choice if you usually prefer and only drink Bourbon, but a fantastic option for experimenting a bit.

Nikka is one of the most influential Whisky producers in Japan. (Like Scotch and Canadian Whisky, it is spelled without the e - read more on this here).

Nikka has a long tradition of producing exquisite Whiskey. For example, Nikka Coffey Grain, Nikka Yoichi Single Malt, and Nikka From the Barrel.

And Nikka Days also knows how to impress discerned Whiskey drinkers. The Whisky has a bright, floral, and fruity flavor profile combined with a surprisingly high amount of smoke.

Nikka Days is a smooth and creamy spirit, perfect for sipping neat or on the rocks. And when used in cocktails, it shows its full potential.

For all fans of smoky Scotch Sours, Nikka is an excellent base. -Even though it's not from Scotland.

Talisker 10 years is a Single Malt distilled by the oldest distillery on the Isle of Skye, producing maritime and powerful Single Malt Scotch Whisky since 1830.

Every sip you take immediately takes you to this remote island. Already in the nose, you can smell the saltiness from the sea.

But as unusual as the choice of Talisker 10 might sound, it is a brilliant choice for a Whisky Sour.

Dewar's is the most awarded blended Scotch Whisky in the world. It won more than 500 awards, way more than any other.

And Dewar's 12 Year Old Blended Scotch Whisky is double-aged to ensure an extra smooth consistency. Such a level of dedication does not go unnoticed, and hence got recognized by the British royal family.

Since 1893, Dewar's has been the royal purveyor of Whiskey to the court without any interruption.

For a Scotch, Dewar's 12 is relatively light on smoke. Some smoky peat flavor is still present but only slightly. Instead, the taste is a little sweet and floral, with a hint of toasted barley and almonds.

If you want to start experimenting with Scotch in your Whiskey Sour, Dewar's 12 is a great option.

Lagavulin 16 is a beautiful Islay Scotch for many. Yes, it is an absolute smoke bomb. And indeed, the flavors are very intense and concentrated. When drinking it neat, you get bold peaty smokiness combined with notes of malt and Sherry.

But even though cocktails recipes rarely call for Lagavulin rarely, it works a treat in a Whiskey Sour if you generally like smoky drinks.

To optimally mix a Whisky Sour with Lagavulin 16, best use a split-base approach. That means half of the Whiskey part should be Lagavulin, the other half another Whiskey. I recommend Dewar's 12 as it's also Scotch but far less smoky.

Then, use maple syrup instead of regular simple syrup, an egg white, and two dashes of Angostura bitters.

The result is an intriguing and complex Whisky Sour. It's unlike any Sour Cocktail you tried before.

Teeling is a young, up-and-coming Whiskey brand from Dublin, Ireland. It is also currently one of my favorite Whiskeys from the Green Island.

Teeling Small Batch is aged in Rum casks and is famous for its unusual fruity flavors: apples, cherries, oranges, apple pie, chocolate, and hints of fresh-cut grass make this Whiskey so unique.

The Whiskey is a blend made of various Whiskeys that have been aged up to six years. Grain and Malt Whiskeys age separately in former Bourbon barrels and then are blended and age again in American Rum casks for a whole year.

When used in a Whiskey Sour, Teeling brings in a lot of fruity flavors that are atypical for a standard Whiskey Sour.

This one is an insider tip for everyone who wants to try something new and is not into smoky Whiskey.

Jameson is one of the most famous Irish Whiskey brands. Their Whiskey is made from unmalted and malted barley. And after distillation, the Whiskey matures in former Sherry and Bourbon barrels.

Jameson has a really unique smell with sweet notes of caramel, fruity nuances of apple and vanilla, and wooden notes.

While sweet aromas of vanilla, nuts, and caramel dominate the taste, one can also detect sherry nuances.

Jameson's mild and sweet taste makes it the ideal base for a Whiskey Sour. And because it is so smooth, you can increase the Whiskey ratio slightly.

On a final note

No matter if you prefer a rather classic Whiskey Sour based on a quality Bourbon, a spicy Rye-based version, or a smoky Scotch Sour. There are plenty of options to choose from. Let me know in the comments which one is your favorite.

Now get your cocktail shaker and mix some delicious Whiskey Sour cocktails. Cheers!