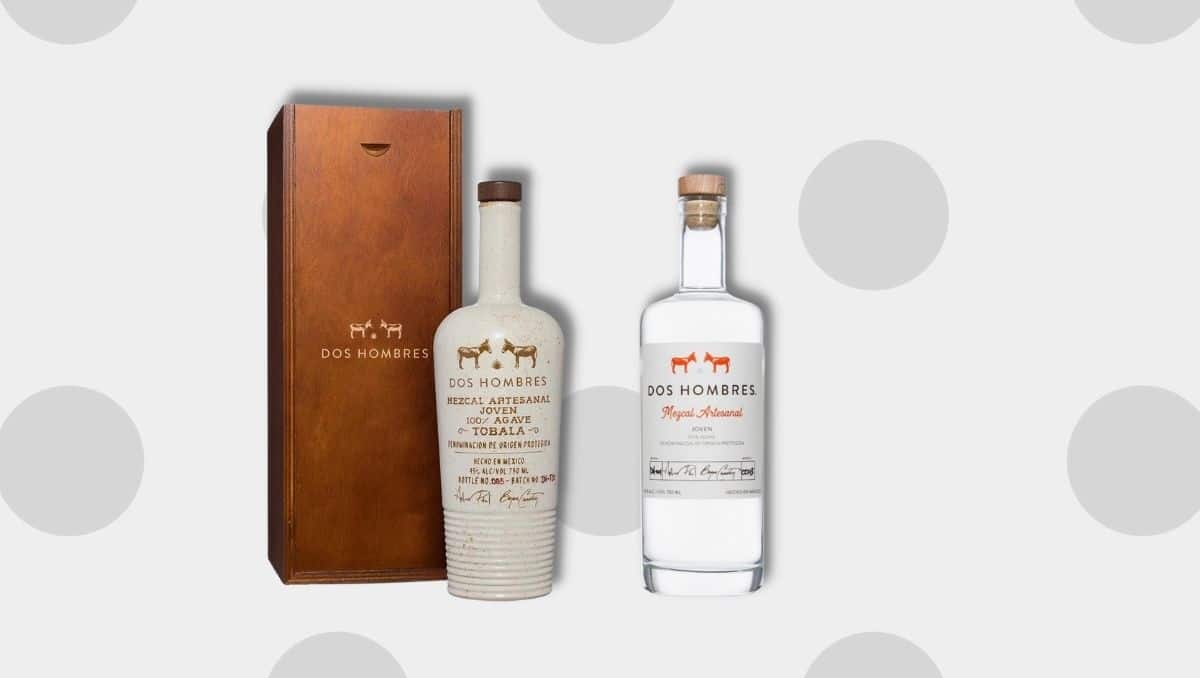 When Dos Hombres started selling their Mezcal, they solely offered a single product. A Joven Espadin Tequila made of agave plants from San Luis del Rio in Oaxaca. In December 2020, only about a year later, they extended their lineup with a premium Tobala Mezcal. But as with many celebrity releases, people are skeptical about Dos Hombres Mezcal. Is it just another overpriced Mezcal on the market? Or have Cranston and Paul, better known as Walter White and Jesse Pinkman, created something that could establish itself on the market, even without celebrity support?

The Breaking Bad duo has set themselves the goal of creating an excellent Mezcal. Therefore, the production process is strictly traditional. The result is a 100% agave Mezcal made of the finest Espadin agave. So I want to look a little closer at the production method and see if Dos Hombres Mezcal is any good after all.

Dos Hombres Mezcal is made in a small village called San Luis del Rio, located in quite a remote section of Oaxaca. The man responsible for the actual spirit is Gregorio Velasco Luis. Gregorio is a third-generation Mezcalero who also produced Mezcals for renowned brands like Pierde Almas.

As mentioned, his production process for Dos Hombres is very traditional. But what exactly does that mean? The first Dos Hombres release was an Espadin Mezcal -meaning, the type of agave used for production is Espadin agave. Those agave plants have to grow for at least six years before it's time for harvesting.

After harvesting, the agave piñas are quartered and cooked in earthen pits. This step brings out their natural sugars. And also, the milling process is traditional: In a round hole, a stone wheel called "Tahona" gets pulled by a donkey.

This mashed agave is now mixed with spring water and fermented for 7 to 10 days. That takes place in large wooden barrels. The result of this process is called "Tepache". Tepache is the base for the distillation process. Then, loaded in copper stills, the mixture is heated to obtain the final Mezcal.

Enough background information. Let's get to the good part. I want to talk about both Dos Hombres Mezcals and have a closer look at the two Mezcals. And that much I can tell you already, opinions are divided.

Dos Hombres Espadin is certainly not a bad Mezcal. It's smooth and does have all the basics an Espadin Tequila needs. So there is plenty of smoke, citrusy flavors, and some fruity notes. But due to the relatively low proof, the Espadin Mezcal tastes slightly diluted. That is a chief cause for criticism, mainly because of the high price tag of $60.

The nose is sweet and smoky with notes of alcohol. When sipping, you are greeted with more smoke, some citrus, fruity, and even floral notes. Some also detect notes of Mango. Apart from the high price of this Mezcal, it's a recommendable entry-level Mezcal. It can be sipped, though I suggest using it in Mezcal cocktails.

The Dos Hombres Tobala is a limited edition released in December 2020. At $349 per bottle, it's a pretty expensive Mezcal. But I want to remember how much time and effort went into such a product. The Tobala agave plants used in this Mezcal are more than 25 years old, some even close to thirty years.

The nose is soft and sweet, with a unique character. The taste is complex with notes of cooked agave, chocolate, dried fruits, dried herbs, and a slightly lactic flavor. Overall, a very pleasant Mezcal at a very high price point. It's hard to judge the fair market value as you certainly pay extra for branding and limited availability. But if you're alright with that, Dos Hombres Tobala is a worthy addition to your Mezcal shelf. Especially for a Breaking Bad fan.

Particularly the Espadin Mezcal works great in Mezcal cocktails. In combination with other spirits, liqueurs, and fresh ingredients, you'll get smokey drinks with that typical Mezcal punch. Try out the unique Dos Hombres Mezcal recipes below at your next friends or family gathering.

Mezcal and Amaro are a fantastic fit. And this Oaxacan Coffee cocktail is just another proof for that claim. I recommend using an Amaro Montenegro or Amaro Nonino with this one.

The Dos Fashioned is an elegant twist on an Old Fashioned cocktail. Balanced and flavored with bitters and maple syrup, this drink is a beautiful alternative to the classic.

A simple yet delicious riff on a classic sour cocktail. If you want to elevate this basic recipe, try our Mezcal Sour and use Dos Hombres Espadin as the base spirit.

How much is Dos Hombres Mezcal?

Dos Hombres Espadin Mezcal sells for $60 per bottle. The limited edition Tobala Mezcal is $349 per bottle and comes in a special packaging.

Yes, Dos Hombres Mezcal is a good Mezcal but it's slightly over-priced. It's made of 100% agave and produced by a third-generation Master Mezcalero using quality ingredients and traditional processes.

Dos Hombres Mezcal was co-founded in 2019 by Bryan Cranston and Aaron Paul, better known as Walter White and Jesse Pinkman from the cult series Breaking Bad.