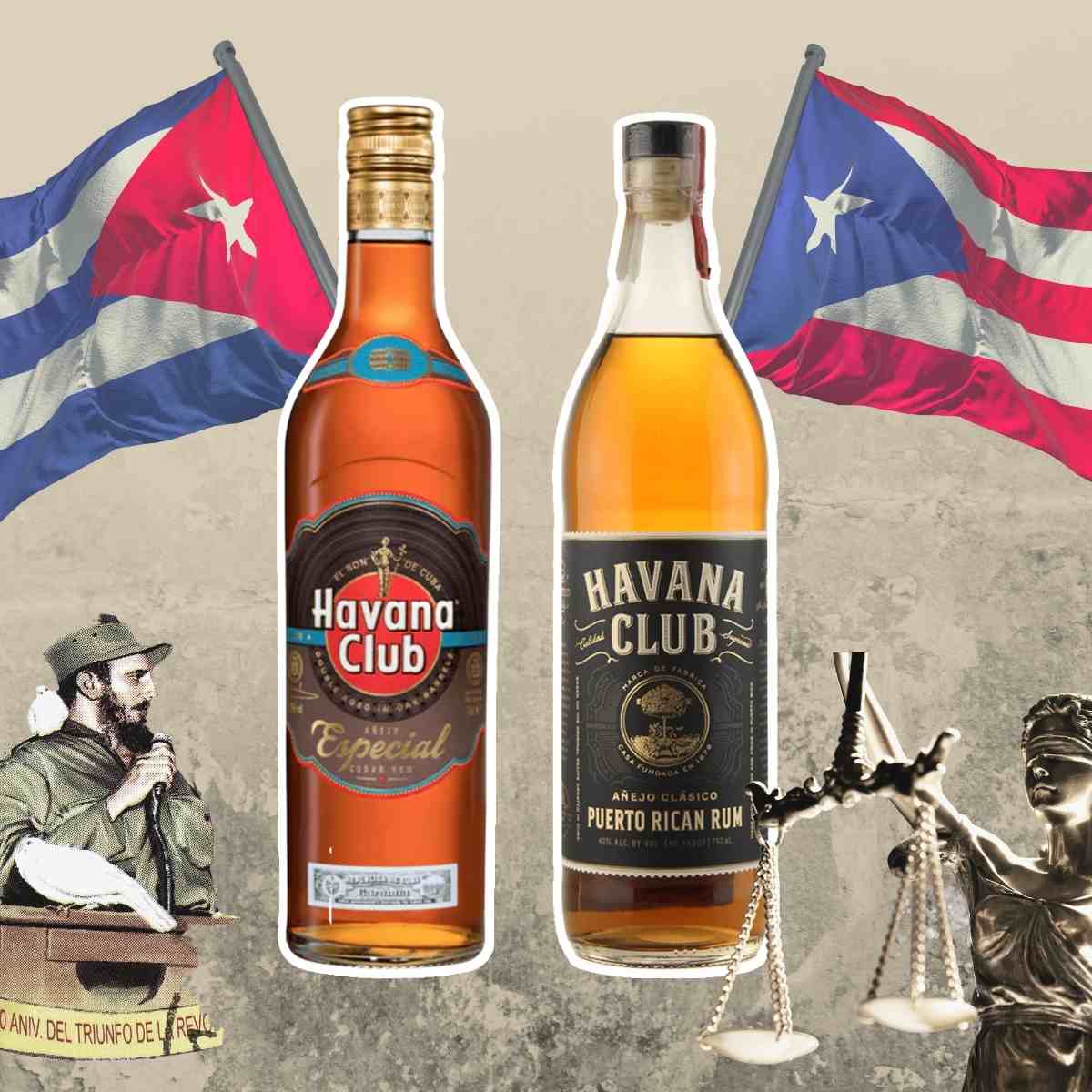 Is Havana Club Rum from Cuba the same as the one from Puerto Rico? And how did it come about that there are two Rums with the same name in the first place? Find all the answers here.

Depending on which part of the world you live in, you might be either familiar with Havana Club Rum from Cuba or Havana Club from Puerto Rico. Most do only know either one or the other. But more and more people stumble upon the fact that there seem to be two products under the same name.

It's true. These two Rums are similar and have a shared past, yet, not the same. So is one merely a shameless copy? Here's the captivating story behind those two brands with all the struggle, passion, fight, and glory.

As the name suggests, the original Havana Club Rum has its roots in Cuba. This certainly implies that Cuban Havana also is the original. But, you might have guessed it, it's not that straightforward.

The whole story begins in Spain: The Basque immigrant José Arechabala Aldama traveled to Cuba when he was 15 in the hope of finding better job opportunities for himself on the Caribbean Island.

He landed on the island in 1862. There, he started working for a distant relative involved in sugar production in Cárdenas, a city some 100miles east of Havana.

Sixteen years later, in 1878, he founded his distillery, La Vizcaya. He successfully produced Rum and other spirits until he died in 1923, aged 75.

After José's passed away, the company (meanwhile rebranded to José Arechabala S.A.) remained within the Arechabala family. However, it was more and more suffering from the blow prohibition in America brought onto them in 1920.

As bad luck would have it, just when prohibition was about to be ended in 1933, a Category 5 hurricane hit the town of Cárdenas, destroying a big part of the distillery.

Yet, the Arechabala family wouldn't let this defeat them. They built a new Rum production plant, inaugurated with the single objective of producing Havana Club and Doubloon Rum. Two brands targeted at the American market.

And not giving up soon paid off: less than a year later, Arechabala Havana Club became the international gold standard for Cuban Rum. Even a new office was opened in Havana, opposite the cathedral, which attracted countless tourists at the time.

Now, what a beautiful happy ending it could have been. But life usually isn't that easy, and the real trouble was just about to begin.

During the 40s and 50s, the business continued to expand. Under the guidance of chairwoman Carmela Arechabala, the facilities grew bigger and bigger. At the height, they could handle fermenting up to 4.000.000 liters and solera-aging 2.000.000 liters of Rum.

In 1953, right before the start of the Cuban revolution, led by Fidel Castro, they celebrated the enterprise's 75th birthday with a 10-year aged Rum, Arechabala 75, the epitome of quality Rum from Cuba.

When the Cuban revolution ended in January 1959, many businesses that could be tied to the rebels in any way were destroyed by the revolutionists. José Arechabala S.A among them in December 1959.

A group of armed men pushed their way into the head office on December 31st while most of the family was spending the holidays abroad. They occupied the facilities, chased everyone out at gunpoint, and forced them to flee the country. Everyone not fast enough ended up in prison.

New year's Eve 1959 allegedly was the last day a member of the Arechabala family set foot into their Havana Club facilities in Cuba. Within a few months, the work of more than 80 years was wiped out. The production plant was abandoned, the barrels were thrown out or given away, and everything lay in ruins.

Bacardi, another famous Cuban Rum brand with an equally long history as Havana, was also attacked and the family members cast out of Cuba in 1960, their facilities nationalized without compensation.

The Bacardi family, however, had wisely already established production plants outside of Cuba in the years prior to the revolution. They had moved their trademarks, assets, and formulas to the Bahamas and had built distilleries in Puerto Rico and Mexico. So, the company was able to survive.

Decades later, in 1994, Bacardi managed to obtain the original recipe of Cuban Havana Club from the Arechabala family and started to produce Rum with the label Havana Club again. But not for long because the Cuban government had its own plans with the Rum.

What happened between 1959 and 1994 was that, with Arechabala's lawyer in prison, the Havana Club trademark in the U.S. expired in 1973. The Cuban government took that chance and re-registered in 1976.

First, they didn't do much with it, but in 1993 they established the state-run cooperation Cuba Ron S.A and started a joint venture (Havana Club International S.A.) with the French brand Pernod Ricard. They began producing and distributing Cuban Havana Club that same year. - One year prior to Bacardi.

As you can imagine, neither the Cuban government nor Pernod was willing to let the move by Bacardi pass, and they successfully sued them in 1996. Yet, Bacardi would not give in that easily.

They appealed, lost again, and appealed once more. This time, after heavy lobbying, they won. Congress passed the so-called Bacardi Act, protecting brand names of enterprised forced to flee Cuba in the aftermath of the revolution.

Another round of litigation followed in 2009, with Bacardi again stepping out as the victor in 2012. However, in 2016, with the tensions between Cuba and the United States easing, the Cuban Havana Club was issued a trademark again, which Bacardi appealed in 2017.

As of today, this legal battle still continues, and it probably will for years to come. At this point, Pernod and the Cuban Government seem to be the clear winner, though.

In numbers, this means Cuban Havana Club is the world's fifth-largest Rum brand and sold in over 120 countries. On the other hand, Bacardi's Puerto Rican Havana Club is only distributed within the United States.

Which one is the original?

The question remains: Is Havana Club from Cuba the original, or is it Havana Club Rum from Puerto Rico? The answer pretty much depends on the way you look at it.

The name Havana surely indicates that it should be a product made in Cuba. So naming a Puerto Rican Rum Havana can clearly be perceived as misleading.

On the other hand, making Sushi in France does not take away from its Japanese origins. And so does the Puerto Rican Havana Rum still have original Cuban roots. The recipe is, according to Bacardi, the Cuban original, even though the production plant is not within the country.

Of course, Sushi from France cannot be labeled as made in Japan, but I think you get my point. From an ethical point of view, it does not feel right to honor a business forcefully taken from its rightful owners.

Some like to compare the two Rums based on drinking them neatly. But, frankly, if you're talking about their standard expression, neither is what I would enjoy drinking neat.

It is about mixing cocktails, and here -to me- the Havana Club el Ron de Cuba version is slightly ahead of Havana Club Puerto Rican. The Blancos are pretty equal to me, but when looking at their aged expressions (Añejo Especial (Pernod) vs. Añejo Clásico (Bacardi), I prefer the Cuban version.

Yet, overall, they are pretty much on par, though. And both brands are perfectly suited for mixing many of our favorite Rum Cocktails.

Ultimately you rarely can choose because, depending on your location, you can usually only get one version anyway:

In the U.S., Puerto Rican otherwise el Ron de Cuba. The embargo against Cuba (JFK announced it in early 1962) is maintained to this day, and you can only get Cuban Rum to the U.S. as a souvenir.

The story of Havana Club is complicated, for sure. The battle has long moved on from families that suffered wrong-doing that should be rightened to two globally immensely successful enterprises locking horns with each other.

Ultimately, you have to make up your own mind. But now, at least, you know the facts required to do just that.