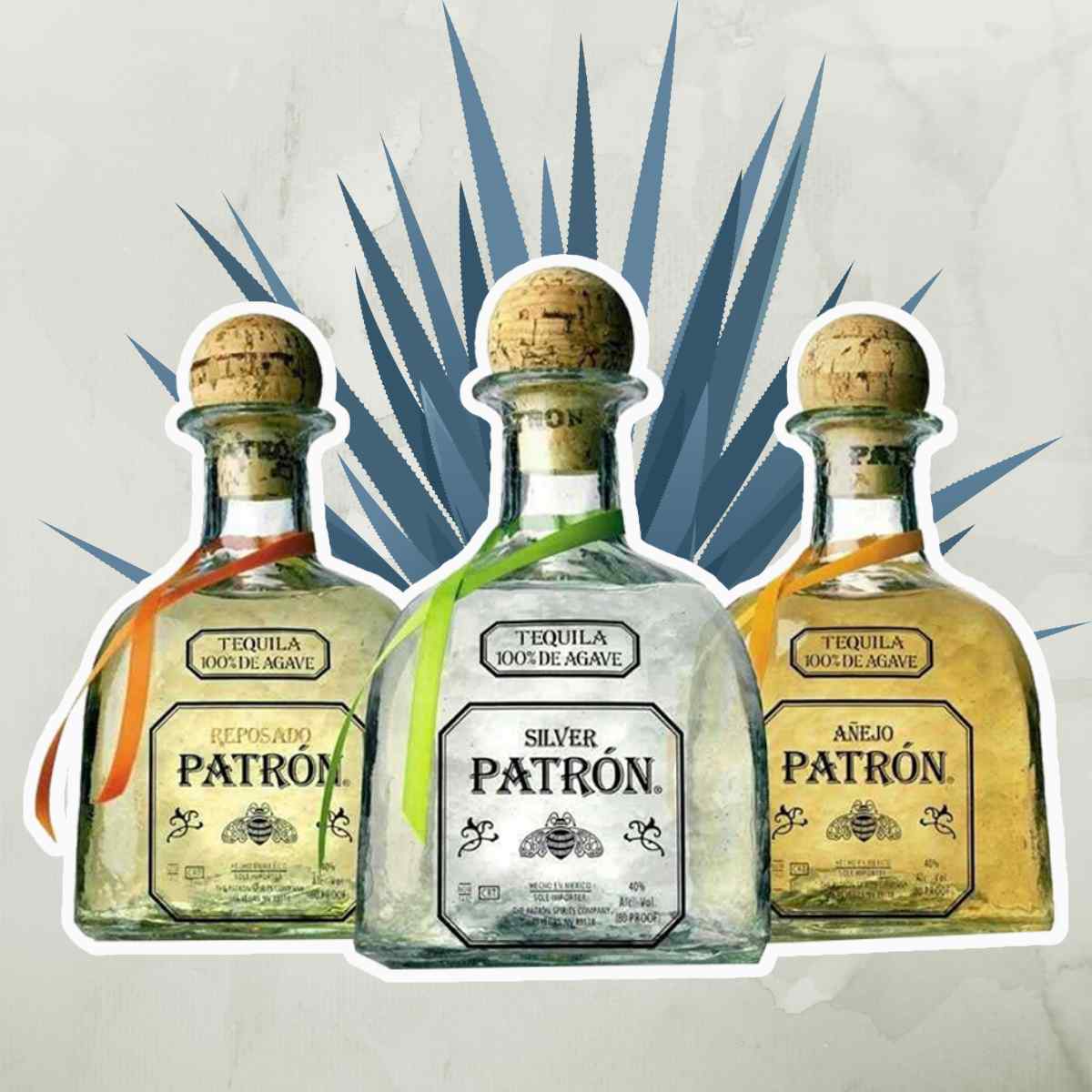 A Guide to Patrón Tequila

Patrón Tequila is one of the most popular Tequila brands in the world. The Tequila is produced and sold by the Patrón Spirits Company.

Patrón produces one of the finest Ultra-Premium Tequilas on the market. Currently, their product portfolio counts more than 35 different expressions of the popular agave spirit. Many of them are rare, long-aged, limited-edition Tequilas.

But the brand is not only famous for the Tequila alone. The iconic hand-blown bottles are just as popular.

What is Patrón Tequila?

Patrón literally translates to "boss". That already indicates what the founders had in mind when launching the brand. Today, Patrón is a leading Tequila brand known for its premium Silver Tequila and iconic bottle shape. Besides their Silver (or Blanco) expression, they offer many different types of Tequila and a few other products.

Like all Tequilas, Patrón is made from the heart (piña) of the Blue Weber Agave. If you want to visit them and see their production, you can do so in their Hacienda Patrón. The exclusive place is located in the Atotonilco el Alto in the highlands of Jalisco.

How is their Tequila produced?

Patrón produces its Tequila in small batches using old and traditional processes. What sounds normal at first is a highly unusual thing to do these days.

Typically, larger liquor producers use huge stills to produce an enormous volume of liquor at once. But Patrón wanted to keep their batches small to keep quality high. So they decided to build out - meaning, they use a large number of small pot stills instead of fewer large ones.

With this unusual setup, they are able to produce their Tequila in small batches using the same techniques as at the beginning.

They continue producing two different batches of their spirit, which are then blended. One is made by grinding the agave with the help of a traditional stone tahona mill and is fermented with agave fibers. The other one crushes the piñas with a modern roller shredder.

This technique only applies to their traditional product range. Other expressions like Gran Patron Smoky or the Roca line only use one type of them or are made in a completely different way.

How to Drink Patrón

Tequila produced by Patrón is of high quality and can easily be enjoyed neat. Pour a bit of the spirit into an Old Fashioned glass and sip it slowly to experience the full range of flavors and aromas.

Yet, the standard silver expression performs best in mixed drinks. Use it in a classic Margarita recipe or in a fruity variation. Especially in combination with berries or grapefruit, the spirit shines.

This standard range of products, especially the silver and reposado expressions, is extremely versatile. You can try it in a variety of Tequila-based cocktails like the following:

It all began in 1989 when John Paul DeJoria and Martin Crowley decided to create their own Tequila. DeJoria, a self-made billionaire and founder of Paul Mitchell hair brand, and Crowley saw a gap in the American Tequila market. Because, back at the time, it was almost impossible to get high-quality Tequila in the States.

Together with freelance distilling consultant Francisco Alcaraz, they created their first batches in the historic Siete Leguas distillery. It was a wild and adventurous journey with many bold moves that cemented Patrón's leading position in the Tequila and spirits industry.

In 2005, the brand sold half a million cases per year. And another year down the road, they hit the million-cases-per-year mark. In 2018, the Bacardi Group bought the brand. As you would expect, the acquisition was not cheap. The buying price was just over 5 billion dollars.

The regular offering divides into three different categories. Each of these addresses a specific price range. -From Tequila Patrón and Roca Patrón to the luxury bottles of Gran Patrón. Yet, even with the "basic" Tequila, you get exceptional quality.

Patrón Silver is a handmade small-batch Tequila. It's a blend of two different triple-distilled Tequilas. That blend is then bottled in the icon hand-blown bottle and numbered individually. This Tequila has a clean taste and is super smooth. The spirit reveals a beautiful balance of citrus, fruit, and cooked agave notes. A great Tequila perfect for sipping or in cocktails.

The Reposado expression from Patrón is aged for at least two months. Just like the Silver expression, it's a blend of two Tequilas produced in very different ways. Compared to other Reposado Tequilas, it's lighter, with only faint notes of oak and vanilla.

The Añejo Patron matures for at least twelve months. And this type of Tequila is perfect for sipping. Aged in various barrels, e.g., French Limousin, former Bourbon barrels, new American, and Hungarian oak barrels. The result is a pale golden Añejo Tequila that's super clean and slightly spicy. Rich in flavor, this Tequila shows notes of Caramel, vanilla, fudge, and hints of agave.

If you're looking for an even richer, longer-aged Patrón Tequila, the Extra Añejo is a perfect choice. Just like the regular Añejo, it matures in different barrels. In total, the Tequila ages for at least three years. Released in 2017, it's the latest addition to the core family of Patrón Tequilas.

The Tequilas in the Roca Patrón range are small-batch releases produced in traditional tahona stone mills. So, in contrast to the standard Silver Tequila, this one is not a blend. The result is a dry Tequila with lots of minerality and rich notes of toasted agave.

The Roca Reposado Tequila gets made the same way as the Silver version. Aged in former Bourbon barrels for at least three months, the Tequila has some beautiful vanilla notes and an intense vegetal aroma from the agave plants. Compared to the regular Reposado, this one matures for at least a month longer.

Roca Patrón Añejo is a Tequila aged for a minimum of 14 months in former Bourbon barrels. The flavor profile is complex yet comparable to the Roca Reposado but with an even richer earthy and vegetal note. Hints of charcoal, vanilla, citrus, and oak round off the taste of this beautiful Tequila.

The Gran Patrón Smoky shows similarities to Mezcal, not only because of its smoky notes. The process of making it is also very similar. The agave is roasted with mesquite for multiple days before it gets milled by a stone tahona.

After fermentation, it goes into the bottle straight away without barrel-aging. The result is something hardly comparable to other Tequilas. The best comparison is a super-refined quality Mezcal with a flavor of bacon, roasted agave, and a delicate note of smoke.

Note: this product is discontinued, like the Roca line and some Patrón liqueurs.

Gran Patrón Tequila is a premium triple-distilled Tequila, aging for 30 days in oak tanks. It has a bright and crisp color and carries notes of fresh citrus and fruits. The finish is slightly spicy with hints of black pepper. -A smooth and elegant Silver Tequila, perfect for sipping neat.

Gran Patrón Piedra is a finely balanced, aged Tequila first released in 2013. Piedra ages for four years in French Limousin and new American oak barrels. During this time, it develops a rich aroma and flavor profile with notes of agave, vanilla, and mushroom.

Gran Patrón Burdeos is another aged premium Tequila from Hacienda Patrón. It's an amazing triple-distilled Tequila that ages in various barrels. First aged for a year in former Bourbon barrels, then for another ten months in French oak barrels, and eventually in former Bordeaux wine barrels for another two months.

The Bordeaux barrels also lend the Tequila expression its name as Burdeos is the Spanish term for Bordeaux. The taste of this Tequila is highly unusual and fruity, reminding of a blend of fine, aged Cognac and a fruity Tequila.

Besides the standard bottles, Patrón offers a wide range of limited editions. For example, collectible versions of Silver Tequila or extra-long aged Tequilas, like the Extra Anejo 5 Años, 7 Años, and 10 Años.

Additionally, they have numerous other special releases, each strictly limited and often sheer impossible to get. The latest release, the Chairman's Reserve, comes in a beautiful wooden box with an NFT that proves your ownership of this highly sought-after piece.

Not only does the brand produce excellent spirits they also have some tasty liqueurs. Their coffee liqueur called XO Cafe and Citrónge Orange are the most popular.

The Citrónge contains a variety of fruity liqueurs based on their standard Tequila. The original flavor was orange and popular as a substitute for Triple Sec in a Margarita.

Later the brand added more flavors to the line, like Citrónge pineapple, lime, and mango, which they decided to discontinue again.

Patrón XO Cafe once was a star of the Patrón liqueurs. It is a rich, dry, and intense coffee liqueur made from first-class Tequila and Arabica coffee essence. The coffee flavor with just a hint of Tequila was superb in an Espresso Martini. However, just like most Citrónge products, it was also discontinued in late 2021.

How many calories in a shot of Patrón Tequila?

Which Patrón Tequila was discontinued in 2021?