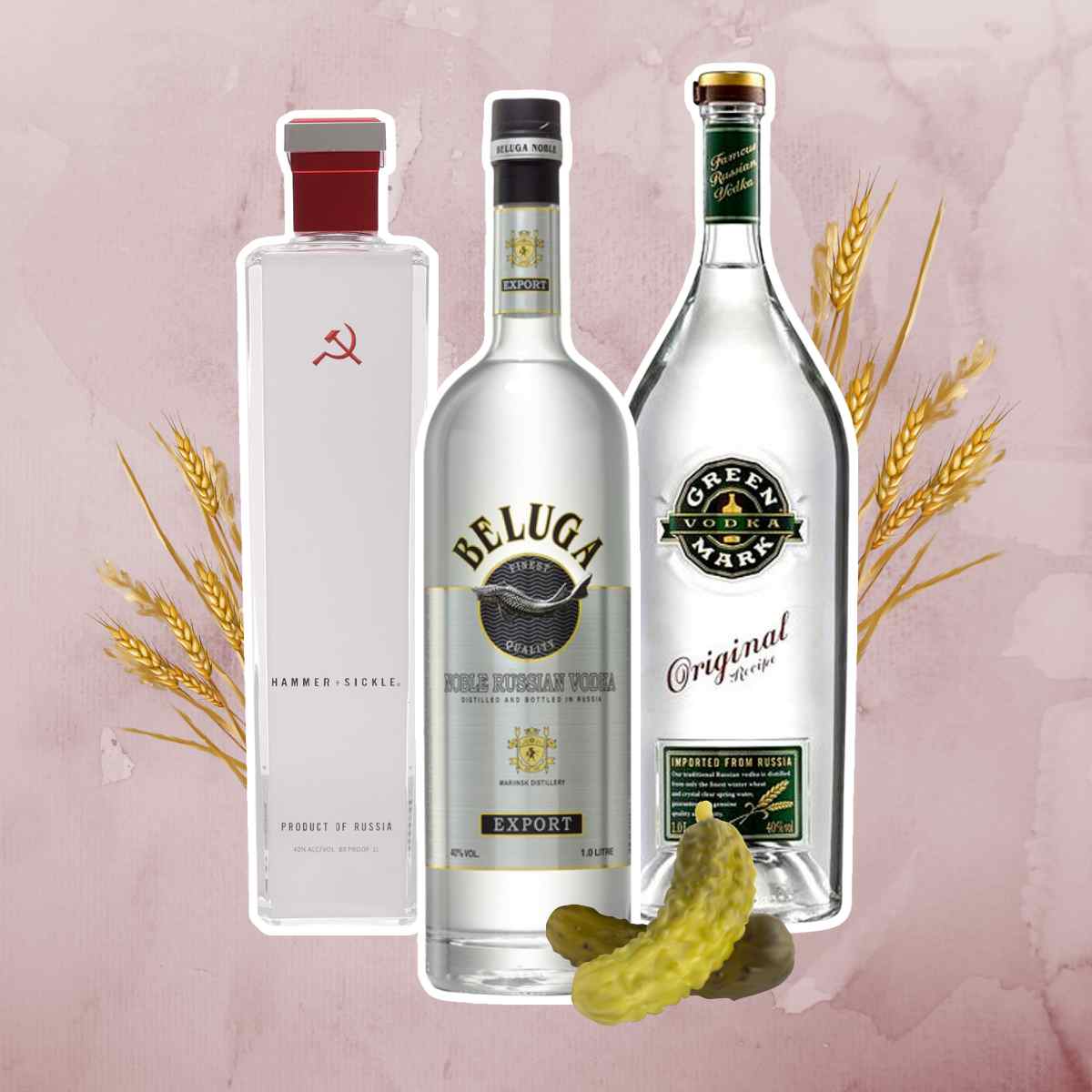 Vodka from Russia is world-renowned. Yet, not every brand with a Russian-sounding name is actually produced there. So here's our guide to the best Russian Vodka brands.

Russia and Vodka are firmly linked. The grain spirit is one of the country's national symbols and goes back more than 500 years. Also, Russia is the number one country regarding per capita consumption.

The reason for this is partly the country's soil composition. It provides the perfect environment for growing grains and potatoes, the base ingredients for most Vodkas.

Vodka made in Russia is also perceived as a quality seal. Though, in the US, the import of Vodka brands from Russia is declining. In 2021, Russian brands only accounted for 1.3% of Vodka imports to the United States. [1] And you can bet that this number will be even lower in 2022.

But the question remains: What Vodka is made in Russia? And we're here to answer it for you. Discover the top brands from Russia you should try.

Beluga is a premium brand introduced in 2002. The spirit is produced in a traditional distillery called Mariinsk, which has been making Vodka since 1900.

Tastewise, Beluga is classic Vodka made in Russia. It's crisp and super smooth, with only a slight taste of grains. A perfect spirit to drink straight.

When the brand was launched, word of mouth spread so fast that it became a leading product almost instantly. That was a huge plus and helped establish it outside the country.

Introduced: 1998
Produced in: St. Petersburg, Russia
Made from:: Winter wheat

Russian Standard Vodka is from St. Petersburg, the famous city close to lake Ladoga. The location was chosen deliberately as the Vodka is blended with the clear glacial water of this lake to achieve bottle strength.

This spirit is based on winter wheat and is filtered four times with charcoal before it's blended and bottled at 40% ABV.

Introduced: 2007
Produced in: Kashin, Russia
Made from: Winter wheat

Hammer & Sickle Vodka is an unambiguous entry in this list. While it is a Vodka produced in Russia, the actual brand behind this spirit is American.

The ingredients that go into this Vodka are, again, winter wheat. They are harvested in a region called Chernozem or Black Earth region. This name refers to the high mineral content in the soil that makes it exceptionally fertile.

Introduced: 2003
Produced in: Russia, but soon in Miami, Florida
Made from: Winter wheat, rye

Zyr Vodka is another premium Vodka brand produced in Russia but actually running under American management. Zyr is an excellent Vodka for sipping chilled.

It's made from a mix of winter wheat and rye growing in the Moscow region. The water used to blend the spirit comes from the north-western part of Russia, close to the border with Finland.

Introduced: 1995
Produced in: Chernogolovka, Russia
Made from: Winter wheat, rye

This Vodka brand offers an authentic, fresh, and clean taste with a super smooth finish. It is dominated by black pepper with hints of lemon zest and subtle bread-like flavors.

It is made from a combination of winter wheat and rye and blended with water from artesian wells up to 557 feet deep.

Introduced: 2004
Produced in: St. Petersburg, Russia
Made From: Winter wheat

Imperia is produced in the same distillery as Russian Standard Vodka. It's made using a very advanced distillation process and is layer-filtered.

After distillation, filtration, and blending, the spirit rests for up to 72 hours before bottling. The resulting spirit is super clean and smooth and has an elegant herbal scent.

Introduced: 1901
Produced in: Riga, Latvia
Made from: Wheat, rye

Stoli aka. Stolichnaya is a must-mention on this list. It's one of the most remarkable Vodka brands from Russia. However, lately, the product is no longer produced there.

The reason is an ongoing dispute between SPI Group, the private company that produces Stoli, and the Russian government. [2] Stolichnaya used to be a state-owned company that was privatized in the early 90s.

However, the Russian government claims that privatization is incomplete and that the rights should go back to the state of Russia.

This dispute is why the production shifted to Latvia and why, starting in 2022, the SPI Group no longer sells the product as Stolichnaya but under the new name Stoli.

Introduced: 2013
Produced in: Sokolovo distillery in Siberia, Russia
Made From: White winter wheat

Mamont is made in Siberia from locally harvested white winter wheat and is 100% Russian Vodka. It's an ultra-premium spirit sold in a tusk-shaped bottle in remembrance of the discovery of the Yukagir mammoth in Siberia in the early 2000s.

It's crystal clear and smooth Vodka. The taste is clean, with light notes of bready grains and black pepper. It's perfect for serving chilled or as a base in cocktails.

Introduced: 2003
Produced in: Topaz distillery near Moscow, Russia
Made From: Winter wheat

Green Mark is a quality Russian Vodka brand named after the old standard for Vodka - the Green Mark. The seal warrants that this spirit is of high quality, guaranteed by the government.

It was only effective between the 1920s and 1950s but is still very well-known in Russian society. Green Mark Vodka utilized it for marketing purposes. And indeed, their product is of exceptional quality. It's crisp and super smooth with a slightly sweet taste.

Vodka Brands that sound Russian but are not

All over the world, people associate Vodka directly with Russia. That's why some brands jumped onto this and created bottles that sound like their Vodka is Russian-made when it's actually not.

One of the best-known brands that appear Russian but are not is Smirnoff. Smirnoff started in Moscow but relocated ages ago. It belongs to the British beverage company Diageo and is produced in Illinois, US. [3]

Some other brands that merely sound Russian are:

Vodka from other countries

Besides Russia, there are plenty of other countries producing high-quality Vodka. Ukraine, Belarus, Finland, and Sweden are just some of them. Some of the best brands, though, come from Poland.

If you want to try them, check out these popular Polish Vodkas.

What is the most popular Vodka in Russia?

In Russia, Vodka is typically not categorized by brands but by purification levels. There's "Basic" (worst), "Extra", "Lux" (most common), and "Alpha" (best) ethanol. Russians typically prefer to consume "Lux" or "Alpha" ones, no matter the brand.

How do Russians drink their Vodka?

Vodka is typically served ice-cold along with cucumber pickles, potatoes, or fatty meats.

Which are the best Russian Vodka brands?

Brands like Beluga, Stolichnaya, and Russian Standard are all very popular all over the world. The most popular one is probably Stoli. That is also a preferred option of many bartenders in many mixed drinks.