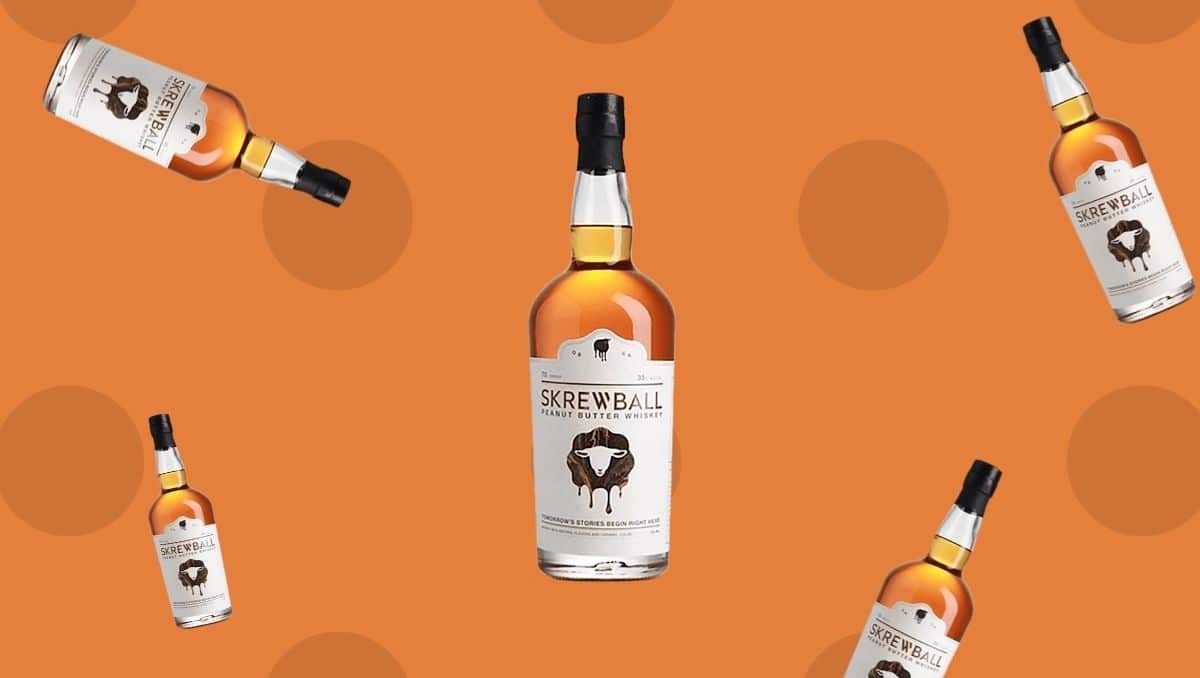 Peanut Butter Whiskey is the newest trend when it comes to flavored Whiskey. And Skrewball was the first brand to come up with this unusual combination.

When thinking of peanut butter, Whiskey is likely not the first thing that comes to mind. But that's just what Skrewball created, and it already managed to grow a loyal fanbase.

But how did peanut-butter-flavored Whiskey come to the market? And is it an alternative to a dram of regular Whiskey?

When I first heard about Skrewball and read a few reviews, it reminded me of the reviews Bumbu Rum gets. Many people that are usually not into Whiskey or Rum say they were converted by a new sweet and low ABV version of the respective spirit.

So let's take a look at this Peanut Butter Whiskey and how you should drink it.

What is Skrewball Peanut Butter Whiskey?

Skrewball Peanut Butter Whiskey is a flavored and sweetened liquor with a strong peanut butter taste. It's not actually a Whiskey -or Whisky- as it would need to be at least 40% ABV or higher. Instead, it comes at only 35% ABV.

Additionally, in Europe, it would also need to barrel-age for three years or longer, which Skrewball's Peanut Butter Whiskey does not.

The founders and producers of Skrewball are Steven and Brittany Yeng. Steven owns and manages a bar, OB Noodle House Bar 152, where he serves his signature Peanut Butter and Whiskey shots.

These shooters were Steve's invention and turned out to be a real crowd-pleaser. Encouraged by this success, he and his wife decided to bring a peanut-butter-flavored Whiskey to the market.

How does Skrewball taste?

Skrewball has a sweet taste with intense notes of peanut butter, caramel, toffee, and a hint of the typical Whiskey aroma.

Discerned Whiskey drinkers will unquestionably say that this is not even close to the real thing. And that also might be the reason why Skrewball is popular mainly amongst non-Whiskey drinkers.

The sweetness combined with the thick and sticky consistency makes it more of a liqueur than a spirit. To give you a better idea, tastewise it is closer to Baileys or Frangelico than to a genuine Bourbon or Rye.

That doesn't at all make this beverage bad. However, it is different from how it is advertised and from what you would expect from something that says Whiskey on the label.

When looking at the official recipes from the Skrewball brand, you can see that they also don't see their product as a spirit. All these cocktails include at least one genuine high-proof spirit (e.g., Rum, Rye, or Vodka) besides Skrewball.

How to drink it

The inventors aimed to bring the taste of their famous shot into a flavored Whiskey. So the logical answer to the question of how to drink Skrewballs Peanut Butter Whiskey would be to serve it as a shot - chilled, of course.

However, straight as a shot, it is only recommendable if you have a sweet tooth. For everyone else, I recommend a mix of 50 percent Skrewball and 50 percent Rye. Shaken on ice and then strained, this balances the sugar levels well.

Further, Skrewball's Peanut Butter Whiskey certainly is nothing to sip neat or on the rocks. At least for my taste buds, it's definitely way too sweet for that.

No, Skrewball is, per definition, not a Whiskey. With a bottling strength of 35% ABV, it doesn't meet the minimum of 40% ABV required to get classified as Whiskey.

Can you drink Skrewball straight?

You can drink it straight, but it might be too sweet. Better drink it with a sea salt rim or mix it in a shot of 1 part Skrewball and 1 part Rye.

Is there peanut butter in Skrewball Whiskey?

It does not contain actual peanut butter. However, natural peanuts are responsible for the flavor of the spirit. And its typical color and sweetness are achieved by the addition of caramel.

What's the price of Skrewball?

Skrewball usually sells for $20 to $30. That puts it into the medium-priced section for similar liqueurs.