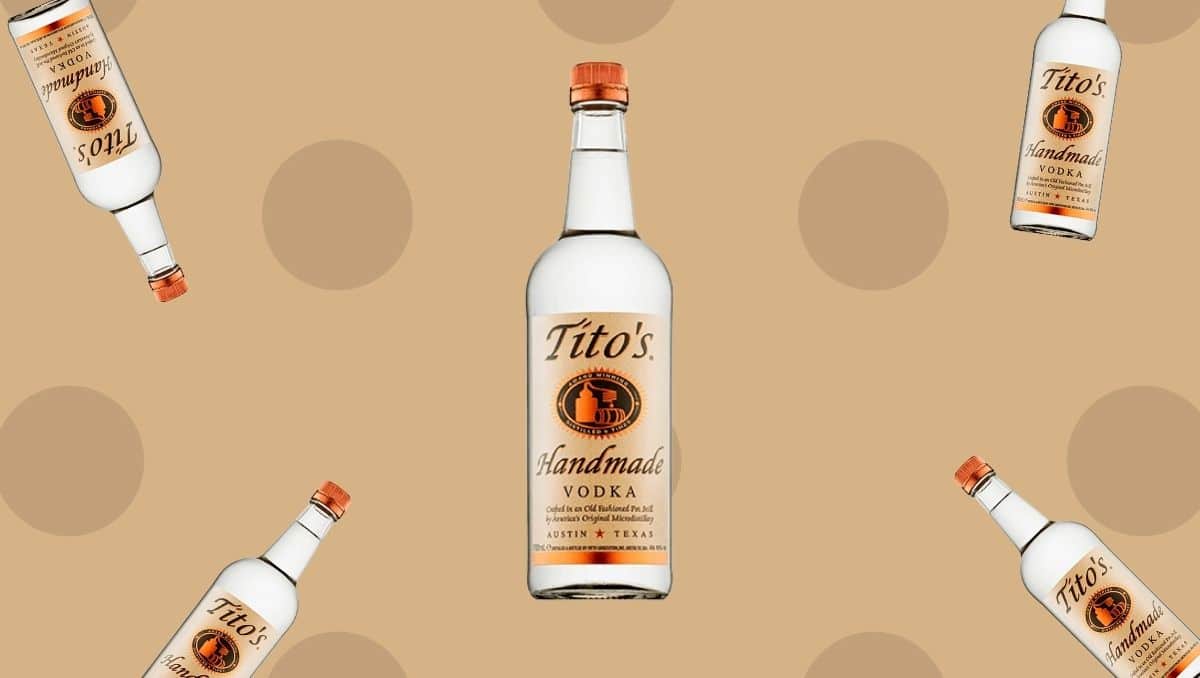 On the market for over 20 years now, Tito's Handmade Vodka has become one of the most popular Vodka brands in the US. And what makes it so unique, apart from the Texan origin, is the base which is neither wheat nor rye.

Tito's Vodka is among the top-selling Vodka brands in the United States, right in line with big international names such as Grey Goose, Belvedere, and Absolut.

While all the aforementioned put their bets on modern bottles, expensive-looking labels, and luxury branding, Tito's is just the opposite and keeps things basic. Of course, Grey Goose and Belvedere are prominent top-shelf products, so they better make that effort.

Tito's, in comparison, is more affordable but by no means the cheapest option on the market. So, what's behind the success of the Vodka from Austin, Texas?

What is Tito's Vodka made of?

Many people believe Vodka is made from potatoes. And indeed, some brands distill the clear and odorless spirit from the vegetable. However, most Vodka is made from wheat or rye. But Tito's uses neither. The base used for the popular Vodka is 100% yellow corn.

That consequently makes it a perfect choice for people suffering from gluten intolerance. Unlike most other grains, corn is naturally gluten-free. And so are water and yeast, the two other elements needed to make Vodka. Therefore, Tito's Handmade Vodka is naturally -and certified- gluten-free.

The story behind Tito's Vodka

Tito's Vodka is a creation of Bert (Bertito) Beveridge. And as with most success stories, it started with some failed businesses. It's a prime example of what can happen if you seriously set your mind to something.

So besides being informational, the story is also inspirational and hopefully motivational.

Tito Beveridge started out in the oil and gas business, went to Venezuela, returned to Texas to try his luck with a drilling company. From there, he moved on to round water geology and finally, get got into the mortgage business.

Around that time -the early 1990s- he also began making homemade flavored Vodka for fun and to give to his family and friends.

Due to that, Beveridge was known as the "Vodka Guy" among his friends even before Tito's Handmade surfaced. But that, as well, was off to somewhat of a rough start.

When mortgage rates went up, Beveridge decided to introduce his flavored Vodka to liquor stores in the area. And, as you may have guessed, he got turned down by all of them.

But not without giving Tito some advice on how he could try tackling the spirit market instead. And that was with a self-distilled, quality product.

Following this advice, Tito taught himself how to build stills and distill spirits with books and photos and a lot of try and error. -Remember, it was the mid-90s, so he had no search engines or youtube to help him out.

Once he understood the principles, he decided on a very popular US produce as a base for his Vodka: corn - instead of the more common grains like wheat and rye.

Once Tito was satisfied with his product, he tried to find investors. But no one was interested. Not least because there was no legally approved distillery in Texas at that time, and people found it hard to believe that someone should get the official permit to do so anytime soon.

Determined to get his spirit on the market, Tito Beveridge took all his savings, maxed out 19 credit cards, managed to get the permit, built his one-man-distillery, and went into business.

However, business gave him a hard time for another eight years before things finally started to work out.

Until then, he hand-bottled his Vodka, glued the label on, and drove around the state to introduce Tito's Handmade Vodka to bars and liquor stores.

Today, Tito's is the bestselling Vodka in the United States and made Beveridge a billionaire. In 2020, it was the highest-selling distilled spirit by volume, with over 10 million nine-liter cases sold.

But nothing is all roses, and some people started to express their doubts about the "Handmade" in Tito's. But I want to get to that later on. First, let's see how Tito's Vodka is produced in general.

How is Tito's Vodka made?

In the early days of Tito's Vodka, it was produced in a self-made 16-gallon pot still cobbled together by Beveridge.

For that, according to him, he used two kegs of Dr. Pepper, a turkey-frying rig, photos of prohibition-era stills - and surely a lot of creativity.

He named it Mockingbird Distillery after the Texan state bird for good luck. And he produced, filled, sealed, labeled, and distributed every single bottle for a long while.

Even though those days lie in the past, Tito's Vodka is still produced in old-fashioned pot stills. And that is pretty uncommon for Vodka, as the majority of brands use column stills for their production.

Working with pot stills is more labor-intensive. However, it's the preferred method when you aim to produce spirits of the highest quality.

Details on the production process are a well-kept secret. They only reveal that their corn mash gets distilled no less than six times. And the method is supposed to be similar to that of single malt Scotch or French cognac.

But based on the large production volumes, experts assume that they now use a combination of pot and column stills. Tito's never confirmed this, though.

Tito's gets distilled from 100% corn with the help of only water and yeast. They also don't add mash later on during the process as some others may do. That's why it is entirely naturally gluten-free.

On pouring Tito's Vodka, you get a completely transparent spirit that forms some legs but not too many. And you can immediately detect a hint of the sweet corn scent and not too much of an alcoholic bite.

The taste is pretty smooth and silky but with a mild burn in the back of your throat. -And that is alright, since you are drinking 40% ABV Vodka, and it's not the sharp edge you get from cheap spirits.

Overall, Tito's Vodka is neutral, as you do expect from a proper Vodka.

The handmade part certainly is up for discussion with Tito's bringing in neutral grain spirit and redistilling it six times. With a sales volume of about 100 Mio. liter per year, it is no wonder production is not as "handmade" as it would be for true microdistillers.

Some turned away from Tito's when production increased. Nonetheless, you get good value for money, and you won't find a lot of equally good quality in the same price range with Tito's Vodka. And it certainly is a good choice for mixing your cocktails at home.

In general, Vodka is a clear, neutral, and odorless spirit. Of course, Tito's is no exception here. And as such, it goes well with almost everything, from soda to juices to liqueurs. There are no limits.

Yet, Tito's is not as smooth as some other brands and has a slightly more detectable harshness to it. So here are some recommendations for cocktails with Tito's that can handle the subtle yet notable edge very well:

Moscow Mule is a classic and refreshing Vodka cocktail. The lime juice and ginger beer go well together with the sweet notes of corn and the subtle bite.

The French Martini is an elegant riff on the classic Martini that brings in some fruity notes with the addition of raspberry liqueur and pineapple juice.

If done right, a Long Island Ice Tea has nothing to do with the cheap versions you get at student parties with the sole purpose of getting wasted on a budget.

Caipiroska: The Caipiroska is a Vodka-based version of the famous Brazilian Caipirinha cocktail.

Compared to the original version, a Caipiroska made with Tito's Vodka is slightly more floral and less grassy.

Since 2014, multiple lawsuits got filed against Tito's Handmade Vodka, claiming that the handmade tag on the label is giving false information about the nature and production of the product.

It started with Gary Hofmann, who accused Fifth Generation Inc., the company behind Tito's Vodka, of deliberately lying to their customers about their signature product. He sued them on behalf of all customers for false advertising, among other claims:

There would be nothing handmade about Tito's Vodka under any definition of the term. Commercially manufactured neutral grain spirit, trucked to the facility, would be distilled in a large industrial complex with modern, technologically advanced stills in massive quantities.

In 2015, Trevor Singleton filed a lawsuit against Fifth Generation Inc. with similar allegations. And considering the tremendous quantities produced each year, the handmade tag certainly seems dubious. But then, what does handmade even mean in the context of Vodka distillation?

Tito Beveridge defended himself and his company and argued that he applies the same method now as he did during the early years of Tito's Handmade Vodka. Only, he has more stills now.

Also, a federal agency approved his label, which displays the handmade loud and proud. Therefore the law would back him regarding his product being handmade.

However, a judge informed him that federal review does not protect him from claims in any way.

Nevertheless, we won't know any time soon what precisely handmade means when it comes to Vodka-making. And neither can we tell if Tito's Vodka fulfills possible requirements because, so far, all cases got settled outside court.

Tito's is the bestselling Vodka in the United States, and there's a reason. It's good value for money. With USD20 to USD25 for a 750ml bottle, Tito's absolutely is one of the more affordable options.

What's so special about Tito's Vodka?

Does Tito's give you a hangover?

Tito's is a Vodka of good quality, and the better the quality of a spirit, the lower the chances for a hangover. Also, it is a clear spirit, which further reduces potential day-after headaches. Therefore, especially when consumed neat (e.g., as a shot), you don't have to worry about a hangover too much. But then, it also depends on what you mix it. Of course, a high sugar content can also cause a hangover the next day. So you want to make sure, drink water with it!