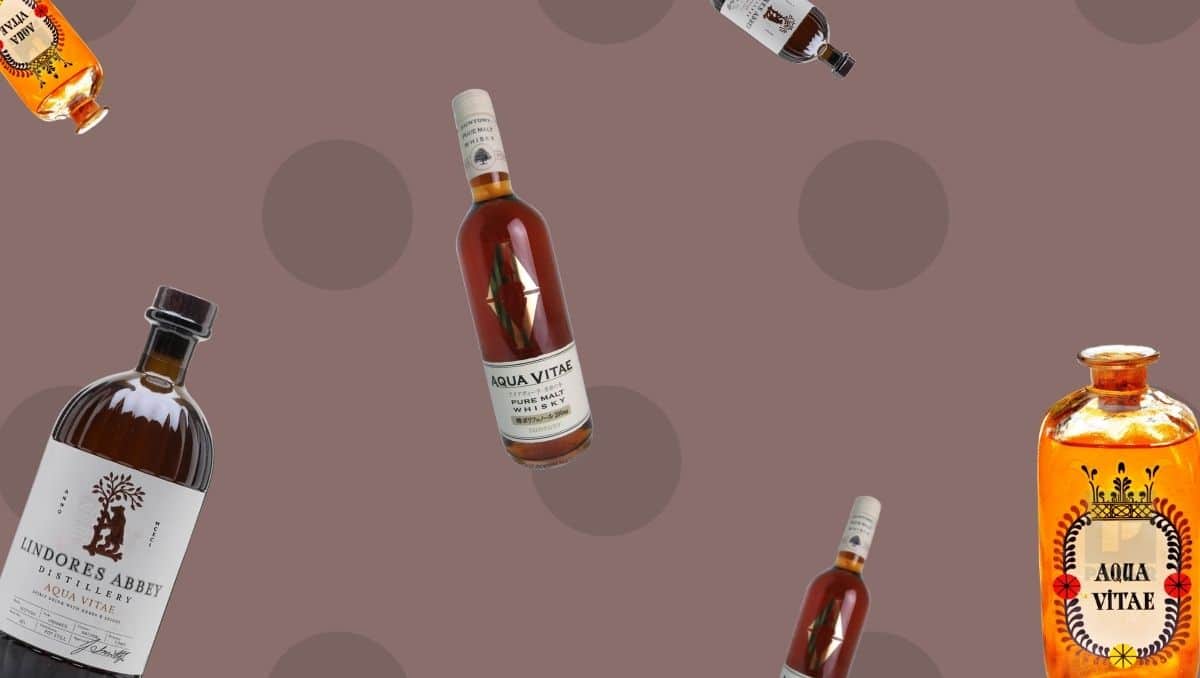 Aqua Vitae - The Water of Life

The term Aqua Vitae stands for a historic distilled spirit, and because it comes in many different forms, Aqua Vitae also has the byname mother of all spirits.

Aqua Vitae has a very long history. Its roots date back to the Roman Empire, where it stood for various distilled spirits as well as for baptism water. However, over time the meaning of the term evolved and then described a variety of alcoholic beverages. And as the Roman empire expanded its territory, the term Aqua Vitae traveled with it.

The word translates to water of life and is present in many languages, like the Gaelic uisce beatha, French eau de vie, Scandinavian akvavit, or the Italian aquavite. Also, in Russia, Ukraine, Belarus, and Poland, you can find variations of it. And what all have in common is they stand for a local kind of distilled spirit.

What is Aqua Vitae?

Aqua Vitae is an old term describing many different types of distilled spirits. The base of these spirits usually is wine and, therefore, Aqua Vitae often gets linked to French Brandy.

However, that's just a fraction of what Aqua Vitae is or can be, as, in fact, it could be anything. For example, the Scottish version is based on malt, which is why some consider it the predecessor of Scottish Whisky. Or the Scandinavian akvavit is typically based on grains or potatoes.

Why is it called Aqua Vitae?

As mentioned already, Aqua Vitae literally translates to water of life. Like many other spirits, it also had medical purposes like supporting digestion and relieving pain. That's also the main reason why Alchemists John of Rupescissa and Taddeo Alderotti chose the name Aqua Vitae as they believed they discovered a new quintessence: A life-giving elixir with multiple medical use-cases.

Let's start with the Roots of Aqua Vitae in the Roman Empire. The Romans used the word to describe distillation products and baptismal waters. And when the Romans conquered more and more land, the term was adopted by the people living there.

Later medieval alchemists started experimenting with distillation processes and ingredients and created new types of distilled spirits. And they often used wine or other lower ABV beverages to distill a higher-proof liquor. They also infused these liquors with complex recipes consisting of herbs, plants, rinds, roots, flowers, and spices. By that, they created herbal spirits that partly exist until today. -Green Chartreuse is one of those.

Many of the ingredients were said to have medical properties. So it isn't surprising that the distilled spirit got used for curing illnesses. For instance, Taddeo Alderotti, an alchemist who lived in the 13th century, created such a potion distilled from wine. According to him, his creation was 'the mother and mistress of all medicines'. And even though his version of an Aqua Vitae was certainly not that powerful, by drinking a bit every day, he reached the age of 87. Not that impressive today, but back in the day, that must have seemed nearly impossible. After all, life expectancy in the 13th century was just around 30 years.

The birth of Whisky

About 200 years later, in the 1500s, Brother John Cor from Lindores Abbey was asked to produce Aqua Vitae for King James IV. He ended up creating the first-ever version of Scotch Whisky. Out of 500kg of malt, he made around 400 bottles of Whisky. And, of course, as it was the custom, the spirit contained infusions of various plants, herbs, and spices.

The malt-based spirit got mainly used as an anesthetic. And soon, King James IV grew more interested in the medical properties of his Aqua Vitae and decided to produce it in large quantities. In that course, he also set up the 'Royal College of Surgeons' and gained the exclusive rights to manufacture Aqua Vitae.

The mother of all spirits and liqueurs

Aqua Vitae was more than a general term for distilled spirits. It was also a term that described complex mixtures based on Aqua Vitae. Today, we call such products liqueurs. So basically, it's not only a forerunner of spirits but also liqueurs.

Green Chartreuse, the complex liqueur made by the monks of the order of Chartreux, is just one example of a more modern Aqua Vitae. And despite already being quite elaborate, Green Chartreuse doesn't even come close to the most complex recipes out there.

To give you an idea of the dimension we're talking about: The Danish princess Anne of Saxony created one of the most complex and thought-out recipes. Her white Aqua Vitae creation asked for nothing less than 387 different ingredients. After a 9-step distillation process that took over two years, the final product was ready for consumption. If one were to make her yellow Aqua Vitae, it would require 28 additional ingredients and six more months of aging.

And people soon realized that, in addition to the medical benefits, the alcohol in the distillates made them tipsy. From then on, the potent liqueurs were more and more consumed for pleasure or to 'prevent diseases.'

As described before, the historic Aqua Vitae evolved into something new. Whisky or Whiskey is a perfect illustration of this. Another famous example is Vodka. The term Vodka derives from the Slavic word voda, translating to little water, and is also said to have its roots in Aqua Vitae.

But some products remain more traditional. The Scandinavian Akvavit is produced very similarly to how it was in the 15th century. And, also the distillery of Lindores Abbey still produces their Aqua Vitae using old procedures. They recently began to distill Whisky again and also make Aqua Vitae. Mainly because their Whisky needs time to age and rest before it can be sold and, also, to keep traditions alive. And just like more than 500 years ago, they infuse a malt-based spirit with a variety of herbs, plants, flowers, and roots that grow in their gardens and so keep the water of life alive.