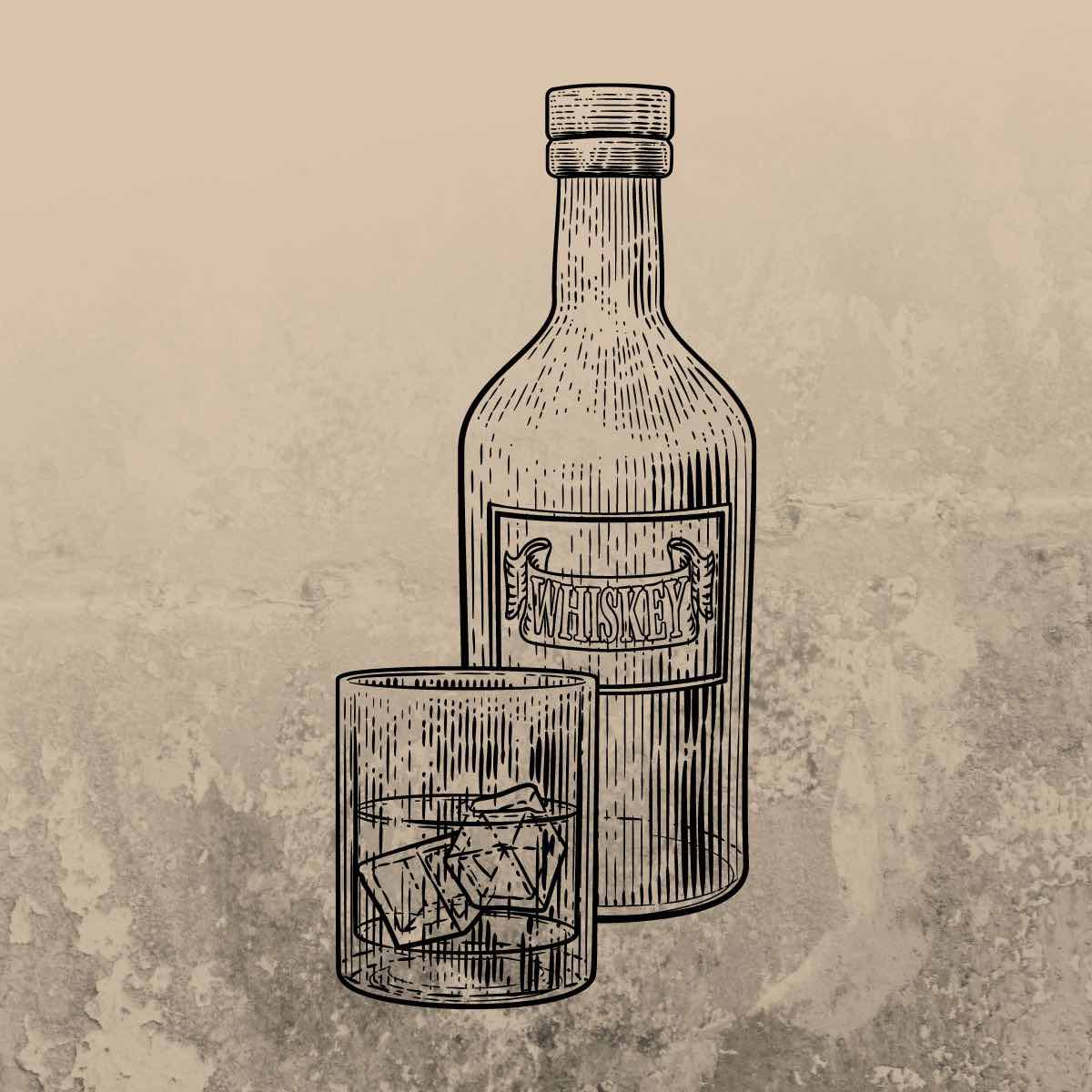 A complete Guide to Whiskey

Whiskey comes in many different styles and types. There's even a particular vocabulary. We want to give you an overview with this summary of everything you have to know about Whiskey.

Whiskey is one of the most popular spirits in the world. The barrel-aged beverage is a favorite in Europe, Northern America, and Asia.

Our guide to Whiskey will help you understand the various types, styles, and the most common terms in the world of Whiskey.

Simply put, Whiskey is a distilled spirit made from malted grains like barley, corn, rye, and wheat.

After distillation, Whiskey is aged in barrels for at least two years up to a few decades. The longer a Whiskey matures, the higher the quality of the spirit.

The grains used to produce Whiskey and the distillation methods and tools vary between the different styles.

Whiskey is usually categorized by origin, and the most popular types are Scotch, Irish, Canadian, Japanese Whisky, Bourbon, and Rye.

But before we go into detail, I first want to quickly answer a question: what is the difference between Whiskey and Whisky?

The difference in spelling between Whiskey and Whisky simply indicates a regional difference. While Ireland and the US use the term Whiskey for their aged grain liquor, other important producers like Scotland, Canada, and Japan write Whisky without an e.

There's an interesting story behind this. So, if you are interested, here is a detailed explanation.

Scotch Whisky has to be produced in Scotland and must contain barley. Most Scotch is distilled in one of the five official Scotch regions: Campbelltown, Highlands, Lowlands, Speyside, or Islay.

This Whisky needs to age a minimum of three years in wooden barrels. Usually, the distilleries use former Bourbon or Sherry barrels. Sometimes they also use new casks.

Scotch has five different sub-types. Here's a short description of those. -For more details, read our guide to the different Scotch types.

Single Malt: Single Malt Scotch is produced using malted barley only and distilled at one single distillery. It is considered the highest quality expression of Scotch.

Single Grain: Single grain is also produced in one distillery. But in addition to malted barley, other grains are used too. This type is rare and often used as a part of Blended Grain or Blended Scotch.

Blended Malt: This type is made by blending Single Malt Whiskys from different distilleries.

Blended Grain: Similar to Blended Malts, this type is a blend of Single Grains from more than one distillery.

Blended: Finally, the most common type of Scotch. Blended Scotch is a combination of Single Malts and Single Grains.

The main ingredients in Irish Whiskey are malt and barley. To be called Irish Whiskey, the liquor must be produced on the green isle and has to age for at least three years in wooden barrels. Most of them are triple-distilled, though this is not a must.

Overall, Ireland's laws regarding Whiskey are far less strict than Scotland's. But still, there are two sub-types that you should know.

Single Pot Still: This Irish Whiskey is made at a single distillery from a mix of malted and unmalted barley, distilled using a pot still.

Blended Irish: The standard type of Irish Whiskey. When producers combine separately-distilled Whiskeys into one product, they have to write "blended" bottle label.

Canadian Whisky is made with rye and corn. It has to barrel-age for at least three years to be called Whisky.

It's often labeled as Rye Whisky. However, that doesn't mean that it's 100% rye. In fact, oddly, Canadian Whisky can be labeled as rye when not containing any rye at all.

The reason is historical: Canada was once known for producing high-quality Rye Whiskey, but they never protected the term legally. The name stuck, and producers kept using it even when not working with rye.

Japanese Whisky is up and coming. Based on the traditional Whisky producing methods from Scotland that Masataka Taketsuru, a chemist and businessman, brought to Japan in the 1920s, Japanese Whiskey has developed its own unique style.

This close connection to Scotch is also why Japan produces Single Malt Whiskys. Yet, still, Japanese and Scotch Whisky are far from the same.

Each has its own style, and while Scotch is quite famous for its smoky flavor, Japanese Whiskys is known for producing light and nuanced Whisky.

Bourbon is an American Whiskey that is known for its sweet taste. To be classified as a Bourbon, it has to contain at least 51% of corn and age in freshly charred oak barrels for at least two years.

The vast majority of Bourbon is from Kentucky. But although many believe Bourbon must be from the said state, you can actually distill Bourbon anywhere in the US.

Rye is another renowned American Whiskey. It needs to contain at least 51% of rye. And, like Bourbon, Rye Whiskey needs to mature for a minimum of two years in newly charred oak barrels.

Rye and Bourbon are quite different in taste. While Bourbon is rather sweet, Rye is known to be way spicier.

The taste of Whiskey

The taste of Whiskey strongly differs from type to type. But as all types mature in wooden barrels, they all have oaky notes and a hint of vanilla.

Bourbon is known for its sweet corn taste and usually also shows notes of caramel. Scotch, on the other hand, is known for its peaty flavors. Rye has a more spicy touch, and Japanese Whisky has smooth and subtle flavors.

How to drink Whiskey

Like all aged spirits, Whiskey is best consumed neat. This way, you can smell all the aromas and taste the different flavors.

Between your sips, you should cleanse your palate. The easiest way to do this is by sipping a bit of water.

If you're tasting a strong Whiskey, adding a few drops of water to it can actually help detect flavors as it opens them up. But start slowly and don't add too much at once.

Whiskey is also great in mixed drinks and cocktails. Many of the most popular classic cocktail recipes call for Whiskey: Whiskey Sour, Old Fashioned, Manhattan, or the Mint Julep, to name only a few.

Because Whiskey can vary so heavily in taste, finding the right one for your drink can sometimes be a challenge. So, here are some recommendations:

The history of Whiskey started a long time ago. However, it's unclear whether Ireland or Scotland created the first version of the grain spirit. Both claim to be inventors, but many of these claims lack proof.

Yet, we know that the name Whiskey originates from the Gaelic word Uisge. It is the short form of uisge beatha, better known today as Aqua Vitae (water of life).

We also know that the craft of distilling spirits from low alcohol liquids was brought to Ireland and Scotland between 1100 and 1300.

Traditionally, Aqua Vitae is made by distilling wine. But as neither Scotland nor Ireland is famous for their vineyards, the monks had to ferment something else.

In 1494, a monk called John Cor produced the first barley-based Aqua Vitae that's documented in written form. He distilled the spirit in Lindores Abbey, located in the Scottish council of Fife.

Back then, this so-called Whiskey was clear, unaged, and flavored with various herbs and plants. Pretty much different from what we now know as Whiskey.

The oldest licensed distillery to produce Whiskey is in Ireland. Bushmills, which is still making Irish Whiskey today, got their royal license to distill Whiskey back in 1608.

Early settlers in America from Ireland and Scotland brought the methods to produce Whiskey with them. But, as barley was hard to ferment, they started experimenting with rye and wheat.

The method of barrel aging Whiskey, as we know it today, was invented only in the 18th century by the Scots. They accidentally discovered that transporting their Whiskey in barrels improved its taste.

Japanese Whiskey production started in the 1920s after pioneer Masataka Taketsuru visited Scotland to learn the craft and technique. He brought his knowledge and Scotch pot stills back to Japan, where he founded the first Japanese distilleries in 1934.

The brand behind these two distilleries, Nikka, is still leading in Japan and the world.

How to make Whiskey

In short, these steps first prepare the ingredients for fermentation. Then convert the sugars into alcohol to create a low-ABV liquid.

That liquid is then distilled once or multiple times before it ages in wooden barrels. After barrel-aging, the spirit is either bottled directly or blended and then bottled.