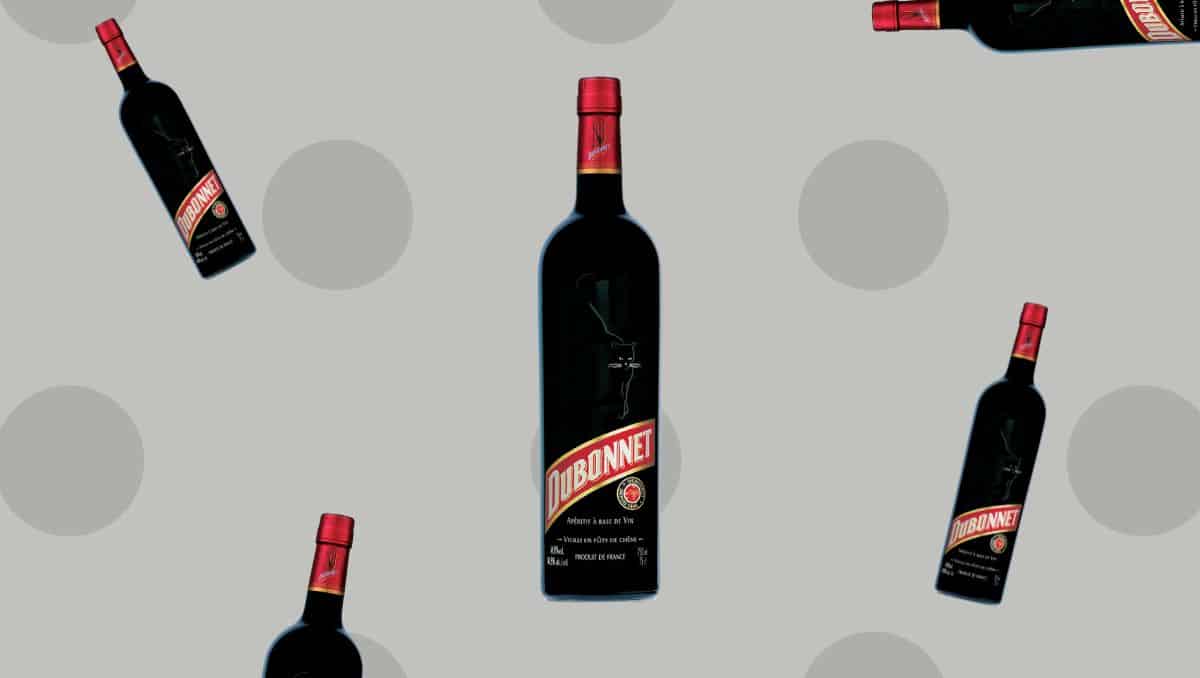 A Guide to Dubonnet

Dubonnet is a sweet aperitif based on grapes. It's a fortified wine that gets flavored with herbs, spices, and a small amount of quinine.

Dubonnet is an old and famous fortified wine from France. The red wine base is spiked with Brandy and aromatized with various herbal and spicy ingredients.

It is best enjoyed chilled as an aperitif wine or as a digestif but is also excellent as an ingredient in mixed drinks; -especially in combination with Gin.

Apart from the rich and interesting flavor profile, the aperitif wine has quite a fascinating history. In fact, a big part of its fame is due to a royal love for Dubonnet-based drinks.

Dubonnet is a fortified red wine produced in France. Its base is made from Ruby red, Ruby cabernet, and Muscat of Alexandria grapes.

This base is then spiked with Brandy, sweetened with cane sugar, and flavored with herbs and spices like blackcurrant, various teas, and cinchona bark.

Dubonnet is one of the most prominent representatives of this group, together with Cocchi Americano and Lillet.

The history of Dubonnet started in the 1840s. Joseph Dubonnet took part in a competition run by the French government. The goal of that competition was to create something that would make the French Legionnaires in Africa drink their daily portion of quinine.

Quinine is an effective remedy against malaria, but its taste is bitter and quite unpleasant. So, to hide this bitter taste, Dubonnet added herbs, spices, and a bit of Brandy.

Combined with the red wine base, the taste had been turning out not only good enough but actually delicious.

Dubonnet was an instant success. First as medication and later on as a leisure drink. And even today, Dubonnet has a dedicated fanbase, with Queen Elizabeth II being the most notable one.

In 1976, Pernod Ricard bought the company. This transfer of ownership went along with a re-popularization campaign. The most popular marketing slogan of Dubonnet is still known across the whole of France:

This tagline roughly translates to "It's nice, it's good, it's Dubonnet". And if you're visiting France, watch out for this phrase on the walls of older houses.

The taste of Dubonnet

The taste of Dubonnet is comparable to other fortified wine products like Sweet Vermouth.

It is a cross between a Port or Sherry and a herbal liqueur that also adds a slightly bitter note to the drink. The wine is sweet with an almost syrupy consistency and only contains about 15% ABV.

If you decide to drink it straight, you can taste a variety of herbal ingredients like thyme, rosemary, fennel, anise, and nutmeg. And it also carries notes of orange zest, cacao, and earthy flavors.

How to serve it

Dubonnet should either be served chilled as an aperitif, digestif poured in a Sherry or Port wine glass, or you mix it into a cocktail.

When drunk neat, the ideal temperature for Dubonnet is 10°C. Sometimes it's also served on the rocks, but the ice dilutes the taste and waters the drink down too much.

Among all the Dubonnet cocktails, like the Dubunnet Manhattan or the Napolean, none is as beloved as the cocktail the British Royals like to drink.

Queen Elizabeth II and Queen Mum enjoy(ed) Dubonnet on a daily basis. Queen Elizabeth II favors a combination of two-thirds Dubonnet to one-third Gin every day before her lunch. The ingredients are mixed and served over two ice cubes and a slice of lemon.

Her mother chose a similar combination. However, apparently, she preferred a tiny bit more Dubonnet in her drink; -more like 70% to 30%. And there's even a cocktail named after her - the Queen Mother.

How much is Dubonnet?

In the US, a bottle of Dubonnet sells for $15 per bottle. In Europe, especially in France, you can get it for around 8€.

How much alcohol is in Dubonnet?

Dubonnet contains 14.8% ABV in France. The US version is significantly stronger and clocks in at 19% ABV.

What is Dubonnet and Gin called?

Can you drink Dubonnet straight?

You can drink Dubonnet in cocktails or straight. Either way, Dubonnet should be served chilled as the ideal drinking temperature is at 10°C.

Dubonnet was first produced by Joseph Dubonnet. In 1976, the company was sold to Pernod Ricard. In 1993, Heaven Hill purchased Dubonnet and is now in charge of the production of the popular fortified wine.