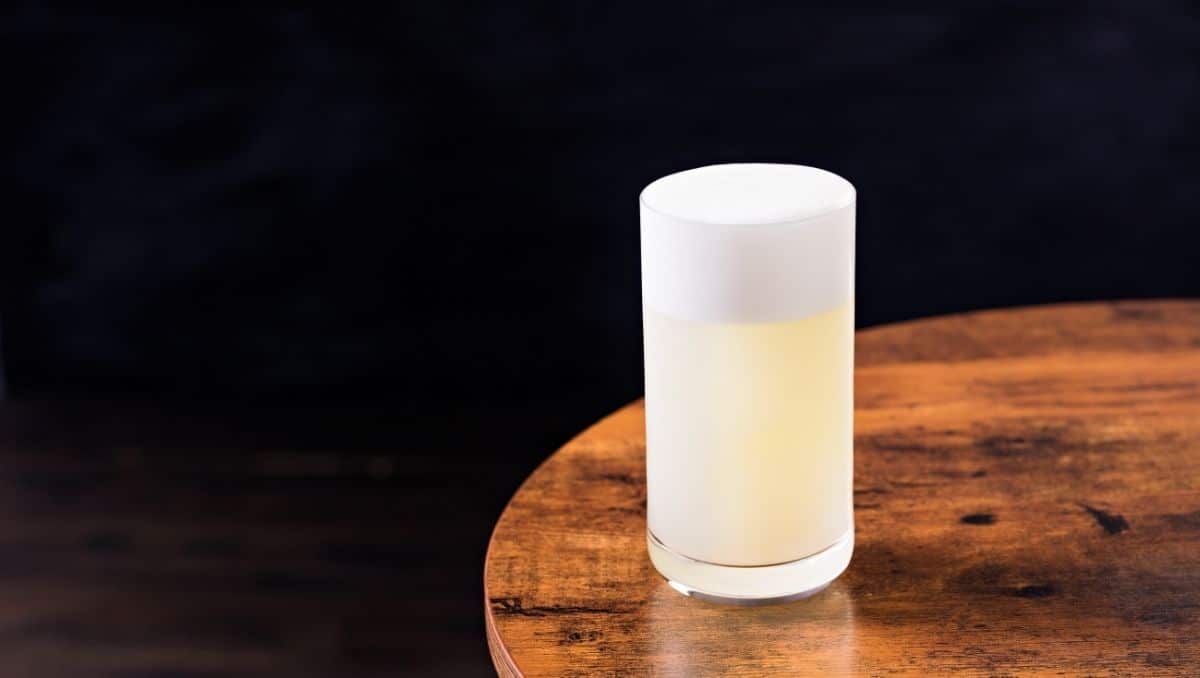 The Gin Fizz is a classic cocktail made of Gin, lemon juice, simple syrup, egg white, and cold soda water. A delightfully foamy yet sparkling and refreshing Gin cocktail.

A Fizz is an own category of cocktails. They're closely related to Sour cocktails, and, usually, you only need to add a splash of bubbly soda water to create these extra refreshing drinks. A classic fizz features a spirit, a citrus component, syrup, and soda water. And the Gin Fizz is also closely related to the Tom Collins cocktail. However, there are some small but significant differences.

The main difference is probably that a Tom Collins is served without egg white, whereas the Gin Fizz usually has this foamy head created by shaking it with egg white. And the preparation is different, as well. A Gin Fizz commonly needs to be shaken. -Especially when you want to achieve that foamy egg white on top. The Tom Collins, on the other hand, is commonly stirred and then strained over ice. Details that certainly make a difference.

History of the Gin Fizz cocktail

The first time ever that a Gin Fizz recipe got printed was in the famous cocktail book of Jerry Thomas - The Bartenders Guide. That was back in 1876, a starting point for the Fizz cocktails. It took a few years until the cocktail gained traction. But in the early 1900s, the Gin Fizz cocktail became more and more popular.

Traditionally the Gin Fizz was served in a small glass without ice. The egg white in the mix was the primary difference to the Tom Collins cocktail, which got published in the same book. The unusual and refreshing blend also led to many other closely related recipes. I listed some of those related cocktails for you below.

Nowadays, the Gin Fizz gets served on ice in Highball or Tom Collins glass, topped up with soda water, and garnished with lemon peel.

Egg white in a Gin Fizz

The initial key differentiator between a Gin Fizz and a Tom Collins, the egg white, adds texture to the drink. Not only the frothy top but the whole cocktail obtains a smooth mouthfeel.

However, nowadays, the Gin Fizz is often served without the egg white component. Some people simply don't like the idea of raw egg white in a drink. If you're one of them, perhaps out of health concerns, let me tell you that egg white in a sour cocktail is actually harmless. Not only does the alcohol kill most of the bacteria, but the lemon juice is also "cooking" the egg white. Similar to the process of preparing raw fish with lime in ceviche - for those who are familiar with that.

If you're vegan, there's a perfect alternative for using egg white called Aquafaba. I also wrote an article on how Aquafaba compares to egg white when used in cocktails.

Best Gin for a Gin Fizz

The Gin Fizz is a fabulous cocktail to experiment with the Gin base. And really, there are so many different types of Gin available to experiment with. From traditional Dry and London Dry Gins to more modern New Western Gins, there are endless possibilities. Yet, my recommendation is Bobby's Gin, a Gin distilled by an expert Genever producer.

I mentioned the Tom Collins cocktail quite a lot in this post. That is because the recipes for both drinks are that similar. It feels impossible talking about one without the other. But there's more, of course. Due to the popularity of the Gin Fizz, other famous classics like the Ramos Gin Fizz and the Sloe Gin Fizz evolved.