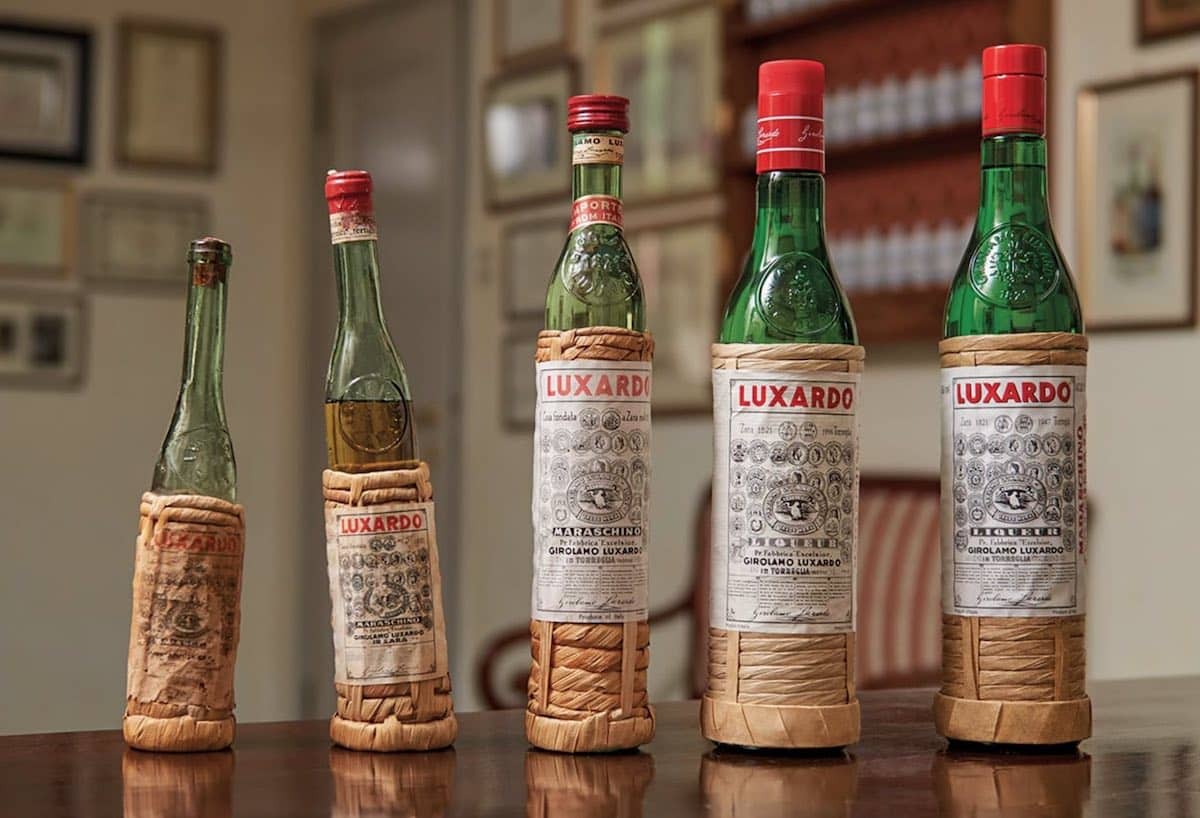 The history of Maraschino

Maraschino is one of the most used cherry liqueurs in cocktails and a valuable asset in the world of mixology. Read the whole story behind the Italian liqueur.

As with many European liquors, the history of Maraschino liqueurs goes back a long time. Not as far as the average Amaro - usually based on medical elixirs dating back many hundred years, but still.

Also, Maraschino can look back on an eventful history since its invention in the mid-18th century.

Usually, Maraschino refers to a clear liqueur with its taste best described as a mixture of cherry and almonds. Sometimes Maraschino also means the cherry variety said liqueur is made from - either in their natural form or candied to use as a cocktail or dessert garnish.

Yet, it was the liqueur that brought the term international recognition, and that hasn't changed until today. Thanks to its uniquely dry, slightly bitter almond-cherry flavor, it is a favored cocktail ingredient and a staple in cocktail bars across the globe.

If you want to know more about the liqueur, how you can use it in cocktails, or about the cherries, I recommend also reading these articles:

The straw around the bottles

Before we get to the History of Maraschino, there's one more iconic thing that cannot go unmentioned when writing about the liqueur - the original packaging.

Today, this cherry liqueur comes in modern bottles with elegant labels. However, in the mid-1900s, it had a very different look. - Regardless of the brand, all had a hand-woven straw basket. Many wonder what that was about, and the answer is simple and not very glamorous:

Since Maraschino was such a popular export, the bottles had to travel far, which was not as easy then as it is today. So, pure and simple, the straw basket was for protection during transport.

But now, let's look at the history of the popular cocktail ingredient.

Many people think Maraschino is a brand or at least that there's this one product that is the original - Luxardo. Yet, while Luxardo certainly has a point in calling themselves the original, it is not the entire truth.

Liqueur made from Marasca cherries has a century-long tradition in the Dalmatian region. Today, Dalmaria is part of Croatia, back then under the administration of the sovereign Republic of Venice.

The first to produce Maraschino at an industrial scale was the Venetian merchant Francesco Drioli. He had managed to perfect a distillation technique a pharmacist from Bergamo and café owner Giuseppe Carceniga from Zadar had developed and used to make liqueur from Marasca cherries since 1730.

Thereupon, Drioli founded his Fabbrica di Maraschino Francesco Drioli in 1759. Within less than 20 years, he had made a name for himself and his cherry liqueur all over Europe.

England was among the first to import Drioli's Maraschino in larger quantities. By 1779, one could find advertisements and comments in newspapers praising the liqueur from Zadar as having "the most exquisite flavour". At that time, it was a product solely reserved for the nobility and the elite.

In 1804, Austrian Emperor Francis II granted Drioli's factory the prestigious Imperial Regia Privilegiata (privileged imperial rulership). That entitled them to use the royal coat of arms on its label. Britain and Italy followed.

By the end of the 18th century, Francesco Drioli was at the height of his success. But with great success comes great competition and with the reputation of Maraschino continuing to grow across Europe, other producers emerged.

The Maraschino Industry of Zadar

In 1821, Girolamo Luxardo entered the picture, and in 1861 Romano Vlahov followed. Led by Drioli, together with some other, lesser-known distillers, they formed the l' industria del maraschino di Zara - the maraschino industry of Zadar.

For the better part of a century, things went fairly smoothly. There was more than enough demand for the renowned cherry liqueur to keep the entire industry busy. Over time, recipes, along with distillation techniques and trade secrets, were passed down from generation to generation. Even during World War I, they managed to keep up production.

However, the end of WWII should also turn out to be the end of Maraschino in Zadar - the end of an era. The bombing of Zadar and the independence of Yugoslavia forced many businesses out of the region. Among them were the distilleries of Drioli, Luxardo, and Vlahov.

The three key players of the industry sought refuge in Italy and rebuilt their now-modernized factories near Venice (Drioli), Padua (Luxardo), and Bologna (Vlahov). Within less than a year, everything was set up for a fresh start in Italy. By 1946/47, they all were back in business.

Vittorio Salghetti-Drioli ran the Drioli-business in the sixth generation and until the 1970s. Little is known about the period between 1946 and 1970. However, after more than 200 years and for unspecified reasons, the oldest Maraschino company stopped producing its liqueur and went out of business.

There is even less information on what became of Vlahov, but the company, as well, was shut down eventually.

After Vittorio Drioli's death in 1974, his heirs built a new distillery (DI. VE. MI. -short for Distillerie Venete Mira Spa) and wanted to make use of the old recipe. They stopped this endeavor in 1980 and dissolved the company that same year.

What's left of the once so thriving liqueur empire is extensive documentation preserved in the States Archive of Zadar. The old books and other paperwork proved not only relevant to comprehend the history of Maraschino. They contain invaluable accounts of historical events that have impacted the region during the course of more than 200 years.

We might not know what became of Drioli and Vlahov. What we do know, though, is how things went for Luxardo, as it is the only brand of the legendary Maraschino industry of Zadar that survived.

The fifth generation of Luxardos had rebuilt their modernized factory in Torreglia, a village in North-East Italy. Within a few years, they had re-established their brand and -with Drioli and Vlahov out of business -their product soon was known as the Original Maraschino liqueur.

Today, Girolamo Luxardo S.p.A. is the number one manufacturer of the popular cherry liqueur and is run by three generations of Luxardos.

However, not the entire heritage of the other members of Zadar's Maraschino industry was lost. Everything that once was confiscated from the businesses and unified into a new enterprise with a new factory.

They have been producing the cherry liqueur in Croatia under the name Maraska in the former facilities of Luxardo since 1946. So, technically, they can also be seen as Original (this reminds me a lot of the Havana story).

Of course, quite some other producers wanted a piece of the cake and ensured that today, we see a whole range of Maraschino brands to choose from in liquor stores.