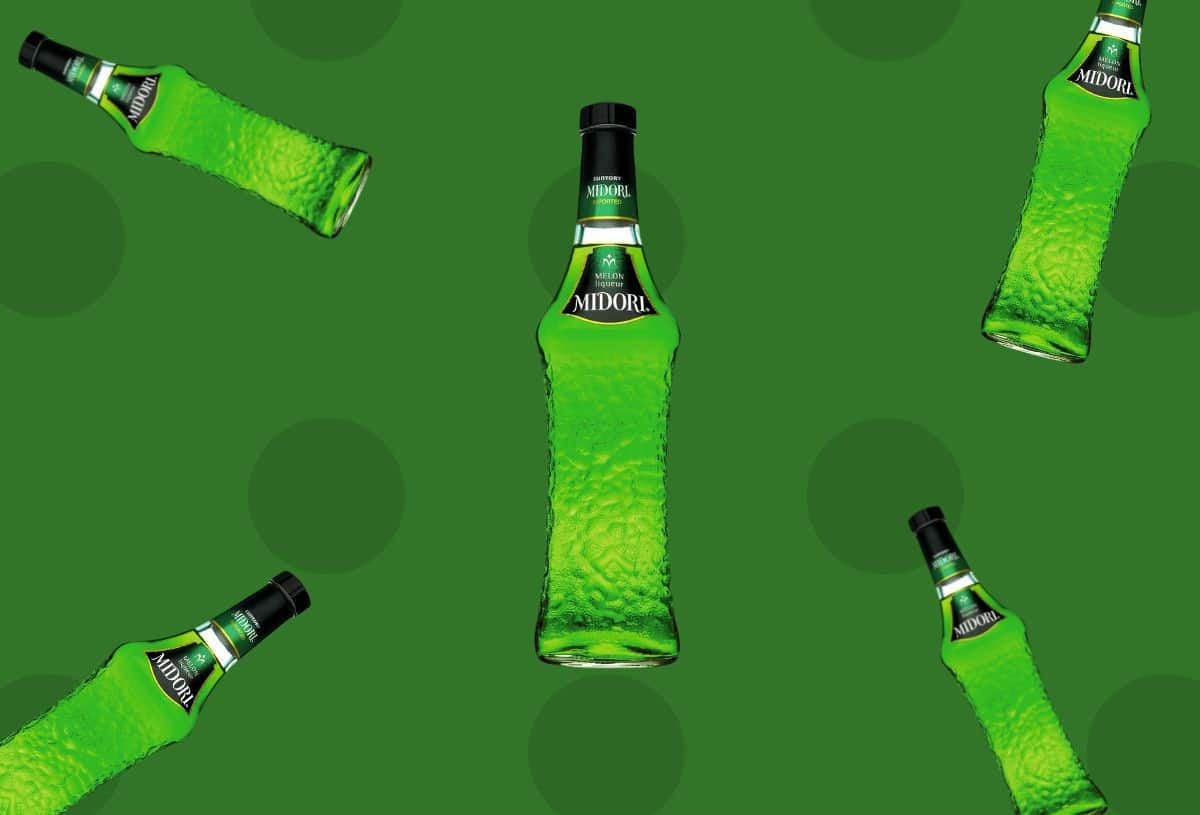 Midori Melon Liqueur is a fancy 80s beverage from Japan. It fell into oblivion when overly sweet liqueurs went out of fashion. However, now it's coming back in craft cocktails.

Many people - including barkeepers - are not overly enthusiastic when confronted with Midori Melon Liqueur. Its sweet and vibrant green liquor is not fashionable in modern mixology.

Yet, you can find the Japanese liqueur on the shelves of bars since the 80s. And now it's gaining traction again.

The flavor of Midori is unique. So there's next to no competition, which paved the way to a respectable comeback in the last few years. Let's find out why.

What is Midori Liqueur

Midori is a melon Liqueur from Japan made by Suntory, a famous producer of Japanese Whisky. Midori means green in Japanese, and the liqueur truly delivers on that.

It also has a sweet taste with a subtle melon flavor. These characteristics made it more of a typical cocktail ingredient than a liqueur that you would drink as a shot, similar to Safari liqueur.

For a very long time, the creators and owners of Midori guarded the recipe closely. Which probably wasn't too difficult because not many seemed to be interested.

However, when the liqueur gained popularity again, more and more people started to wonder how it was made. And to promote and introduce Midori to the broader public, Suntory revealed some secrets and details of its iconic bar ingredient.

Midori consists of two different types of melons, the yubari and musk melons. Both fruits are similar to a Cantaloupe, but can only be found in Japan. One in the North and one in the South of the country.

Yubari melon comes from Yubari city on the Northern part of the island. The soil there contains lots of volcanic ash, providing a high nutritional value.

Musk melons originate in the Shizuoka and Aichi provinces. Those provinces are located south of Tokyo and are famous for creating high-quality melons.

Some of these melons sell for up to $200 per piece. Not too bad for a single fruit.

Melons from Yubari City usually get harvested during the summer months, in June and July. The pulp is frozen immediately after the harvest to preserve flavor and freshness.

This process is crucial for the quality of Midori because its key components are two products made from the frozen Yubari melon pulp:

Yubari infusion and Yubari distillate. Both of them are created by being processed with a high-grade spirit.

For the Yubari infusion, an added enzyme helps to break the pulp, and the addition of sugar emphasizes the subtle melon flavor.

The Yubari distillate, on the other hand, is created in a low-pressure still. The only ingredients used are frozen melon pulp, high-grade spirit, and water.

The third component of Midori Melon Liqueur is another infusion of musk melons produced in the Shizuoka province.

When mixing the three base components, the resulting product has 59% ABV. It is a rich and flavorful spirit, almost clear with a slight shade of orange created by the melon fruit pulp.

This base spirit then gets transported to France and Mexico for further refinement. By blending with Louis Royer Cognac and cane sugar, the liqueur is finally brought to 20% ABV.

Finally, the iconic green color comes from adding artificial green food coloring. The green color and the texture of the Midori bottle intend to resemble the musk melon, one of the main ingredients.

Midori is the result of a lifelong dream of Suntory founder Shinjiro Torii, who always wanted to create a colorful western-style Liqueur.

First released in 1964, the product name was Hermes Melon Liqueur. When the Hermes Liqueur became one of the stars of the 1971 IBA Cocktail Championship in Tokyo, the idea grew to bring it to the American market. That was when they changed the name.

The liqueur was renamed Midori (ミドリ), meaning "green" in Japanese, for a smoother introduction to the American market. And what an introduction it was.

Launched at the legendary "Studio 54" in New York, John Travolta was one of the first persons to consume Midori. The liqueur immediately gained traction and created a big hype in the 80s.

Until 1987 Midori Melon Liqueur was exclusively produced in Japan. But when it became such a success, parts of the production moved to Mexico and France.

Today, 80-85 percent of the production volume of Midori comes from Mexico. France is producing the remaining 20-25 percent.

In 2013 a new version of Midori containing less sugar was released. That made it taste less sweet and more suitable for modern drinks.

Modifying the recipe was crucial for a successful comeback of Midori. Especially in a time when people consume more consciously than in the 80s. The bottle design got slightly updated as well and is now frosted glass.

Midori is the first choice for cocktails containing melon liqueur. And because Midori was such hype, there were various recipes incorporating Midori. Probably the best-known amongst them are the Japanese Slipper and the Midori Sour.

The Japanese slipper is a three-ingredient cocktail invented by Jean-Paul Bourguignon in Melbourne in 1984. In Australia, this drink is still an icon and on the menu in many bars. If you want to try it, here's what you need.

Put the cherry into a chilled Martini glass. Put crushed ice into your cocktail shaker and add all ingredients. Shake well and carefully strain the cocktail into the glass. Garnish it with a slice of honeydew melon, and it's ready to be served.

A Midori Sour is a refreshing cocktail and easy to make at home. You can mix it in a glass. You don't need a cocktail shaker or any other bar tool. With its bright green color and sour taste, it is a perfect summer cocktail.

Pour vodka, lemon & lime juice, and Midori into a highball glass. Add some ice and stir it well. Finally, top it up with soda and garnish it with a lemon slice.