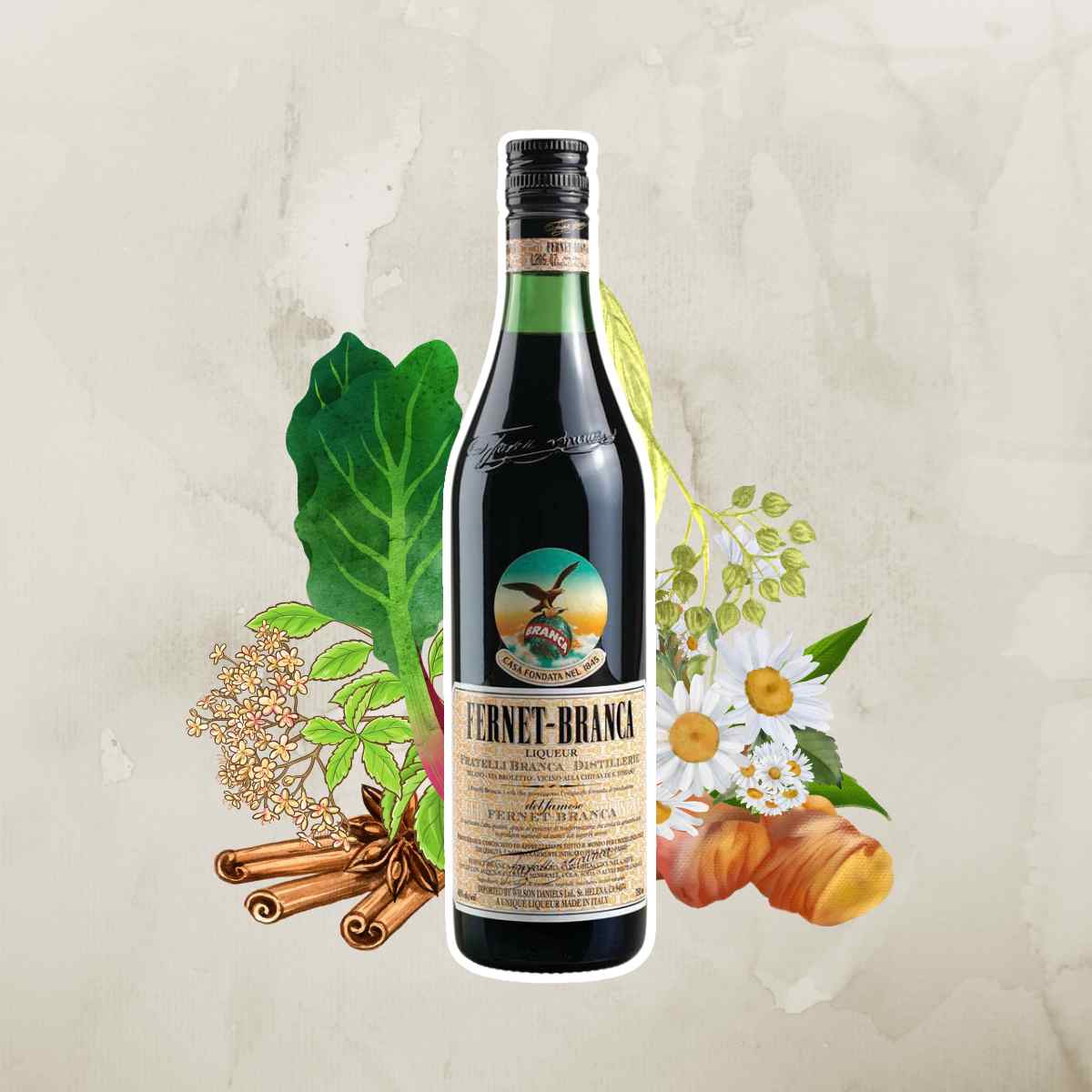 A Guide to Fernet Branca

Fernet Branca is an Italian herbal liqueur commonly consumed as a digestif. It's among the best-known Italian bitters and is especially popular in Argentina.

Fernet Branca is a liqueur of the Amaro category. Amaros are Italian herbal liqueurs and popular digestif. More precisely, Fernet-Branca is part of a subtype of this category - the Fernets. And it has managed to gather something almost resembling a cult following in some places.

The bitter herbal liqueur is particularly popular in Argentina. The South American country is responsible for no less than 75% of the world's Fernet consumption. Most of it goes to the capital, Buenos Aires, and the province with the same name.

But what makes Fernet-Branca so special? What is the difference from other Amari? Let's have a look at the story of this interesting herbal liqueur.

Contents hide
What is Fernet Branca?
Quick Facts
Difference to other Amari
How does it taste?
History of Fernet Branca
Export to Argentina
Lots of Love from San Francisco
How to drink Fernet Branca

What is Fernet Branca?

Fernet Branca is the best-known representative of its category and contains the essence of 27 different botanicals. Like many other Amari, it once was a medicine. In this case, the herbal liqueur's purposes were curing Cholera and relieving menstrual cramps. However, that's long in the past, and today it's consumed for pleasure, usually as a digestif.

Unlike many other Amaros, Fernet Branca ages in barrels before getting bottled. For this, the herbal liqueur matures in Slovakian and Eastern European oak barrels for a whole year. That aging process brings oaky notes of the barrel into the liqueur and intensifies the other flavors.

The recipe is a big secret. However, the brand reveals that cinchona, rhubarb, iris, myrrh, saffron, chamomile, linden, cinnamon, zedoary, and galingale are among the ingredients.

Difference to other Amari

Amari, in general, are herbal liqueurs made with various roots, plants, and spices. Fernet is an Amaro subtype.

It commonly has a higher ABV than other Amari - usually around 40%. Yet, the main difference is that Fernet is less sweet. In fact, some types are not sweet at all.

There's also a mint-forward version of Fernet available called Branca Menta. This version is sweeter, lower in ABV, and thus, easier to sip.

Fernet Branca has a truly unique taste. Poured into a glass, you will see the dark brown and red colored liquid that holds aromas of peppermint, licorice, and spice.

The first sip is strong and very minty. You will get a hint of mint tea, chamomile, and roots. The aftertaste is relatively bitter, with lots of minty notes and a touch of fruity prune.

Overall the taste is very herbaceous and bitter, with only a slight sweetness. If you're looking for an alternative to this liqueur, you can find suitable substitutes for Fernet Branca here.

In 1845, Bernardino Branca developed the complete recipe and distilled it in the Fratelli Branca Distillery. His herbal creation was known for its medical properties and soon gained vast popularity.

Only a few years later, the brand started heavily marketing the product nationally- on a scale that might not be impressive today but was far above the standard for the mid-19th century.

In 1893, the brand's famous logo was designed by the Italian artist Leopoldo Metlicovitz. Until today, the logo, which shows an eagle, a bottle of Fernet Branca, and a globe, is famously featured on the label.

By 1907, Fernet-Branca began exporting to Argentina. The initial objective was to supply Italian immigrants with their bitter liqueur. What happened then seems nothing short of a miracle:

The liqueur became so popular that only 18 years later, the brand opened a distillery in Buenos Aires. It was and stays the first and only distillery outside Italy until today. And the love for Fernet only grew from then.

Today, 75% of the world's Fernet consumption is attributed to Argentina. No wonder, as it's part of their national drink - the Fernandito, or Fernet con Coca. It's a mix of Fernet Branca and Coke you can get everywhere in the country.

Lots of Love from San Francisco

Apart from Argentina, Fernet was relatively unknown outside Europe for more than a century. That changed in the early 2000s when the herbal liqueur was hyped in parts of the US.

Especially in San Francisco, it has been receiving more and more love since the turn of the century. According to Eduardo Branca, heir of the family business, in the 90s, their back-then portfolio manager Antoinette Cattani went from bar to bar in California to convince owners to carry the brand. Doing that, she used the catchphrase Fernet-Branca is a bong in a bottle.

The bold strategy worked, and the herbal liqueur became a cult in San Francisco. Today, the city is responsible for 35% of the total Fernet Branca sales volume and consumption in the US.

The dry herbal liqueur also gained traction amongst craft bartenders everywhere. The so-called "bartender's handshake" is a popular shot when groups of bartenders meet up.

How to drink Fernet Branca

Bartenders, especially the folks from San Francisco, prefer the liqueur neat and serve it as a shot. However, that is not the traditional Italian way of drinking it.

Like many other Amari, you should serve Fernet Branca over ice with a slice of lemon or orange. If you don't want to drink it neat, you can also mix it with other ingredients in a cocktail or highball.

The most popular beverage is doubtlessly the Fernandito. This simple two-ingredient drink is the national cocktail of Argentina and the principal reason for the high consumption of Fernet in the country.

Other classic cocktails like the Hanky Panky also make use of the flavorful liqueur. Invented in the 1920s by Ada Coleman, it is a perfect drink to experience the complex flavors of Fernet Branca. Other popular Fernet Branca cocktails are the Fernet Sour and the Toronto cocktail.