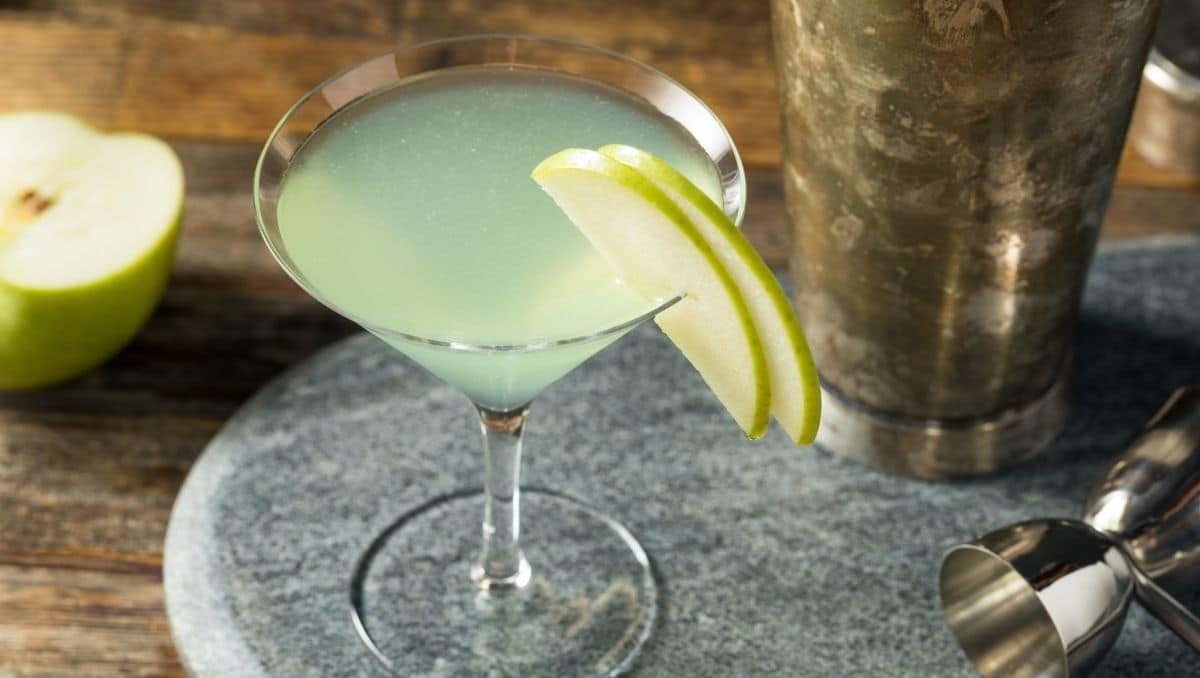 The Appletini once was an ultra-hyped cocktail. But what made this bright green-colored Apple Martini based on Vodka and apple-flavored ingredients so famous? And where did it go?

The last time you saw an Appletini on your favorite bar's menu most likely was a while ago. But when you go a couple of decades back, this green drink dominated clubs and bars.

It was a phenomenon that's hard to explain. And it all started when a restaurant in West Hollywood came up with a twist on a classic Martini.

What happened next is hard to believe. The new drink on the menu became tremendously successful.

So successful, in fact, that, at one point, the bar had to take it off the menu. Because people could not taste how much alcohol was in it, they started to drink way more than they should have.

However, taking it off the menu didn't stop the popularity of the Appletini. And soon, the cocktail was a crowd favorite all over the United States.

Learn more about the cocktail and whether it was really always a girly drink.

Ingredients of the Appletini

The Appletini's two main components are Vodka and sour apple liqueur in a ratio of 2:1.

I like to stick to the original and use Ketel One Vodka and DeKuyper Pucker sour apple schnapps for an Appletini. But if you already have your favorites, there's no reason not to go with them.

Absinthe has not been part of the original recipe. The anise-flavored spirit helps to balance the sweetness by bringing in just a little of an edge and some subtle herbal notes.

Further, lemon, lime, and simple syrup are necessary for dilution and balance.

History of the Appletini

The history of the Appletini starts in 1996 at Lola's Restaurant in West Hollywood.

When owner and manager, Loren Dunsworth, was approached by a sales representative of Ketel One Vodka, she asked one of her barkeepers to get creative with it.

Bartender Adam Karston mixed up a pretty simple drink. Made of equal parts Vodka and DeKuyper Pucker sour apple schnapps, he rounded it off by adding a splash of a sweet-and-sour mix.

The initial name of his creation was "Adams Apple Martini", a wordplay referring to its inventor's first name.

Little did he know that he had invented one of the most famous drinks of the late 90s and early 2000s.

The cocktail was an instant crowd favorite at Lola's. And more than once, people became unintentionally excessively drunk because this sweet and sour creation does an excellent job of hiding harsh alcoholic notes.

But this overly-easy-to-drink trait also led to the fact that the green apple cocktail never managed to be seen as a "cool" drink.

Instead, the Appletini often is an expression of unmanliness in movies and series.

Whether Zach Braff in Scrubs or Jon Cryer alias Alan Harper in two and a half men, the Appletini is always accompanied by a feminine touch.

But has the drink always been girly?

The Appletini - A girly cocktail?

The reasons why the cocktail used to be seen as feminine and girly are simple. Through the sweet and sour apple taste, you can hardly taste the alcohol.

It's easy to drink and indeed ordered more frequently by women because their tastebuds are more sensitive to certain bitter flavors.

Nevertheless, in reality, many men also -some openly, others more discreetly- loved the Apple Martini.

Over time, though, just as with other unbalanced cocktail recipes, the Appletini evolved, and today, you can find many different recipes. -Some are far from being considered girly.

By using fresh ingredients and a better balance between sweet and sour, you get a more refined version of an Appletini. -Like when applying an Absinthe rinse to this Martini twist, it becomes even more complex and mature.

Over time countless variations on the classic recipes appeared. The most simplistic one only asks for two ingredients - a mix of two parts Vodka and one part apple makes the entire drink.

For the apple part, you can use anything. -From apple juice to cider and the DeKuyper Pucker sour apple schnapps.

Further, you can enhance the base recipe can then with additional ingredients. Sweet and sour mix is a popular choice.

But you could also add Dry Vermouth or a shot of Cointreau to make your Appletini. A common variation called Rumpletini replaces the Vodka part with white Rum.

Other less popular twists also include Whiskey or Whisky and also vanilla liqueur. There's even an almost dessert-like variation, made of Tequila, butterscotch schnapps, and apple cider.

And if you want to try something else but stick to Vodka as base, here's a list with our favorite Vodka cocktails.