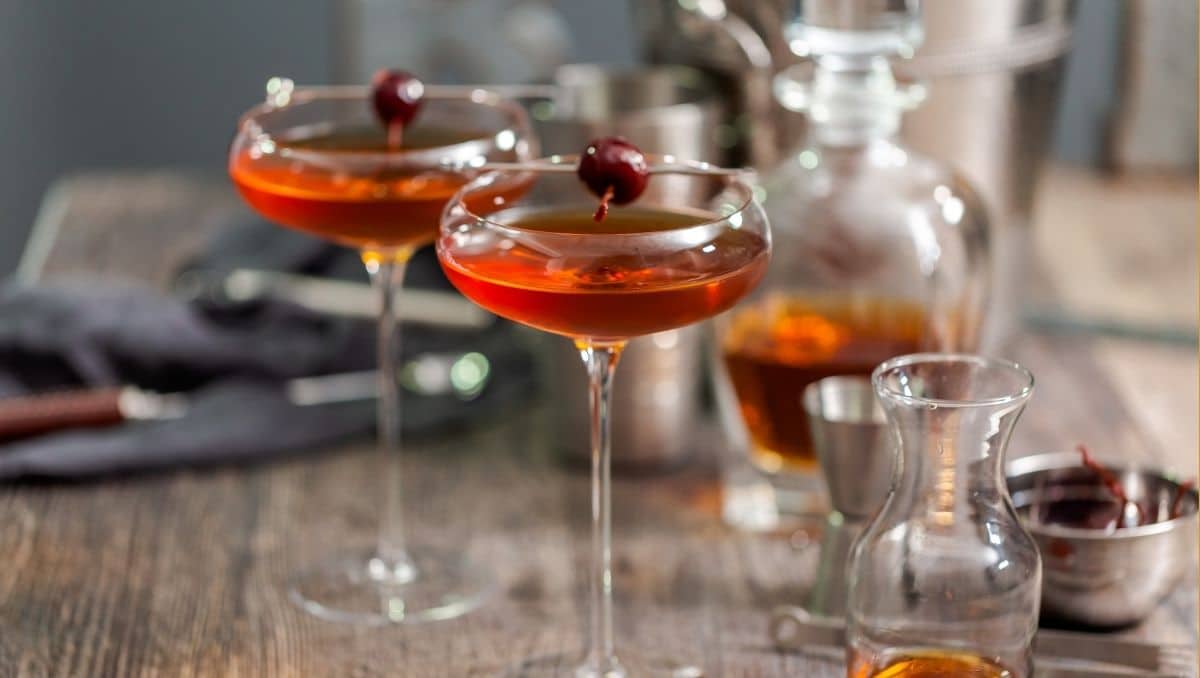 As another drink named after a borough of New York City, the Brooklyn cocktail stands in the shadow of the more famous Manhattan or Bronx cocktail.

The Brooklyn is a classic cocktail made of Rye Whiskey, Dry Vermouth, Amer Picon, and Maraschino liqueur. And when garnished with a Maraschino cherry, the Brooklyn cocktail looks similar to other traditional cocktails like the Manhattan or Martinez.

Also, during the last couple of years, more and more riffs on the Brooklyn cocktail appeared in bars and home bars. These riffs are mostly named after neighborhoods in Brooklyn, NYC.

The original recipe calls for Amer Picon, a bittersweet, Belgian aperitif made of orange and gentian. Unfortunately, this liqueur is quite hard to get outside Europe.

However, if you can't get it, there are options to replace Amer Picon that still make for a pretty decent Brooklyn cocktail.

If you don't have any preferred brands and are unsure what to get, we like to use Old Forester Rye, which is excellent value for money.

Our favorite Dry Vermouths are Noilly Prat or Dolin Dry, and for the Maraschino liqueur, I recommend going with Luxardo.

How to substitute Amer Picon

Amer Picon is a bittersweet, orange-flavored Belgian liqueur. Due to its limited availability, bartenders came up with various ideas to replace it without changing the overall identity and character of the cocktail.

One popular take is replacing Maraschino and Amer Picon with one single ingredient. Amaro Ciociaro works really well and creates an enjoyable cocktail quite close to the original version.

Other alternatives only replace the Amer Picon:

The taste of Amer Picon is herbal and citrusy with intensive orange notes. Therefore substituting it with a similarly citrusy Amaro is possibly the best way to replace the original ingredient. Amaro Tosolini, Amaro Ciociaro, or Bigallet China-China Amer are all excellent options.

However, if you don't want to invest in such a specialized liqueur, there's also a more practical approach.

You can replace the Amer Picon part with two dashes of Angostura bitters. That seems far off the original recipe. But, in this case, it creates a surprisingly similar drink.

History of the Brooklyn cocktail

The first time the Brooklyn cocktail appeared in written form was in 1908. Jacques Straub published the drink in his cocktail book Drinks.

With Amer Picon being so difficult to get, it eventually vanished from bar menus. Only the increasing globalization brought it back in some places.

Also, Straub's original recipe is different from the one he published. A misprint turned Sweet Vermouth into Dry Vermouth. But most bartenders continued creating the cocktail out of his book. Therefore, today, that version is the standard recipe for a Brooklyn cocktail.

Yet, should you intend to mix a Brooklyn cocktail as Straub envisioned it, replace the Dry with Sweet Vermouth in the recipe below - the ratios remain the same.

Other cocktails named after NYC boroughs

No doubt, the Brooklyn cocktail is inspired by the Manhattan cocktail. And obviously, New York City has more boroughs worthy of lending their name to a cocktail.

For instance, the Bronx Cocktail is an easy-to-make three-ingredient cocktail mixed with Gin, Vermouth, and freshly squeezed orange juice.

The IBA used to list it for quite a long time, and it was very famous in the 1930s. A ranking from 1934 even rewarded it as the 3rd most popular cocktail worldwide.

The Queens Cocktail is also a three-ingredient cocktail based on Gin and Vermouth. But instead of orange juice, its creator, Harry Craddock, decided to use fresh pineapple juice instead.

Furthermore, Staten Island has its own recipe, at least if you want to call it a recipe. The simple formula asks for an equal amount of Malibu Rum and pineapple juice.

The result is a sweet and unbalanced cocktail reminiscent of a subpar Piña Colada. That makes the Staten Island is my least favorite one amongst all NYC-inspired cocktails.