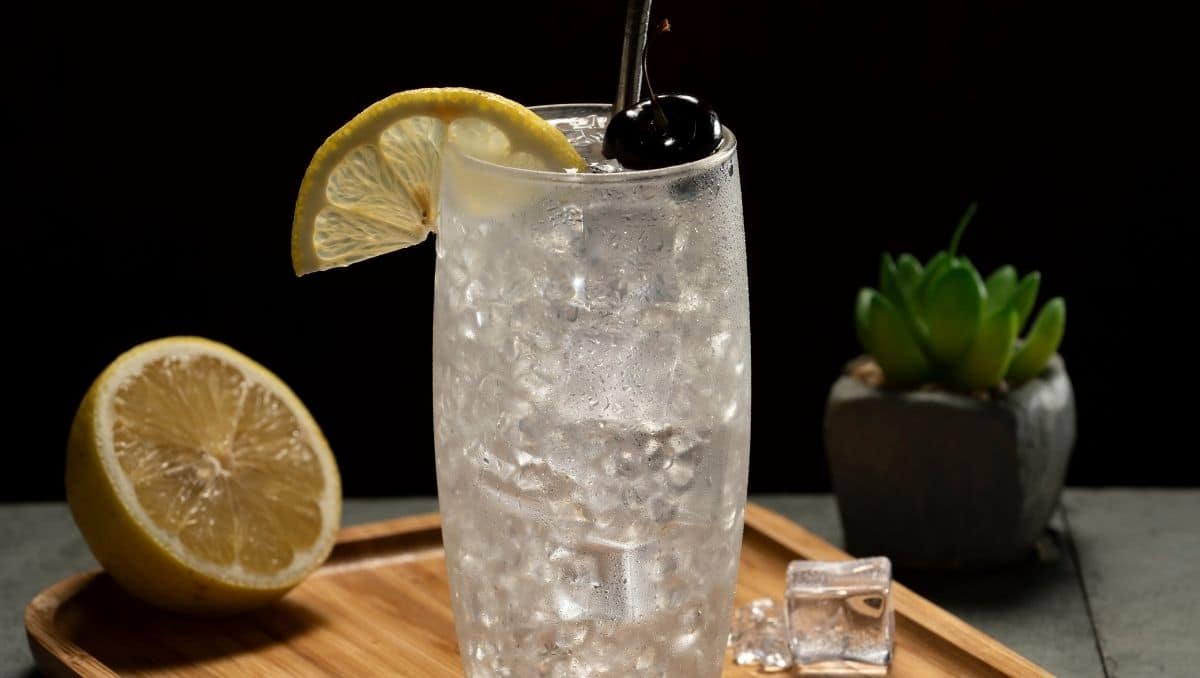 A John Collins is a tart cocktail based on Gin, lemon juice, sugar, and soda water. The drink usually is served on ice in a Collins glass, named after the cocktail itself.

A John Collins is a tart cocktail based on Gin, lemon juice, sugar, and soda water. The drink usually is served on ice in a Collins glass, named after the cocktail itself.

Collins cocktails are available in a large number of variants. But it all started with just two of them - The John Collins and the Tom Collins.

Apart from those two fellows -each based on Gin- other drinks have joined the clan over time.

and many more are part of the Collins family.

For all of them, the recipe template always stays the same: base spirit, sugar, lemon juice, and carbonated water.

But back to the main act: if you now want to know more about the history of the drink and how you make this beautiful cocktail at home, you came to the right place.

And if you're interested in a detailed comparison of the John and the Tom Collins, head over to the article about the difference between a John Collins and a Tom Collins.

Ingredients of the John Collins

Collins cocktails are a refreshing mix of base spirit, lemon, sugar, and soda water.

To keep it nice and short, the Gin I prefer in the John Collins Cocktail is London Dry.

It's a classic choice and picking another type of Gin can sometimes even lead to a change of the drink's first name. A Beefeater or a Tanqueray are excellent options.

The lemon juice has to be freshly squeezed from ripe lemons to add that beautiful acidic punch and natural citrus flavor to the drink. Don't cut the corner with bottled lemon juice.

Regarding the sugar syrup, you can get that in a supermarket, but you can also easily make it at home for a fraction of the price. Check out this easy recipe for simple syrup.

And finally, there's the soda. Don't use a bottle that's been open for more than a day because you need some decent carbonation in your drink.

History of the John Collins cocktail

The history of the cocktail is hazy. But it is close to that of the Tom Collins Cocktail. A reason why many do mix up both drinks. So it's time to shed some light on this mystery.

A widespread and popular story is that the drink got created by a bartender with the name of the cocktail.

This Mr. John Collins is believed to have served guests in a London Hotel called the Limmer's Old House.

This establishment was a popular inn and coffee house in London's Mayfair district from 1790 - 1817. A limerick by Charles and Frank Sheridan makes this story immortal:

That would suggest that the origin of the drink must be before 1817.

However, the first time the cocktail appeared in written form was more than 50 years later, in 1869, when the Steward and Barkeeper's Manual decided to feature the John Collins.

The John Collins drink originally contained Jenever, a Gin variant from the Netherlands, as the base spirit.

Cocktail historian David Embury once explained that "The original Collinses were always made with Gin but, strangely enough, never with London dry Gin."

Difference from other Gin cocktails

The difference between Tom Collins and John Collins is solely the type of Gin used in the recipe. But there are other closely related Gin cocktails like the Gin Fizz, Gin Sour, and the Gin and Tonic.

The difference from a Gin Sour is that the John Collins strictly is made without egg white. And it contains soda water which makes for a more refreshing, almost lemonade-like drink.

In contrast to that, a Gin Fizz uses exactly the same ingredients as a John Collins. The difference here is in the details.

A Gin Fizz is chilled while shaken with plenty of ice. The resulting drink then should be served in a chilled glass without ice.

A John Collins, and all other Collins cocktails, are served on ice.

Also, the size of the drinks varies. While a typical Gin Fizz only consists of 8 ounces of liquid, the John Collins ranges between 14 to 16 ounces.

A Gin and Tonic, however, is something completely different. The G&T is a typical Highball drink consisting of only two ingredients - Gin and tonic water.