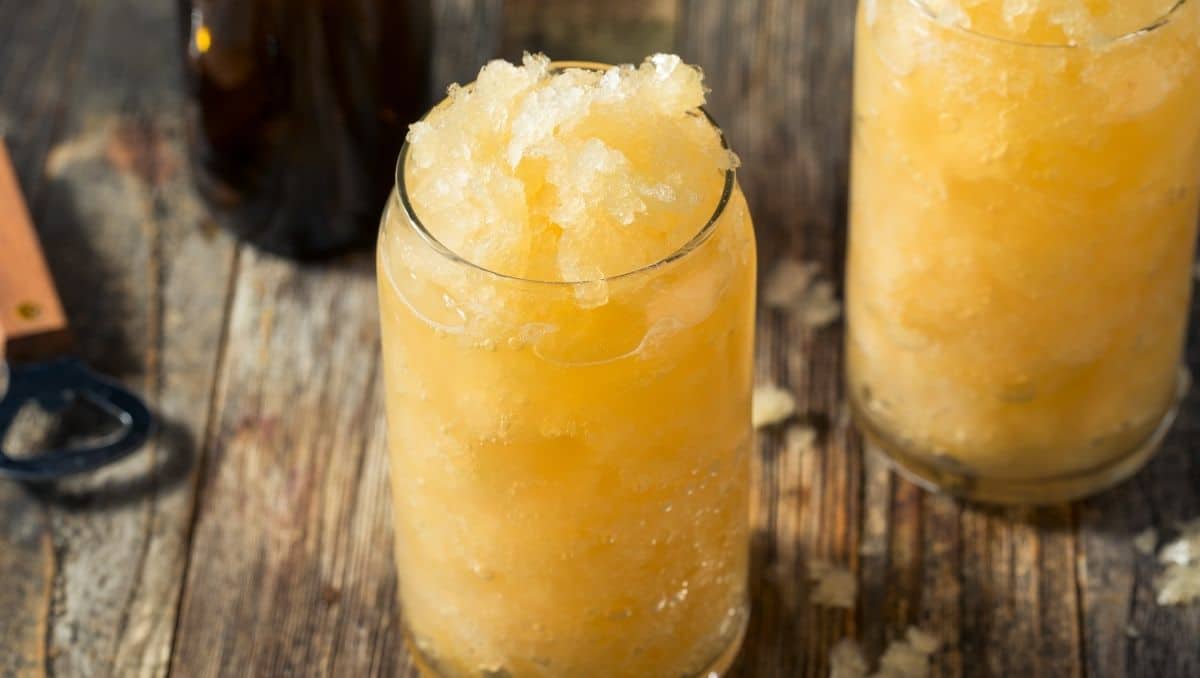 Beer Slushies are frozen beers, some with the addition of sweet and sour components. These slushies are a popular treat in Thailand, where they're also called jelly beer.

Beer slushies or jelly beer are a refreshing way to enjoy a beer on hot summer days. Even if you're a beer purist, you will probably like these semi-frozen treats.

If you are intrigued now and consider serving these at your next barbeque, make sure to follow our recipe to get the perfect jelly beers in your freezer.

The beginnings of jelly beer

The trend of serving beer slushies didn't start in America or Europe. It was in Japan that the first frozen beer slushies appeared.

The history of the jelly beer started in 2010 when famous Japanese brewery Asahi introduced their frozen Super Dry Beer poured from the tap at 28° F. It didn't take long until this ice-cold and slushy-like beer trended in Asia.

Around 2012, Thailand was one of the first countries to pick up on the idea and develop its own unique take on a beer slushy. Using "bia wun" (oscillating) machines, they produce their beer slushies with Thai beers like Singha or Chang.

These constantly rocking machines are barrel-shaped and filled with a mix of ice, salt, and water. Like that, they cool the beer down to 26°F. All the while, the pressure inside the beer bottles prevents them from freezing.

Jelly Beer in the US

In 2014 the trend came to the US. Thai restaurants throughout the country put the jelly beer slushies onto their menus and created a hype.

One of the first was Uncle Boons, an award-winning Thai restaurant located in New York City. And other places that also started to serve the frozen beer slushies around 2014 are Pok Pok from Portland, Oregon, and Sway from Austin, Texas.

How to serve a jelly beer

Jelly beers cooled in a bia wun are super easy to serve. Once the beer reaches the required temperature of 26°F, you simply take a bottle out of the machine, then shake and open it. The shaking initiates a crystalizing process which instantly turns your beer into a half-frozen beer slushy.

Which beer for making a beer slushy

Malt-forward beers are perfect for making beer slushies. That is because the bitterness of the beer intensifies once frozen.

And malt beers naturally have a sweeter and less bitter taste. A straightforward and obvious choice would be Thai Singha beer.

Hoppy beers can quickly turn very bitter. So be careful when choosing those.

Variations of the beer slushy

These days, there is more than one way to create beer slushies. Once the hype hit America, countless new recipes and methods to make beer slushies filled bar menus and the internet.

To accentuate your beer, you can add a sweet and sour part to it. For instance, using a bit of lime juice and simple syrup would be a basic option. Or you can add frozen chunks of fruit, semi-frozen fruit puree, and fruit juice.

For the flavored types of beer slushies, you typically need a blender and may want to freeze half of the beer. But there are many more ways to flavor your beer. If you want more details on this, check out our best beer slushy recipes.

Using a bia wun machine isn't necessary to make a real jelly beer at home, it just makes things a bit easier. You can also make these treats at home in your freezer. You only need a bit of patience and good timing.

As the temperature in your freezer is below the freezing point of beer, you have to be cautious not to fully freeze it. The trick is to use a reference bottle. This one goes in the freezer 10 minutes before the other beer(s).

Beer previously chilled in the fridge will need around 35-40 minutes in the freezer to reach the perfect jelly consistency. Room temperature beer usually needs 60-70 minutes.

Assuming you use beer from the fridge, you take out the reference bottle after 35 minutes. If it's still fluid, wait for 15 more minutes to check the next bottle. If the beer has already converted into a jelly slush, you can remove the other bottles 10 minutes later.

Warning: Bottles can explode when freezing. To avoid that, carefully watch the time or use cans instead.