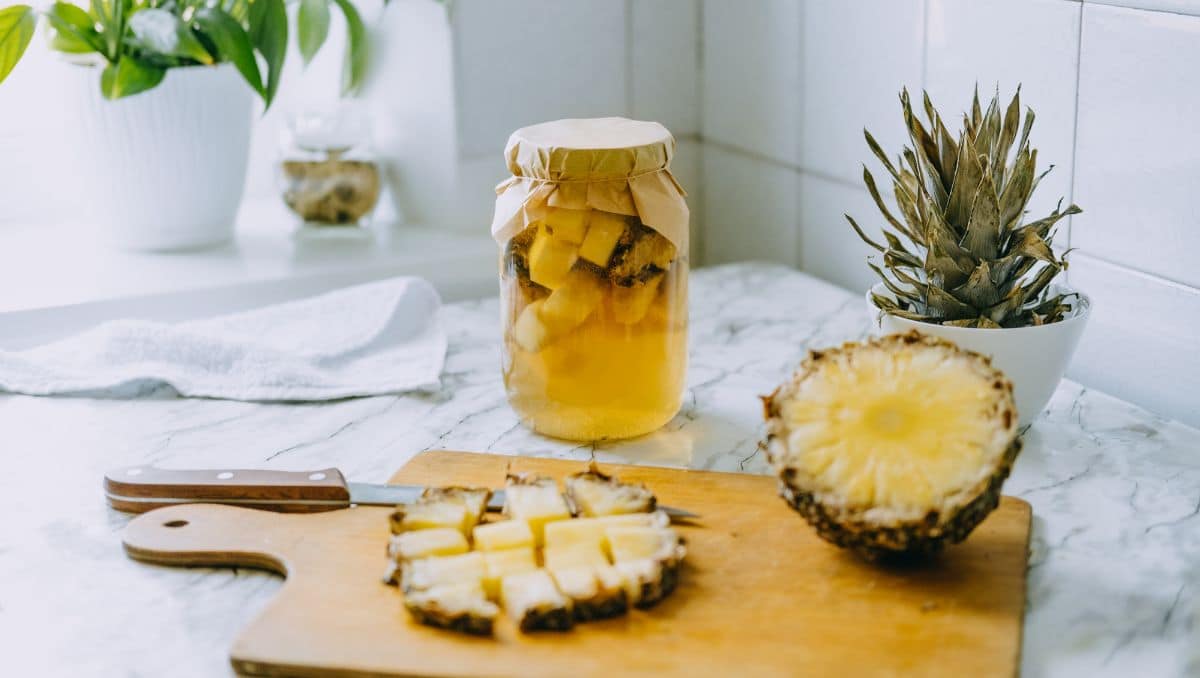 What is Tepache? And How to make it at home

Tepache is a slightly fizzy, fermented beverage made from pineapple. Learn how you can make this traditional Mexican drink at home.

Have you ever heard of Tepache? No? That is no surprise. This fermented beverage has a long tradition in Mexico but is relatively unknown in the rest of the world. -Which actually is unfortunate because it is a terrific drink.

Tepache is made from pineapple and therefore is rich in nutrients. Also, it usually contains little sugar and a small amount of alcohol. That makes it delicious, healthy, and refreshing.

Tepache is a healthy fermented beverage from Mexico. It is lightly fizzy and sweet with just a hint of alcohol. To give you an indication, typically Tepache contains around 2-3% of alcohol by volume.

To make it, all you need is the rinds, peel, and core of pineapple as well as water, piloncillo (raw cane sugar) or brown sugar, and a cinnamon stick.

In Mexico, it can happen that your Tepache is spiked with a bit of beer to increase the amount of alcohol. But this is mostly done in restaurants. If you order your Tepache in a juice bar, you'll likely get it pure.

The fermentation process of Tepache

Tepache is a fermented beverage similar to Kombucha and Kvass. The fermentation leads to a low amount of alcohol and also a bit of carbonation.

Fermented beverages and foods help friendly bacteria and other microorganisms in our body to thrive. It also leads to a high amount of prebiotics which is highly beneficial for the growth of good bacteria.

Fermentation itself occurs when enzymes break down molecules like glucose in the absence of oxygen. The result is alcohol (ethyl alcohol) and carbonation (carbon dioxide).

The process for Tepache is super straightforward because it doesn't require a SCOBY (symbiotic culture of bacteria and yeast) to start it.

You simply put the components together and set them aside. The fermentation happens naturally. (You can find the list of ingredients in the recipe below.)

Because the whole procedure merely takes two to three days, it's the perfect drink to make at home. Kvass or Kombucha often take a lot longer to ferment.

The origin of Tepache

The drink Tepache has a long history and dates back to Pre-Columbian Mexico. -A time long before the Spanish conquered the land in the 16th century.

It once had been a popular drink among Nahua people, who named it tepiātl. Tepiātl literally translates to "drink made from corn", indicating that Tepache used to be made from corn instead of pineapple.

In modern days, however, Tepache always is made with pineapple; -or the scraps from the fruit, to be precise.

Due to its pineapple base, Tepache contains plenty of nutrients. Manganese, vitamin C, phosphorus, and calcium are just some of them.

On top, Tepache also contains bromaline and antioxidants which have positive effects on digestion.

Further, as mentioned before, the fact that the beverage is fermented makes it full of prebiotics that are good for the growth of good bacteria.

Steps to make Tepache at home

Making Tepache is super easy due to its natural fermentation process and a limited amount of ingredients. The whole process typically takes 2 to 3 days. For comparison, Kombucha takes between 7 and 30 days.

Heat the water in a large pot until it boils, then remove from heat.

Add the piloncillo to the water and stir until it's completely dissolved.

Then transfer the mixture into a large mason jar and add the pineapple peels, rinds, and core.

Add the cinnamon stick into the jar and put cheesecloth on top. That ensures that the mix can breathe during the fermentation process.

After waiting for two to three days, you can serve your Tepache. Pour it over ice and enjoy a healthy drink.

The difference between Kombucha and Tepache

Kombucha and Tepache are often thought to be the same thing, but they're not.

Tepache is made with naturally fermented pineapple. Kombucha, on the other hand, is fermented tea. For the fermentation of Kombucha, you also need to add SCOBY. Otherwise, nothing will happen.

The resulting drinks are both probiotic, but Tepache usually has less sugar. Since the base for Kombucha is tea, there are often more added sugar and other additives.