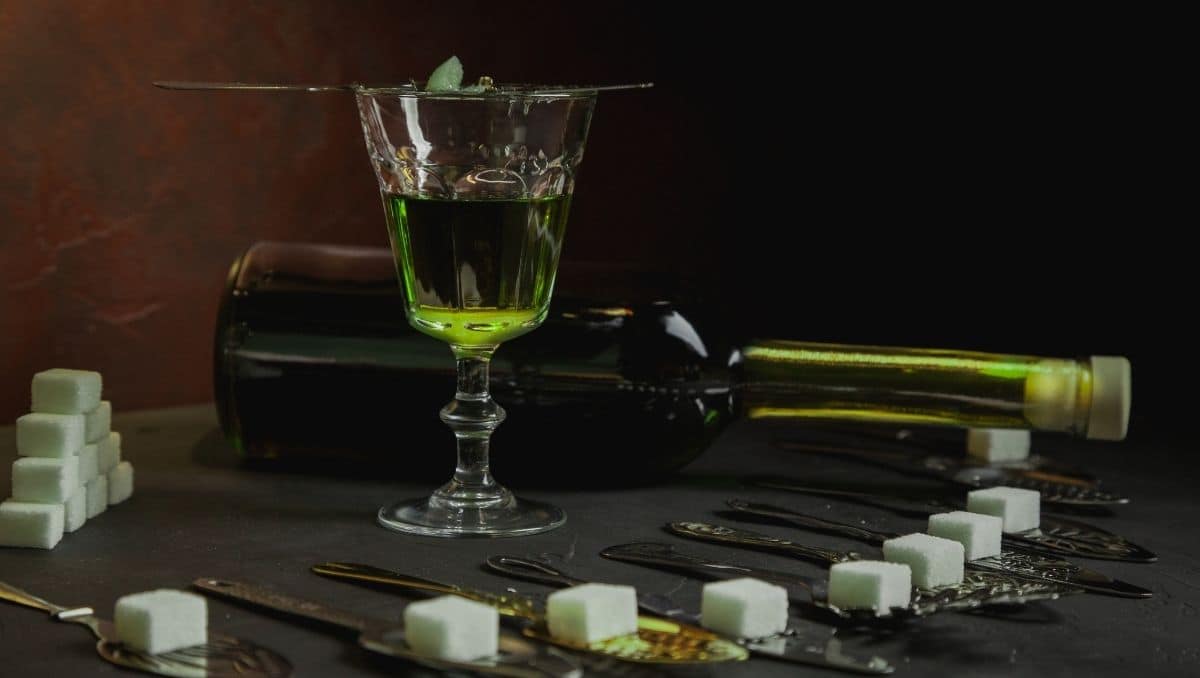 Absinthe is a very high-proof, herbal spirit. It's often nicknamed "La Fée Verte" - translated as The Green Fairy. People had many prejudices against Absinthe, and surely, it is one of the most misunderstood spirits.

Absinthe has a mysterious air surrounding it. Many countries banned it for decades, and it got blamed for the cutting-off of van Gogh's ear.

The latter is wrong, as van Gogh suffered from depression and cut off his ear after a confrontation with Paul Gauguin. No Absinthe involved.

Also, many people don't know how to drink it or even what it actually is. Reason enough to put this unique spirit and its story into the spotlight and to set things straight. And maybe you will soon be chasing the green fairy, too.

Absinthe is an over-proof, green-colored spirit made of multiple herbs. Depending on the brand, you will find an extensive range of ingredients, the most common amongst those are green anise, Grande Wormwood, and Florence Fennel.

The origin of Absinthe is in Switzerland and has an intense anise, almost licorice-like, taste. It was invented in the late 1700s and quickly won the love of enthusiastic drinkers in France in the early 19th century.

That is why most of the herbs used in Absinthe are from Switzerland or France.

This so-called "Bohemian Absinthe" employs a specific production method. You also drink it differently than Swiss Absinthe, as you can read in the section about drinking rituals.

So let's take a closer look and see how exactly the two types are different.

The classic type of Absinthe is distilled. The herbal ingredients get macerated before or during the distillation process.

Then, after distillation, the final product is ready to be bottled. Distilled Absinthes have herbal notes dominated by anise.

Right after distillation, the spirit is as clear as other spirits like Gin or Vodka. This clear version is also referred to as Swiss-style, Blanche, or Bleue.

To achieve the typical green color, distillers infuse their product with herbs in the second step of production before re-distilling it. The result is called French-style or Verte and, traditionally, cannot be colored artificially.

Quality Swiss or French-style Absinthe is also known for turning cloudy when mixed with water. This effect is called louche and is caused by the essential oils in anise that are not soluble in water.

Switzerland is, by the way, the only country that has defined legal requirements for Absinthe. And the general absence of laws led to a second, macerated version of Absinthe.

The new type of macerated Absinthes originated in the Czech Republic. For this, grande Wormwood is infused with alcohol to release aroma and the typical green color of Absinthe.

The green color is usually coming naturally through the wormwood infusion in alcohol. Artificial coloring is allowed.

While the end product is still full of herbal notes, it has a less powerful anise taste. If you're not a fan of anise, that's a big plus.

Also, the Bohemian-style Absinthe has no louche effect due to the lack of essential oils from anise.

These two characteristics, or rather their absence, are why bartenders often prefer using Czech Absinthe in mixed drinks.

A Quick Glance at the History of Absinthe

The very roots of Absinthe are in ancient Egypt. Back then, people used it for medical purposes.

But, as mentioned before, Absinthe, as we know it today, was invented in the late 1700s in Switzerland. It quickly got famous in France and reached its peak in popularity in the 1800s.

During the Belle Époque from 1871 to 1880, it was the favorite drink of many prominent figures. For instance, world-renowned artists like Vincent van Gogh, Oscar Wilde, and Ernest Hemingway, to name a few.

During this time, Absinthe was available and served almost everywhere. From cozy little Cafés to Bistros and Cabarets.

Then, in the early 1900s, Absinthe suddenly got banned in almost every country. The governments did that because of Thujone. Back then, people thought it would cause hallucinations and other unwanted side effects.

It all started in the US in 1912. France followed suit shortly after world war I began, and most other countries did the same.

Only Spain and the Czech Republic continued production and consumption. That might be the main reason why, today, the Czech are leaders in Absinthe consumption.

Why the bad reputation? -Thujone in Absinthe

Thujone is the main reason why Absinthe has a bad reputation. People accused Thujone of making consumers of Absinthe go mad and hallucinate. However, Thujone is neither a hallucinogen nor a psychedelic.

It is a chemical compound that occurs naturally in Artemisia absinthium, better known as grande Wormwood.

To be fair, Thujone is indeed toxic. But if you try to get intoxicated by Thujone in Absinthe, you die of alcohol poisoning way before. Even sage contains more Thujone than Wormwood.

Ironically, despite all that, Absinthe legalization still depends on Thujone levels. In the US, only Absinthes with less than 10mg/L are legal. In the EU, you can purchase Absinthe with a Thujone level of up to 35mg/L.

By the way, the main reason for drinkers going bonkers was

Depending on which type of Absinthe you've got in front of you, there is a different ritual to consume it properly:

The traditional Absinthe ritual for Swiss-style products includes a serving of Absinthe in a glass, an Absinthe spoon with a sugar cube on top, and a water fountain.

The water slowly drops on the sugar cube until it's completely dissolved. The water to Absinthe ratio is then around 3:1. The Absinthe will also turn milky and cloudy during the process due to the anise in the spirit.

The second, modern version to enjoy Absinthe. But it is only used for the macerated Bohemian Absinthe.

You dip a sugar cube into the Absinthe and place it on top of an Absinthe Spoon. Then you put the spoon on your glass filled with Absinthe.

When igniting the soaked sugar cube, it begins to caramelize and slowly drip into your glass. After about 3 to 5 drops, you can dip the spoon into your glass and give the mix a good stir.

With this ritual, you get warm Absinthe with a very different flavor profile than the classic preparation.

If you want to know more about the rituals, read how to drink Absinthe properly.

And always keep in mind that even if not toxic, Absinthe still contains a high alcohol level. Drink slowly, sip by sip, and always drink water in-between.

The Meaning of Chasing the Green Fairy

The Green Fairy is a well-known synonym for Absinthe. There also is a brand of Absinthe going by the name "Green Fairy".

Initially, it was just the translation of the french nickname "La Fée Verte", but it quickly became more than that.

In the late 1800s, the fairy was a common symbol in France for transformation and innovation.

When someone was chasing the green fairy, they aimed for artistic enlightenment and inspiration. And a green fairy drink was said to create a free mind where new and unorthodox ideas could arise.

A state every artist strives for to get new inspiration. Of course, this does not necessarily have to include alcohol. But back in the days, it often did.

The best way to step into the world of Absinthe is at a place that knows what it's doing. And there are not many of those as far as I'm aware.

Still, there is one city I can recommend without hesitation: the Absintherie in Prague. I've been there multiple times, and it's fun sitting in front of those massive Absinthe fountains waiting for your drink to be ready.

And they have an enormous selection of Absinthe from various countries. You can try macerated as well as distilled Absinthes while talking to the bartenders.

They will happily answer any questions you may have. And in case you're looking for more places to visit once you're in Prague, here's a list of the best cocktail bars in Prague.

It's not the most common of cocktail ingredients, but some classics include a bit of the Green Fairy's magic.

For one, there is the quite boozy Sazerac, created in the 1850s by Dr. Peychaud, who also invented the famous Peychaud's bitters.

Or you can go for the Corpse Reviver No. 2. Even though the name suggests otherwise, it's a little lighter than the Sazerac. And if you prefer something more fruity, the Monkey Gland would be a brilliant choice.

For more cocktails with the Green Fairy, including one creation of Ernest Hemingway himself, check out this list of the 10 best Absinthe Cocktails.