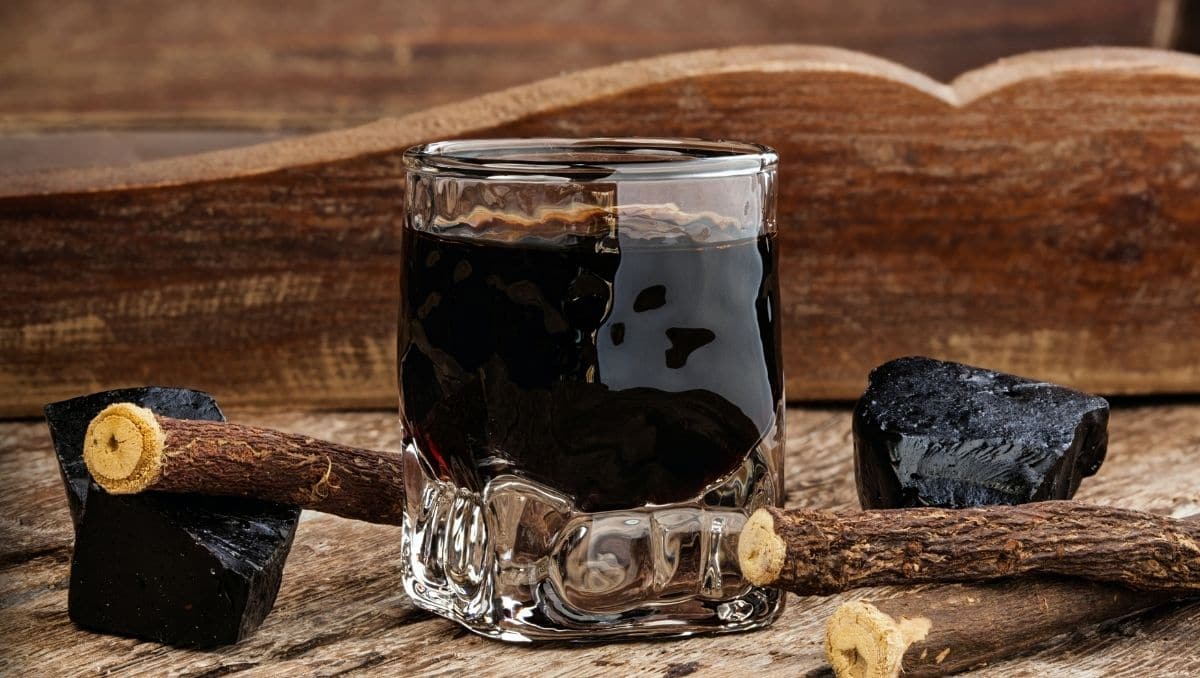 What is Licorice liqueur?

Licorice liqueur is a European specialty often consumed chilled after a lavish meal. It is a medium-ABV distilled alcoholic spirit flavored with sweetgum and other roots and herbs.

Licorice liqueur - or liquorice liqueur (UK) - is a sweet and herbal liqueur produced in many European countries. It is of dark color, it has a thick and syrupy consistency, and people often serve it as a digestif.

In Europe and West Asia, licorice is a common ingredient to sweeten and flavor candies and tobacco. For that, the extract of the licorice - also known as sweetgum- plants' roots is thickened and mixed with gelatin, starch, and flavorings. The final blend is of dark, almost black color, rich and aromatic with a sweet and mellow flavor.

Once used in medical treatments, licorice is nowadays mainly consumed in sweets. -But be mindful because too much licorice can harm you. Excessive consumption can lead to weight gain/loss, hypertension, and even licorice poisoning.

A normal intake of licorice is totally free of any health risk, though. So limit your daily consumption to 200g of licorice candies and confectionery, and you've got nothing to worry about in that regard.

Many tend to confuse licorice liqueur with other products like Sambuca, Ouzo, or Raki. Yet, even though those products might have comparable flavors, they are not made of licorice but anise (aniseed). The main reason for this confusion is that licorice and anise are sometimes considered to be the same thing when, in fact, they are not.

Anise, black anise, too, are fruits from the anise herb plant (Pimpinella anisum). Licorice, in turn, is made of the root of the licorice plant (Glycyrrhiza glabra). As you can see by their Latin names, both things are completely different. But they do share a similar flavor profile, which leads people to use them synonymously.

So if you want genuine licorice liqueur, pay attention to what you buy and check the list of ingredients. If the bottle label states anise, there's most likely no licorice in there at all.

The taste of licorice liqueur

Licorice and likewise licorice liqueur is very polarizing. Traditional products have a bittersweet flavor with slightly herbal, floral, and woody notes. In Scandinavia, licorice sweets and liqueur often have a salty taste. In Finland, Netherlands, and Greenland, salty licorice is one of the most famous sweets you can get.

Licorice candy bought in supermarkets often has an artificially sweet character, far from the authentic licorice taste. The reasons for this are easy to explain.

First, licorice is relatively expensive, and using a higher amount of it drives up production costs. Therefore, manufacturers add more sugar to their sweets. And second, the more licorice in a product, the fewer people like it.

That emphasizes the polarizing character of the licorice flavor: Even people who do like licorice candy are turned off by the taste once trying the real and intense taste of licorice.

In Scandinavia, especially in Finland, you can find a large variety of licorice liqueurs. Besides these Northern countries, Italy accounts for most of the world's licorice liqueur production.

In case you want to make homemade licorice liqueur, here's a great recipe for Italian-style licorice liqueur. But as making liqueur is not for everybody, we also collected some of the best ones to present them in this article.

Now, here's a list of some of the finest licorice liqueurs out there.

Saamani Salmari is available in a blue and red expression. Should you just get started with licorice liqueur, opt for the blue one. It's milder in taste but still has an authentic and bittersweet taste of licorice.

The red version is for hard-core licorice lovers. The bold, herbal, bitter, and sweet notes reflect the real taste of the licorice root. And while that's too much of a flavor bomb for most, connoisseurs love it for delivering the full array of flavors.

Gatta Nera literally means "black cat". The name alludes to the dark color of licorice, and it consists of some unusual ingredients. Gatta Nera liqueur is made with Prosecco grappa, licorice, and peppermint extract from plants growing in Calabria.

The licorice and peppermint dominate the taste in a harmoniously balanced way. Sweet, full-bodied, and fresh with exciting bitter accents, Gatta Nera is a sensational digestif for a culinary evening with friends.

The Koskenkorva licorice liqueur was launched in the 1990s. Demand for this liqueur based on Koskenkorva Vodka was so high that it got banned by the Finnish government shortly after the release.

In 1995, a new and lower-ABV version of the liqueur was introduced. This one wasn't banned, and it's still available today. And it is among the top 3 liqueurs sold in Finland.

-And rightly so. The flavor of Koskenkorva licorice liqueurs is rich and smooth, with an authentic aroma of salty licorice. Although it's relatively high ABV for a liqueur, the alcoholic bite from the Vodka is barely detectable. Instead, it adds a warmth to the liqueur that makes it even better.

Bottega Licorice liqueur certainly has one of the most elegant bottles. And the liqueur also tastes deliciously complex and smooth.

The base for Bottega's licorice liqueur is roots harvested on the Ionian coast. The result is a dark and velvety liqueur with a rich taste that works best as a digestif, in cocktails, or as an alcoholic addition to desserts.

If you want, Salmiakki Dala is somewhat of a licorice-forward Scandinavian take on an Amaro. And for better balancing taste and color, caramel is added to the mix. All in all, it's perfectly smooth liqueur that also works great in cocktails and as a salty Amaro substitute.

Canada is certainly not the first country you think of when talking about licorice. However, Dr. McGillicuddy's licorice liqueur is a nice take on it. The taste is less intense and complex than that of the other bottles in this list, but it's a great entry-level option for everyone new to licorice.

The retro-design of bottle and label take you back to the prohibition era. A time when alcoholic liquids were often consumed for medical reasons as there were no legally allowed alternatives.

Fisk is an expression from a Northern European country. The family-owned company produces its rich licorice liqueur in Denmark. Fisk is also often called the "inofficial spirit of Scandinavia".

Based on Vodka, Fisk gets flavored with licorice and additional herbs. Similar to Salmkiakki Dala additional ingredients go into the recipe. For example, eucalyptus and menthol.

Apart from drinking it as a shot, the licorice liqueur is beautifully suited for serving it in combination with coke; -Reminding of a Latin American special, the Fernet and coke aka Fernandito.