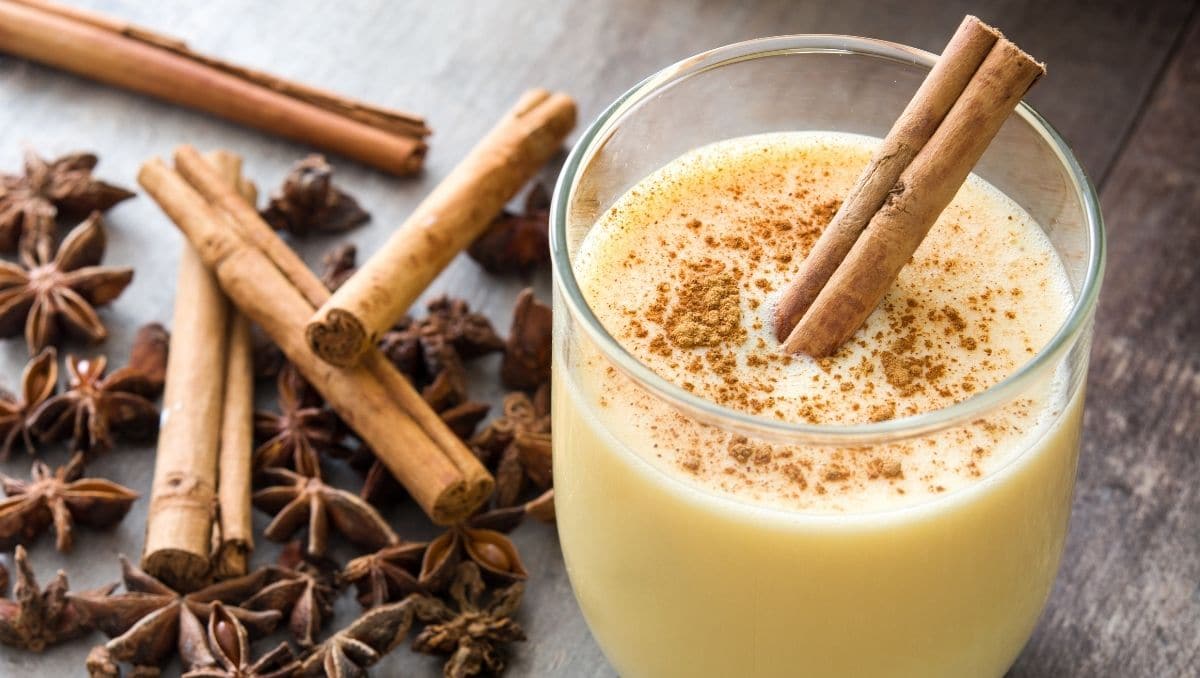 Eggnog is a rich, creamy, and sweet drink traditionally made with milk, sugar, cream, and eggs. It can be either alcoholic or non-alcoholic.

Christmas isn't complete without eggnog. The delicious festive drink comes in countless variations and is a staple at most holiday parties and dinners during the festive season. But despite the love for this traditional cocktail, there are many concerns about potential health issues linked to the consumption of raw eggs.

So let's find out more about eggnog, what it is, where it came from, and if it's safe to drink.

In brief, eggnog is a rich and creamy drink made with egg whites and yolks combined with various spices. There are plenty of variations on the recipe, and most of them include spirits to spike the beverage.

Typically, eggnog is consumed cold, but you can also enjoy it warm. -Especially if you're coming back in from the snow and need a warm drink. Spiked with your favorite alcohol and spiced with vanilla, nutmeg, and cinnamon, eggnog can be the perfect winter drink.

Where does it come from?

Even though the history of eggnog is debatable, the roots of the creamy drink most likely are in Europe. And not only is its origin is subject of the discussion, but also the name itself is a mystery.

The Oxford dictionary claims that eggnog derives from the word "nog", which refers to a strong beer brewed in the late 1600s. Other sources claim that nog is related to the term noggin. A noggin is a small drinking mug or cup made of carved wood that once was used to serve alcohol. But whatever the roots may be, the term eggnog is most likely an American invention. At least, that is what most researchers can agree on.

The drink itself and its ingredients go back to an old English drink called posset. Posset is a drink from the early medieval age made of hot curdled milk mixed with ale or wine and spices. Some recipes also included eggs. The rich drink has been popular in Britain from the 13th century until the 19th century.

During the 18th century, British colonists brought the recipe to the US. But while the English version primarily included Sherry, Madeira wine, or Brandy, the colonists had to use something else. Brandy and wine were heavily taxed, so they did replace them with more affordable options like Rum and later Bourbon.

Ingredients to make a perfect eggnog

Recipes for eggnog may vary, but the key ingredients stay the same. Milk, heavy cream, egg whites, egg yolks, and sugar build the base of the liqueur. And spices like vanilla, nutmeg, and cinnamon are responsible for that Christmasy taste. The last and optional ingredient is alcohol. Unless you want to avoid alcohol, this final addition is the secret sauce for any eggnog recipe. And you have countless possibilities here.

What kind of alcohol to use in eggnog?

Spiking eggnog with alcoholic ingredients has a long tradition. The original British version contained wine or strong ale. Later, dessert wines like Sherry or Madeira wine replaced them. Today the most common spirits in eggnog are Rum, Bourbon, and Brandy. And of those, Brandy is the most traditional ingredient while Bourbon is the most common one. At least in the US.

But looking at other countries around the world, there are many other interpretations. Puerto Ricans have their own recipe called Coquito. It features Rum, coconut juice, and coconut milk. The Mexican version, also known as Rompope, uses Mexican cinnamon and Rum. The Peruvian version called Biblia con Pisco uses Pisco to spike the eggnog mix. And also, the Germans have their take on the classic eggnog called "Eierpunsch" - a combination of white wine, water, Rum, eggs, sugar, citrus juice, and spices.

But it doesn't have to stop here. Eggnog is a perfect drink to experiment with different spirits. For instance, you can also try a combination of Mezcal and Creme de cacao - perhaps even homemade Creme de cacao. Alternatively, you can do a mix of Añejo Tequila and sherry. Time to get creative!

Is eggnog safe to drink?

Using uncooked eggs in drinks is always a polarizing thing. Having raw egg white in Sour cocktails like a Whiskey Sour or Mezcal Sour is totally safe, but eggnog can be problematic. Egg white in a sour cocktail is cooked by adding acidic lemon or lime juice. But in eggnog, we don't have such an ingredient. As opposed to common belief, alcohol doesn't sterilize raw eggs. So what should you do?

First of all, most likely, you won't have any problems consuming raw eggs in the shape of homemade eggnog. But in general, people with a weaker immune system, including elderly persons and small children, should avoid it.

But there are things you can do to make it safe. Store-bought versions of eggnog are safe to use, of course, so what do they do?

Another possibility is to "cook" the eggs. Well, not actually cooking them, but slowly increasing the temperature up to 160°F to kill all possible bacteria. The procedure is quite simple. In this case, as we aim to make eggnog, warm up milk in a saucepan with spices like vanilla, cinnamon, and nutmeg. Then slowly add the mix to your raw eggs in a bowl (not in the saucepan). Make sure to do this slowly and step-by-step. You don't want to curdle your eggs.

Once everything is combined, transfer it back into your saucepan and slowly heat it up to 160°F. Et voila, you just created a safe version of eggnog.