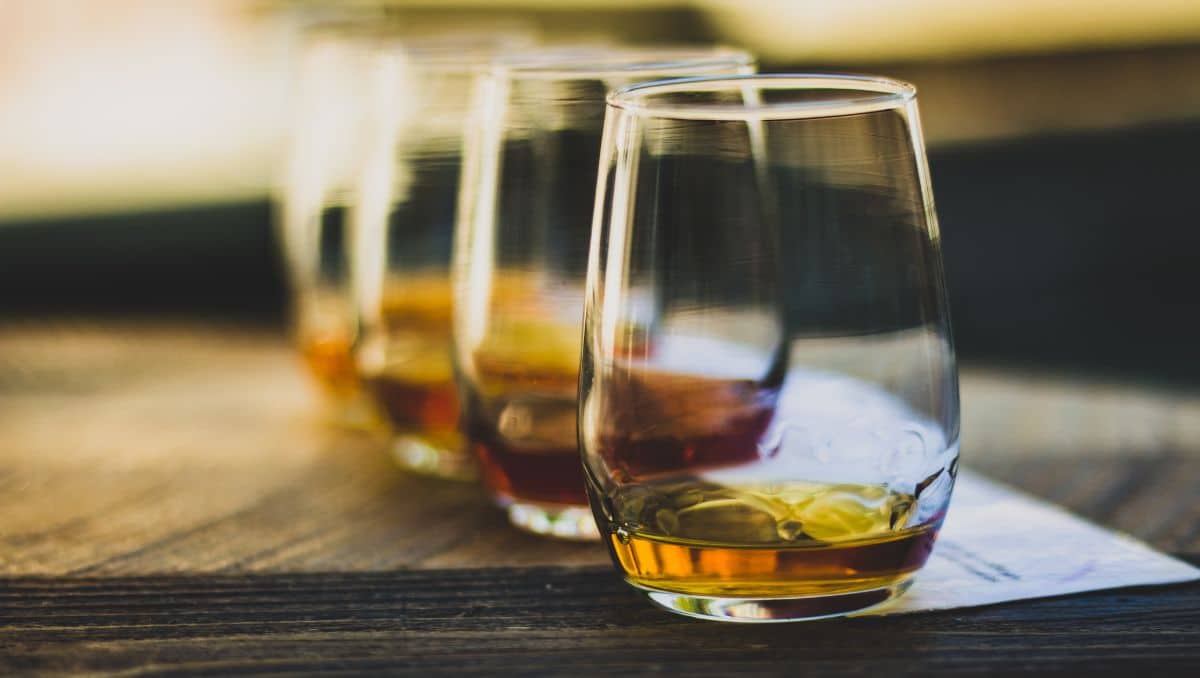 The 11 Different Types of Rum explained

Rum is a remarkably diverse spirit. It comes in different styles, is made from various ingredients, and often has a distinctive taste depending on its origin.

Understanding the different types of Rum is not so straightforward. Whereas most spirits follow strict and precise regulations and controls, Rum is like the Wild West when it comes to classifications.

There are not many rules that describe how a Rum should be produced. Also, there's no regional limitation.

Yet, there are some areas in the world that are more known to manufacture the spirit. But this has mostly to do with the availability of the base ingredients like sugarcane.

This article is not only about the two main types of Rum - White and Dark - but also about the many different styles and variations that make Rum selection one of the more difficult things in bartending.

But first, let's see about what Rum actually is.

Rum is a distilled spirit that must contain at least 40% ABV and is made from a sugar base. Typically, the sugar base is either fermented sugar cane juice, sugar syrup, or molasses.

Often, Rum is aged in wooden barrels made from oak. Further, it usually is produced in countries known for growing an abundance of sugar cane.

That's also why Rum is can be found in many Caribbean countries like Jamaica, Puerto Rico, Cuba, Barbados, and the Dominican Republic.

How Rum is made

Yet, the standard method of making Rum is easily explained. And most brands follow this process (more or less):

The two main types of Rum are White Rum and Dark Rum. White Rum is the most common Rum available and ages up to 1 year in stainless steel tanks.

The taste of White Rum is light, crisp, and vibrant, making it a perfect ingredient in many classic Rum cocktails like the Mojito and Daiquiri.

The term Dark Rum is a bit more complicated as it unites all Rums that are not clear and see-through. It can be a rich and aged Rum but also a shortly-aged golden version, or -worst case- simply colored with caramel coloring to visually imitate barrel-aging.

Aged Dark Rums have a rich and aromatic taste. These full-bodied Rums work great in the Hurricane cocktail or as a float on top of a Mai Tai or Piña Colada.

Within these two main types of Rum, there are numerous individual styles and classes. From Navy Rum to Cachaça, which I will explain now.

The different types of Rum explained

White Rum is usually less aromatic than Dark Rum. It has a bright and crisp taste and is commonly used in long drinks and cocktails.

Like all Rums, it's aged -even though only shortly- and contains at least 40% ABV. Most White Rum is aged for only one year in stainless steel tanks, but some products mature in barrels, too.

To remove the amber shade the spirits adapt from aging in wooden barrels, they get filtered before bottling.

Typically White Rums are also more affordable than Dark Rums. As with Whiskey, that primarily has to do with the time that goes into aging.

Due to the time in barrels, Rum turns darker over time. The longer the spirit ages, the darker the color will be.

The taste of golden Rum is more complex and sweeter compared to white Rum. Therefore, cocktails that need a bolder Rum flavor often ask for golden Rum instead of a white one.

The problem with gold or golden Rum is that not all of them get their golden color from aging. Some merely are colored with caramel color. That changes the color but, unfortunately, not the taste.

Gold Rums that did indeed age to achieve their color can also be sipped neat or on the rocks. Artificially colored ones are usually not adequate for sipping.

Dark Rum is a generic term referring to all Rum that is not white. You can find all kinds of Rum labeled as "Dark" - from a golden color to almost black.

In most cases, though, Dark Rums aged longer than gold Rums. That makes them even more flavorful and complex in taste.

In cocktails, a Dark Rum is often used when a drink needs a full-bodied and robust base.

Black Rums are the darkest and most aromatic type. Their color is almost black, and the taste is typically rich and sweet.

Most Black Rums are made from molasses. Molasses is a thick and syrupy liquid - a leftover product when producing crystallized sugar.

The color of Molasses is a dark brown, which ultimately also makes the color of the resulting spirit a lot darker.

Molasses is also richer in taste than regular sugar cane juice or syrup. It has a strong taste of caramel. Thus, sometimes burnt caramel is added to Black Rums to intensify their flavor and color.

Premium-aged Rums are the finest Rums you can get. They often age for many years and are sometimes blended to achieve the perfect balance in taste.

As barrel-aging for a long period of time results in higher costs for storage and a long wait before earning money with the product, these Rums are also the most expensive category.

When a Rum is labeled Premium or Ultra-Premium, the age reference on the bottle indicates the youngest Rum in the blend.

So, if a blended Rum states that it's 19 years old, all Rums in the mix have spent at least 19 years in a barrel. Oftentimes, some of the Rums in the blend are way older than the label states.

Rhum Agricole is a type of Rum typically produced in the French parts of the Caribbean. The most renowned region for producing Rhum Agricole is Martinique, followed by Guadeloupe, St. Barths, Reunion island, and Mauritius.

The taste of Rhum Agricole is unique and widely different from a classic Rums. It's significantly more grassy, herbal, and earthy. The reason for this is the unique way of production.

Rhum Agricole is made from fermented sugar cane juice, distilled to contain 70 percent alcohol. Most other Rums, especially the Molasses-based ones, contain way more alcohol at this point.

This relatively low amount of alcohol ensures that the Rum keeps as much flavor of the original sugar cane juice as possible, resulting in a more grassy and earthy taste.

Rhum Agricole is typically available as Rhum Blanc, a light Rhum aged six months before bottling, and Rhum Vieux (old/aged Rum), a Rhum that aged for at least three years in wooden barrels.

Today, Cachaça is seen as an own category of spirits. But because the Brazilian sugar cane spirit is the origin of all Caribbean Rums, it belongs on this list.

Cachaça is typically only aged for a few months before bottling. It's a clear spirit with a bold flavor profile.

It is best known for its use in Caipirinhas, Brazil's national cocktail. But Brazilians often use it as a replacement for White Rum due to the similar flavor profile.

There are also some rare barrel-aged versions sold as Cachaça Artisanal. These small-batch Cachaças are distilled in pot stills to retain as much character in the spirit as possible.

After distillation, the age of the artisanal spirit ages in wooden barrels to develop a richer and more complex flavor.

As the name suggests, Navy Rum had once been the usual serving in the British Navy. Over time, the term got associated with full-bodied and dark Rums that contain slightly more alcohol than other Rums.

Navy strength Rum usually contains 54-57 percent of alcohol. It's a fantastic ingredient in many Rum cocktails, especially in Tiki drinks.

The reason Rum was so popular with the British Navy is that it travels a lot better on ships than other spirits like wine or Brandy.

Later on, the combination of Navy Rum and lime juice turned into one of the most popular Rum cocktails, the Grog.

Many cocktail recipes ask for spiced Rum as this type of Rum features a broader flavor spectrum. -Every version uses another set of spices.

The spices used to flavor Rum are fruits, seeds, herbs, roots, rinds, and even flowers. These aromatic ingredients infuse the Rum and make the flavor profile a lot more complex.

The most common flavors of spiced Rum are ginger, vanilla, allspice, cinnamon, cassia, and cloves. But the possibilities are endless, from citrus fruits to mind, cherry, tropical fruits to coconut, and the list goes on.

Most Rums contain between 40 and 50 percent of alcohol. Everything above 50% is labeled as Overproof Rum. Remember, Navy Rum is usually overproof.

One prime example of overproof Rum with a significantly higher ABV is the 151 Rum. This Rum is famous for its 151 proof, a whopping 75,5% of alcohol by volume.

And that's not the end. Some bottles contain more than 80 percent alcohol. For example, Sunset Very Strong Rum from St. Vincent has 84.5% ABV (169 proof).

But as US regulations prevent importing Rums of more than 155 proof, the number of brands producing these extremely potent spirits is limited.

Aguardiente literally translates to "fire water" and is also typically distilled from sugar cane. Aguardiente is quite common in Latin America, where it passes as a cheaper alternative to Rum.

The flavor of this unaged spirit is quite robust and vegetal. That characteristic makes it a great fit in local cocktail creations, for example, in a Cuban Canchánchara.

Depending on the region, the taste and use of Aguardiente differ. In Colombia, for instance, Aguardiente is flavored with Anise.

In Caribbean countries, it's often mixed in cocktails, whereas in the Andean region, the spirit traditionally is consumed neat.

Rum is thought to be one of the oldest spirits. The origins probably date back to the 1300s when "a drink distilled from fermented sugar cane juice" was mentioned in Sanskrit texts. This first version of Rum was called Shidhu.

But there are many other mentions of Rum-like beverages throughout Asia. A Malay drink called Brum, also made from fermented sugarcane, is already thousands of years old.

And in Iran, a Rum-like drink was served to Marco Polo which he described as "very good sugar cane wine".

As mentioned above, the birthplace of modern-day Rum was most likely Brazil. Records of production date back to as early as the 1520s. From there, Rum found its way to Barbados and to the rest of the Caribbean.